How to hit the golf ball high to get over trees and get to tucked pins.

Day 3: How to Hit a Fade Shot in Golf 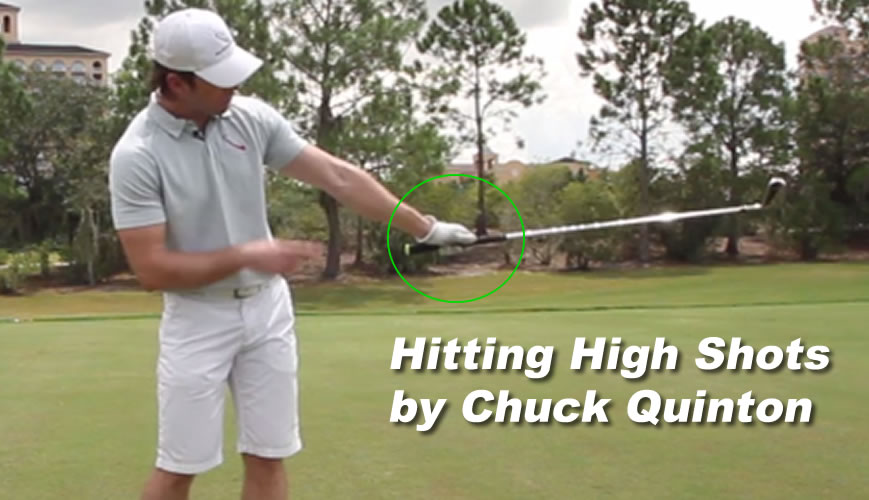 When does this come in handy? You hit it behind a tree. You need to get the ball up in the air, or you're going to a really, really tucked pin like you see on PGA tour these days, and your landing area is only this big and you're coming in with a 5-iron. Well, how are you going to get that 5-iron to stop? This is how. You start learning how to let the club release to hit the ball high.

Now, when I did the video yesterday and I showed you how to hit the ball low, you were holding the release off and manipulating and bowing your wrist extra in order to get an exaggeratedly low shot. When you go to hit the ball high, it's a lot easier, because you're actually just letting the club release a little bit more usual. Yesterday, I was teaching you how to hold it off to get control of that club face. Today, what we want to do is start letting the club face release.

Now, depending on the shape that you're wanting to hit will depend on what the club face release looks on this side of the ball. So, in this case, this would be a high shot, maybe a little bit to the right. I can still release it and hit a draw, but you'll notice as I release the club a lot, instead of being like this like it was on the first day ... my wrist was still a little bowed in the first day's drills, now I'm going to let my wrist re-hinge, and you'll notice in a full release position, the club face is toed up instead of toed in. All the difference is, is whether or not I let my wrist re-hinge on the other side.

What I'm trying to do when I hit the ball high is I'm letting the club face release, and the wrist be into a neutral position, and then re-hinge, because that's going to still allow the club face to continue to rotate to square up. So, the good thing is, this one's really easy, because most of you guys are already phenomenal at this, because you tend to flip the club a little bit too much with your right hand.

I want you to learn how to do it with the control hand first before you put that right hand back on there. So, start allowing the club face to release and re-hinge and come around to a toed up position. That will give you a straight shot that will still be very high.

Yesterday, I was trying to get the ball to roll literally along the ground. Today, I want to do the opposite. Instead of hitting it under your dog, we're going to hit it over the dog. Now we want to allow that club face to release, our wrists are starting to re-hinge, but at first, don't try and flip it. Don't use your thumb to push the shaft. I want you to use the momentum of the swinging club head to release it, so let's get a feel for that. My wrist is nice and soft, club face released. Nice and soft, club face released.

As I step up to hit a shot, club face release, ball went up in the air. So, that one went this high, but it only went 20 yards. Start working on that to get the feel of how your wrist has to be soft versus a little bit firmer when you're holding off the release, and start getting the ball to go more on line. You'll find the balance where at first, when you're starting to let this release, you may find that you hit it out to the right a little bit too much. You're just going to find the balance between letting this wrist re-hinge and letting the club release back to the left, and you'll have it down no problem.


JOIN OUR 401,489 MEMBERS AND GET INSTANT FREE ACCESS TO DOZENS OF VIDEOS!