In this video, I use our TrackMan launch monitor to show you how my pro student uses RST fundamentals to produce dead straight shots. You'll find out how a quick change in your golf posture can significantly affect your swing path. Check out this video now to attack the flag sticks! 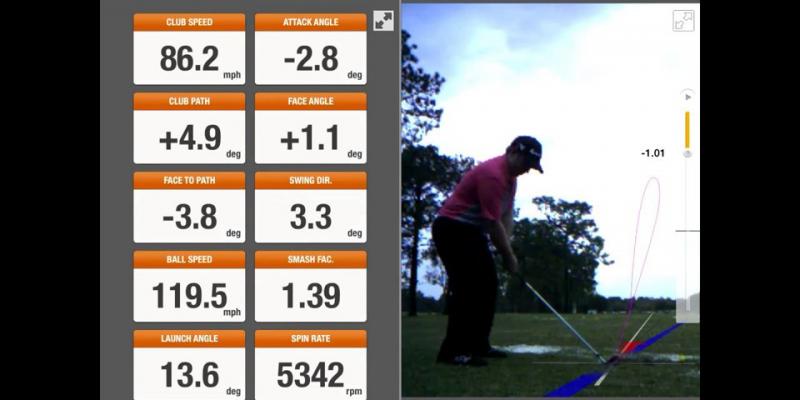 I'm going to talk about how we use Track Man and how the RST fundamentals validate all the work that we're working on our golf swings to help you hit consistently straight golf shots.

I'm going to pull up a professional student of mine and walk you through an example of not only how important the fundamentals are to helping you hit straight shots in RST; but also how using modern technology such as a launch monitor like Track Man can help you understand how to work through these fundamentals.

I've got three different groupings of swings here. The first one we're going to look at is this guy here. I want you to notice one number here. Notice the club path on this side, this is the column that we want to be focusing on. This is going through in a sequence. We started here, went to this swing, this group of swings, then we ended up with the ones at the top. Notice that the averages went from four point nine to three point two to point six. that's a big difference in a short period of time. Here's what I want you to focus on.

The first thing is is we look at this swing here, you're going to notice that the blue line that we see here is representing the club, the path that the club is traveling on when the ball was fully compressed on the face. You'll note that the white line here in the middle is the target. That's the target line. The blue shows that the club was working well out to the right, or into out at impact. The club face, the red arrow here shows that the club face was pointing left of the path at impact, but right of the target line. Of course, this is going to create a shot, all things considered equal, that's going to end up well left of the target which is represented by this pink and purple line here. You can see that this is the actual flight of the ball.

As we walk through this, we're going to notice a couple of things. One that club, the ball's turning around that purple line and then it's going to hook 15 yards or so, 10 or 15 yards to the left of the target. That's obviously going to cause a missed a green. That wasn't necessarily a bad swing, but it's really hard to put all of these pieces together when that club is working this far out to the right. You have to get everything just perfect to get the ball to line up back on the target. Of course, one of the things I talk about a lot is zeroing out that path. What I mean by that is that this blue line would be traveling straight down the target line, that white line, at impact. Then all we'd have to worry about is getting that club face to line up with that. That's the ideal goal on a swing.

In this student's case, we had a couple of things that were going on. The first one that I wanted to fix, I work through things in sequence here, is I wanted him to feel 100% left arm. That's what this next grouping of swings is here. We made a pretty big jump. We went from about five degrees to three point two degrees, in to out. You can see all of these swings here are a little bit closer. We'll take a look at one here.

Here's one where he's just feeling 100% left arm dominant. He didn't have the face pointing in the right direction on this one, but what we did see is the path was a little bit better, about 30% improvement. Obviously him feeling a left hand only wasn't being able to focus on the golf swing release. I don't consider this a bad result even though the ball went further off line than we had before on this particular swing. The goal was we were working on getting that path. We can worry about the club face later. That part's the easiest part to fix. Getting that path to work out has a lot of complicated factors into it. So we made progress here.

As we continue to work through some swings, works through some different shots, we got a little bit closer, a little bit closer. But, one of the things you're going to notice, that we made the biggest change on was going to a much more upright posture for him. If you look at this swing compared to the ones that we were looking at before, he feels like he's standing straight up and down. Keep in mind, your swing plane and path, a lot of it is dictated by your spine angle and how that dynamically changes throughout the shot. As he was coming through, he was tending to lose his posture, lose his tush line, and that would cause his hands to raise up more through the hitting area; and that would cause the club to work out to the right. Now as we walk through, you'll notice now that the club path, that blue line is literally exactly on the target line. This is a zero point zero path. Again, club face was just a hair open here. We work on these pieces bit by bit.

As we fix the golf club path, now if he gets that club face squared up every time, that ball's going to fly absolutely dead straight and stay on line. More importantly, has the opportunity to start on line rather than always starting right or left of the target, and then having to curve back. That's the hardest way to try and control a golf ball. If we can get it to start on line and stay on line, life becomes a lot easier.

As we worked on just a postural change, you'll notice a big change in his path. We actually had a couple that went negative, which he never does. He tends to be way in to out. As he's working through these changes, bit by bit, everything changes a little bit. He feels a little different, but his shot deviation became more much more constant as he got closer and closer to zero on his path. That's what we were working on. We want to always try and zero out this path, and get as close ... Here's one where he actually came over negative slightly. You'll notice the difference in the shot curvature, just a tiny little controlled fade. Again, all just basic RST fundamentals.


JOIN OUR 396,884 MEMBERS AND GET INSTANT FREE ACCESS TO DOZENS OF VIDEOS!