Lower body stability is key for power and accuracy in the golf swing. This drill will help you build a powerful base. 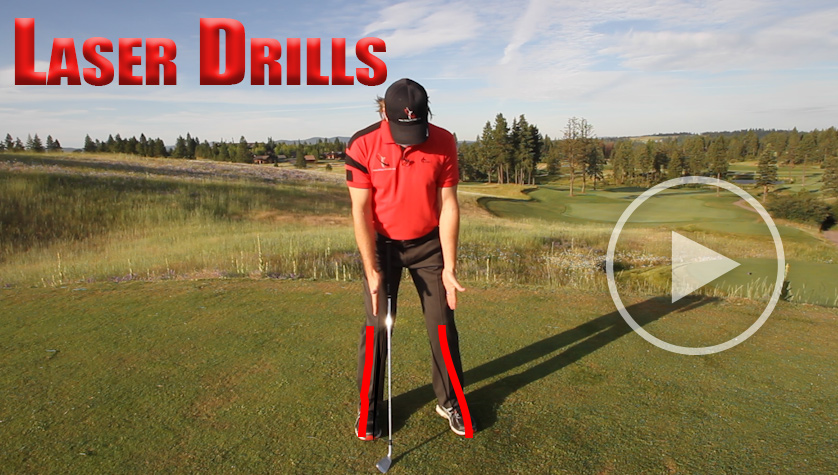 Building a powerful base is one of the most important golf swing fundamentals there is, and it starts with the knees. Yep, your knees are a critical component of the backswing that show you whether or not your body is moving correctly. Too often, golfers let their right knee rotate too far during the backswing, leading to a lack of power and making it very hard to shift their weight during the downswing. You can also see this with their left knee as it buckles in toward the right. This is a very weak position to be in and a difficult one to recover from.

In this golf instruction video by RST Founder Chuck Quinton, you'll get two great visuals to help you build a solid base like a big old oak tree that will not only help you build more power in your golf swing, but more consistency as well. If you're struggling with consistent iron play, take a look at your knees in your backswing and see if they're moving around too much like demonstrated in this video.

One of my favorite concepts is the idea that I created about having laser beams coming out of your knees and that's because in the swing a lot of times the knees are a good indicator of where incorrect movement is coming from in the golf swing. So a lot of times what we'll see, we'll focus on the right knee first going back. A really, really common swing fault is for people to start rotating their pelvis a lot during the backswing rather than rotating from their rib cage and their torso and keeping their hips more quiet. They start rotating their hips right away and they start rolling to the outside of their foot and their knee, if I had a laser beam coming straight out of my knee, starts pointing way behind their foot. So now, all of a sudden, you can imagine, this is not a very powerful position to be in. It doesn't look very powerful, does it, right, and it's not. Anything else you were trying to do, if you were trying to throw a ball from this position, this would be really weak, but it's extremely common in the golf swing for people to let this right knee rotate out way past their foot.

Well, a simple visual for it is imagine that your right knee had a laser coming straight out of the knee and it's kind of pointing at the ball. Now it doesn't need to be kicked in that far at address, that's too much, but at set up make sure that it's kind of pointed in a little bit. Technically it's going to be kind of more over your foot, but we just don't want it way out here, but the big key is going back you want to make sure that it doesn't point ever outside your foot. You can see as I start doing this, notice that my foot starts to roll over a little bit, right? All of a sudden I get into this really weak, awkward position and it's really hard for me to shift my weight on the downswing.

So as you go back, imagine that that knee stays pointed where it was at address. Now technically I want, the knee needs to rotate a little bit, but most people when they struggle with this and they turn their pelvis too much in the backswing and they lose all of this stretching motion that we need in our core. When they do that all of a sudden they're going way out past their foot. It can rotate a little bit, but you want to make sure that it kind of, imagine that it stays pointing never past your toes. So if you do that you're going to have a good loaded up position in the backswing.

Now the other thing that they tend to do is that you can see this movement from the left knee. So we've got this right knee with a laser coming out, imagining that we're pointing more at the ball and that it doesn't ever point out behind our foot going back. The left knee, the common problem that we see is the left knee kind of doing this. Again, they're both kind of caused from the same thing. Instead of rotating from your core you start rotating your hips really early and get in this really weak, awkward position and the left knee is point way back here behind the ball.

You want to imagine at set up your left knee, the laser is kind of out over your foot, over your toe and as you go back that it stays there. Now, again, just like the right one, it's going to actually come in a little bit, but we don't want to see this kind of stuff because then all of a sudden as you do this it's going to affect your pelvis. You're going to have a tendency to have this nasty reverse pivot, your hips are going to be overturned and all kinds of other issues are going to arise from that. We want a nice, stable lower body, a stable base for everything else to move on top of, so this left knee, as you go back, imagine that the laser points forward toward the ball, never back behind it. Now, again, technically it can actually move back behind it. This is more of a visual or a feeling, but as you do that you're all of a sudden going to go from this position, which is going to be impossible for you to generate any power from your lower body, to this position, where I'm on a nice, stable base and I can feel my glutes engaged.

So imagine you've got lasers coming out of each knee and they're essentially kind of always pointing over your toes or just barely inside of them. We don’t want this right knee ever pointing way back behind your right foot and you never want this left knee pointed way back behind the ball and you'll have a much more stable base in your golf swing.

Join RotarySwing today with our lifetime guarantee and get immediate access to this and 500+ other instructional videos!