Squat to Square in the Golf Downswing

Squat to Square in the Golf Downswing

If you watch golf on TV, it seems that you can't turn your hips fast enough or far enough in the downswing. This video gives you a great drill that shows you exactly how far you actually need to focus on turning them. 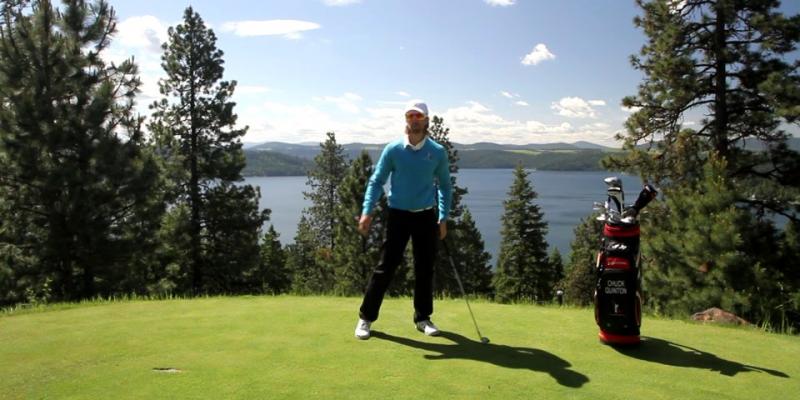 at the top of my backswing, they're going to be about 45 degrees closed in relationship to that target line. So how much should I try and rotate them in the downswing? Well, if you listen to the commentators on TV all the time, it's turn them as far as you humanly possibly can. Now of course, that's going to create tons of problems. We've got tons of hip spinners who push really hard off this right foot in the downswing. The right heel is way up in the air. They stand up out of their posture. The club starts going way to the right and we've got a whole nother slew of issues here.

The reality is, a better way of thinking about it is squatting to square rather than just turning your hips as far as you humanly possibly can. As we get to the top of the swing my hips are now 45 degrees [shut 00:01:24]. As I start my downswing what I'm going to do is squat back to square rather than pushing hard off the right leg. As I do that, notice that my hands get brought basically down to the delivery area. From here all I've got to worry about, five minutes of perfect golf club release. I just need to release the snot out of that golf club and let it go.

As long as I haven't turned too far and gotten away from the inside, I'm now in a position where I'm very stable. I'm anchored. My glutes, quads, hamstrings, everything are activated and I can [inaudible 00:01:54] start to push up off the ground and release the snot out of that club with my left hand to get a tremendous amount of speed. All you need to think about from the top of your backswing is squatting back to square and then just releasing the golf club. You don't need to try and turn any more than that. Once you squat to square and you start to release the club, you're just basically pushing off the ground with that left leg that's going to allow you to then more forcefully release the golf club.

Squat to square is a great way to learn to accelerate your hips the right amount. It's the first thing that you're going to do in your downswing as you shifted your weight. Then from there basically push up off that left leg and that's going to force the club to release more. You'll have both the hip acceleration because as you squat in this square you're going to turn a certain amount and as you begin to push up off the ground, you've decelerated the hips. Those two movements together are going to help you start to build a very powerful downswing movement with your lower body and get the proper amount of hip rotation in the downswing.

Get Your Free Membership to Finish Watching "Squat to Square in the Golf Downswing" Right Now!

Get Your Free Membership to Finish Watching "Squat to Square in the Golf Downswing" Right Now!