Are you ready to maximize your club head speed at impact? If so, you need this missing piece from our wildly popular "Throw the Ball Drill" video. In this Part 2 video, you'll get a drill to ingrain the proper release point for your wrists and arms. 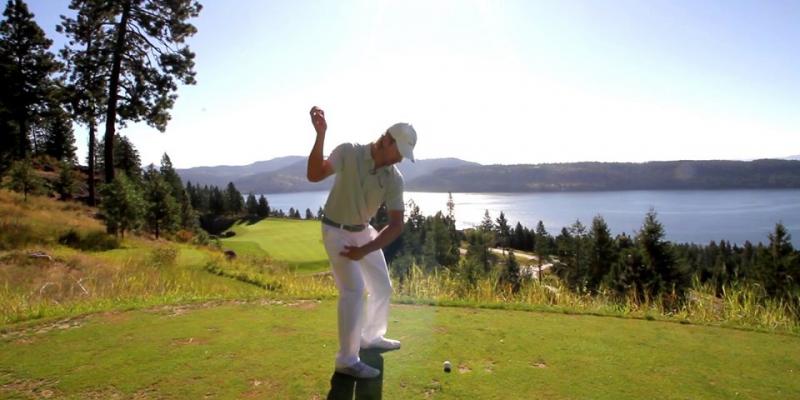 One of the most common questions we get about the throw the ball drill is, "Where exactly do I throw the ball?" The answer to that, I want you to think about it for a second because it really helps you understand what you're really trying to do with your golf swing, especially when you're working on mechanics. I'm going to demonstrate a couple different things here because there's two different ways you need to think about it depending on what your tendencies are as a golfer.

In the original video, when we talk about exactly what we're doing when we're throwing the ball, we're really dealing a lot with hip spinners. Just to give you a really clear picture of that, a hip spinner tends to be a golfer who gets his hips way out in front of his arms and the arms get stuck way back behind here. Hips are wide open. The right heel is always up off the ground. Belt buckle is nearly facing the target. Then they're coming too far from the inside and they try to save the shot at the last second with their hands. It becomes a very inconsistent way to hit the ball.

It tends to be a better player's fault. The more athletic the golfer is, the more they've learned to use their hips for speed and power. They overdo it. That's when we start emphasizing how to use the right arm.

Then what we're really doing is just trying to get you to get your right arm to help work the club in your hands back in front of your body. That doesn't mean your hips stop working. Although if you're a hip spinner, you will tend to feel that they don't work or they stop working as much because you're so used to overusing them that you've trained them really well to get out of the way.

For you, your target is literally right down at the ball that's on the ground. That's what you're trying to do is learn to release the club into the release point at the ball. Not way out here. You're already really good at that. When you get this far out in front of it, you're releasing the club really late. The club is flipping over past impact and you've lost any control over the club, and the path, and the release point. You're really wanting to focus on just throwing the ball down at the ground and slamming on the brakes right here with everything squared up. In reality, you're still going to get your hips open, et cetera, but you need to feel, and you need to do your drills that you're not opening up. You're trying to be dead square and you're throwing the club or the ball at the ball on the ground.

Now, if you're not a hip spinner, this is very important. If you tend to be really squared impact in the real world, and your golf impact position and your address position look the same, you're not using your body enough. For you, the feeling can be a little bit differently. Drilling that you throw the ball down at the ground is great for every golfer because that's going to teach you the release point of the wrists, and the arms, and getting everything squared back up.

If you don't use your body enough, what you want to do is you want to still release the ball down at the same point, but you want to try and get your hips open so that you're in this position, not this position. Because you're not doing it enough in the real swing if you end up looking squared up. You want to try and do the same thing. Get your arm in the position at the top that we talk about in the regular video, and then work your hips open, and then release the ball at the ball, and get your shoulders still squared up, but now you can see that my hips are open.

For some of you, you may even need to feel that your heel comes off the ground. That's because your tendencies are the opposite. We don't want the heel to come up off the ground. Most of the time, you don't need to get your right foot coming up off the ground. That tends to let the hips get a little wild. But if you're one of those people that doesn't use your body enough, you don't get your hips going enough, you just tend to use your all arms from the top, feeling and drilling this throw the ball drill with your hips open at impact is exactly what you need to feel for your golf swing.


JOIN OUR 402,079 MEMBERS AND GET INSTANT FREE ACCESS TO DOZENS OF VIDEOS!