So many golfers try to perfect the takeaway in the swing and they constantly fight an uphill battle because they spend most of their time worrying about swing plane and clubface position. What if I told you to stop looking at the club completely and just focus on a simple 2 inch body movement that I guarantee would solve all of your problems for good? Crazy right? The club will NOT move on it's own...I promise you! In video 6 of 7 in the "Keys to RST" series, I will show you how the physics of pulling will move your club into a perfect takeaway position every single time. No more worrying about the club, let's focus on the way you move your body! 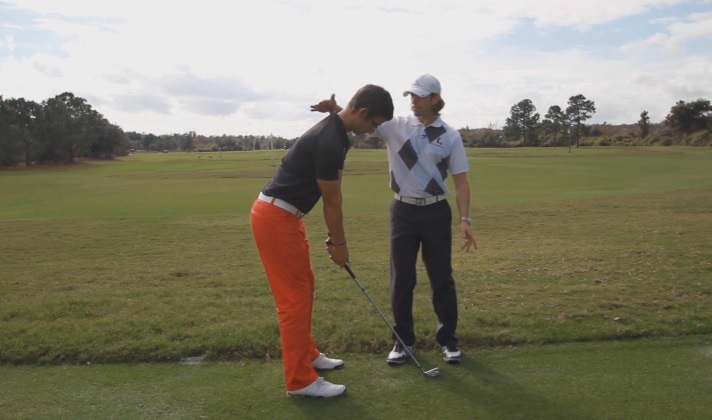 Over the first five videos in the "Keys to RST" series, we discuss how simple physics relate to the movements of the body in the golf swing. We discuss why so many golfers struggle getting into a tour quality impact position, as well as show you how to get more speed for your perfect release.

In this next video, I am going to show you a simple and effective way to perform a perfect takeaway in the golf swing with a simple 2 inch pulling movement. Sounds crazy right?

Most golfers struggle with getting into proper position because their focus is purely on the direction of the club and NOT the movements on the body that caused the club to move in the first place.

Let's stop and think about this for a second...

As creatures of habit, and always being so dependent on one very common term talked about in the golf industry known as "swing plane", our focus is always trying to aim the club into a certain direction/position. Sure, it can look like it has solved your problems of that dreaded inside takeaway or shut club face position but, is it permanent?

Simple way to look at this is...If we move, the club moves.

Let's make it even easier to understand. If you are hanging onto the golf club and you were to pull your trail shoulder blade (also known as shoulder blade glide in the Move 1 - Takeaway video) 2 inches in towards your spine, your shoulders would begin to rotate quite a bit. This would cause the arms to move and thus, the golf club would respond accordingly right into a perfect takeaway position every single time.

The more scientific look at this movement, is to think the rotation of the body you are creating by pulling your shoulder blade in towards your center (spine), as centripetal force, which is best defined as centered rotation moving towards the force of movement. The result of this movement would be centrifugal force. The golf club would be moving out and away from you as a result of this simple movement. Where does it go? The same place every single time.

This is how you become more and more consistent in the golf swing. We all want a golf swing that works the same way each and every time we play right?

So, after looking at the golf swing from physics standpoint and understanding how either a push vs. pulling can strongly affect the way your club moves into the takeaway position, it should be more than clear that your focus not be fixated on the golf club and swing plane, it should be purely focused on the movements of the body. You can train your body to learn new movement patterns through repetition.

We have several premium videos that will walk you through how to a step by step process on how to make your takeaway position perfect each and every time. Check out: Move 1 - The Takeaway and 5 minutes to master your takeaway now.

If you recall in the very first video of this series, I talked about the concept, the physics concept of pushing versus pulling and how all movement is a push or a pull. When it comes to the golf swing, as we've gone through this video series it's a critical concept that you understand pushing versus pulling. That applies right for the first foot that you move the club off the ball. We're going to talk about the takeaway with that. I have my assistant here, Chris. I'm going to have him hold this club against his shoulders. I'm going to have him just stand there without doing anything. I'm going to move him around. I'm going to be his force of movement as we talked about in the first video.

Now when I pull, notice how his head stays really centered and he's not moving around much at all. This concept is critical, because as I pull, I'm beginning to move towards center, towards a fixed point. Now when you push something where does it move? A push can move in any direction away from center. It's always moving away from the force of movement and a pulling motion is moving towards the force of movement. If you remember my little toy truck I had at the very beginning of the first video, that concept is applicable here in the takeaway.

If I get Chris to pull, pull his right shoulder back, and in towards his spine, it's going to get the club to move out away in the right direction and the right spot every single time. Chris, go ahead and get in a set up position here. All I want you to do is focus on taking that right shoulder back and pulling it back as you take the club back.

The club goes into the exact same spot. Thank you. Every single time. This is a critical concept. If you want to stay centered in your takeaway and get the club to go in the same spot every time all you really need to understand is again this concept of pushing versus pulling. I've got a great video on the takeaway. I want you to take a look, that's going to walk you through how to get into these great positions without any effort. You're going to go from moving the club nine feet, you're going to focus on moving two inches in this little video on the takeaway.

Get Your Free Membership to Finish Watching "Pull for a perfect takeaway - 6 of 7" Right Now!

Get Your Free Membership to Finish Watching "Pull for a perfect takeaway - 6 of 7" Right Now!