In part 3 of the "Keys to RST" series, I am going to show you how to increase your clubhead speed instantly with a proper release. In the first 2 videos, I discussed some simple physics and how to work into a tour quality impact position. Now that you have control of the club in the hitting area, it's time to speed things up tremendously. If you want more distance off the tee without having to work so hard, then you need to watch this video now! 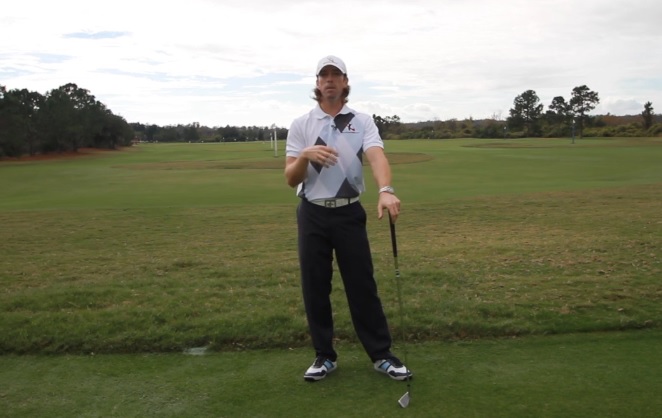 In the first 2 videos of the "Keys to RST" series, I talked about some simple push vs. pull physics and how to get into a tour quality impact position. Now, it is time to speed things up drastically with a proper release of the golf club.

One of the most critical concepts of the release is a term known as "lag". Lag is simply defined as an angle between the shaft of the club and the forearms. This angle is extremely important to clubhead speed and it is considered potential energy for the release of the club. Note: this angle can be a double edged sword unless you know how to get rid of it properly. Check out a great video called "Re-shaping your swing for lag". This video will show you a step by step process to build a proper angle for lag and set you up for a perfect release in the hitting area.

Back to the release! What is it? Well, the definition of release is to let go. This is the big pay off in the golf swing and can attribute to 60% of your clubhead speed. That's right, over 2/3 of your clubhead speed is gained 3 feet prior to impact. However, in order to set yourself up for mind blowing speed, you must have lag in your downswing.

Now that we have a clear understanding of just how important lag (potential energy) and the release are to the swing. Why do amateur golfers struggle so much with getting speed or proper impact? The biggest issue that is seen among all amateur golfers is that they start to throw the club right from the top of the swing. This is generally caused by your dominant hand/arm and maybe a bit of your less dominant thumb. The trail arm and the lead thumb are in the only position that is behind the club and can attribute to the club being pushed or thrown out away from you. This can rob you of precious speed in the hitting area, cause you to flip or scoop the shot and even get you into that dreaded chicken wing position.

How do you correct it? Plain and simple, do less with your hands and arms from the top of the swing down. Allow the lower body movements in transition to pull your hands down into the hitting area and you will have all kinds or stored potential energy and be ready to release the club for maximum speed at impact. Right where it counts the most. Check out a great drill to help you pull your arms down with the lower body called "Squat to Square".

After you have masterd the downswing sequence and you have stopped throwing the club from the top of the swing, check out one of the most important videos on RotarySwing.com known as "5 minutes to a perfect release" this video will walk you through a step by step process on how to train a tour style release and get you tons of speed. Once you have mastered that, check out the "Vijay release drill" and get 20, 30 or even 40 yards added instantly off the tee.

I'm Chuck Quinton, founder of RotarySwing Golf. In the previous two videos I talked a lot about the physics of the impact position and release, and how it impacts how you get into a great tour quality impact position. In this video, I'm going to talk a little bit more about the release and it's importance.

One of the things that's critical in the golf swing that we all know about and want, typically most amateurs want more of and better players want to get rid of, is this concept of lag. The lag is, again, to redefine it, just the angle between the forearms and the shaft, whether you define it between a left arm and right arm, it's not important for our discussion point for now, but this angle is potential energy, as I discuss in the first video, but that potential energy is useless if you don't release it. So in other words, if you have this great angle and you hold it all the way down to impact and you hit the ball like this, well you haven't released it and it doesn't give you any more speed.

This is critical because the release of this lagging or the release of the angle from your wrists accounts for over 60% of your club head speed. Over 2/3 of your speed comes from just from the release of your wrists. So to have this lag angle, to have this potential energy and then properly release it, is the essence of the golf swing. It is the most important part of the swing. Most amateurs struggle because they release it incorrectly and start doing it too soon, and as they do that, they get into this position because they're pushing from the right side. If you watched the first two videos, you'll understand what that means, and as they're doing that the lag angle's getting thrown away and they get into this scoopy, chicken wing impact position.

To understand how to release the club, you've got to understand what the word release really means. Think about that for a second. You hear this term on TV all the time or for golf instructors or other golfers, "Aww, I didn't release the club." What does that mean, literally, to release something? Well, it means to let go. If you really release something, that's when you let it go and that's when it's going to accelerate the most. The trick is how you release the club and the golf swing is everything. So when we talk about that, we're talking about getting rid of this angle and letting the forms and club face rotate over. You can see the club can move very fast without my body doing much of anything. That's giving me a lot of speed just because I'm properly releasing the club without having to do much with my body.

Now to do that correctly, I want you to think about how'd you swing a hammer. If you were to use a hammer and we're going to use either hand for now, this angle that you create is what gives you the potential energy to get a lot of speed into that nail without a lot of effort. You don't heave your body into it, and hack at it with your arm, you get the majority of your speed from the release of your wrists. Think about that. If you're holding onto a hammer really tight, and your wrist is really tight, you can't get a lot of speed out of it because your wrist can't move very fast compared to keeping your wrist soft and letting it release with a lot of speed.


JOIN OUR 401,399 MEMBERS AND GET INSTANT FREE ACCESS TO DOZENS OF VIDEOS!

Take advantage of the RST System and do the drills INDOORS!

You'll improve faster than trying to do things out on the range or on the course, NOW is the time to work on your golf swing!

Let us help you transform your game for 2017 and sign up for an annual membership at our 2009 prices!

To take advantage of this offer, simply click the button below: