You need to start your downswing before completing your backswing. This pro-style transition is a key for consistency and distance. The drill in this video increased my club head speed from 113 mph to as high as 127 mph, all in about 10 minutes! 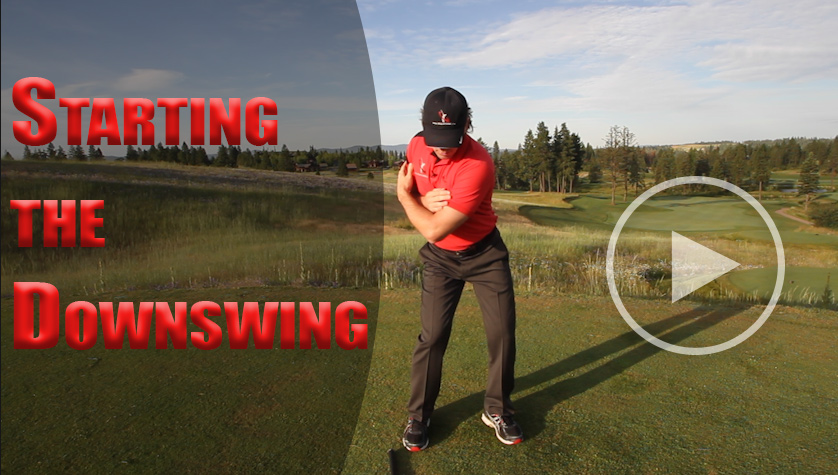 When it comes to having a powerful and efficient golf swing, it's really important that we start dynamically loading these muscle fibers that we're recruiting, to build club-ed speed. When we look at the down swing, and really the transition of the golf swing, when the club is transitioning from going this way, going back, to going this way, coming down, really what we're trying to do is, start moving back toward the target, before the club finishes the back swing. It's because of this dynamic timing of the swing, and it's something that most amateur golfers never, ever feel right, and they try to manipulate and create this goofy movement where like, "Okay, I know I'm supposed to start the down swing before my club finishes going back." So, they kind of do this kind of stuff, and try to time it incorrectly. You can't manipulate that kind of stuff, it's not going to work very well.

What I want you to do is have a better visual picture in your head of what this movement is, before we get into the specifics of how we're going to do it in the golf swing. Think about it this way, if you were going to throw a ball, you'd be really good at this already, you've done this before, to whereas you started going back, you're shifting your weight, your arm's starting to glide back, and then as you start to shift forward, notice that as I'm doing this I'm taking that step, what's my arm doing? It's actually loading this way. You instinctively know how to do this if you've ever thrown anything.

What you're doing is, you're stretching these muscles using the stretch shortening cycle, to load these muscles more powerfully, dynamically by getting them to stretch further, which is what we want to do in the golf swing. As I start to step forward, that's when my arm's actually going back, so as I'm doing this, now my chest is really stretched, and as I start to wind forward, it's got this extra stretch in it, that's going to produce a lot of speed, but it's free speed, it is effortless speed, because all I'm doing is taking advantage of the stretch shortening cycle where the muscle fiber stretches and then it wants to spring back into position. You want to take advantage of that, because your body does this for you, it's in your DNA, that when you stretch a muscle really quickly, all of a sudden it wants to spring back really quickly.

Another way of thinking about this is, jumping. If you were going to jump up and touch something as high as you could, you wouldn't go down, stop, hang out here for a second, chill out, think about it, and then try to jump up there. How would you jump? You'd go down dynamically and spring back up, you'd do it very quickly. The same is true in the swing, you're taking advantage of the stretch shortening cycle in your muscles, and you need to do that in the golf swing. The problem is, in the golf swing, instead of focusing on moving our core, which is where this stretch shortening session needs to happen, so many golfers focus on moving just from their arms and hands, and they never get this movement right.

I'm going to set the club down, I'm going to focus on doing it without the club, and start moving my body correctly. Now, as I'm moving back this way, I'm focusing really, not on the club, but on my torso rotation, as my torso's turning this way, my body's going to start shifting the weight back the other way. As I'm doing this, I'm getting that little extra load, and my core, my obliques, that's where we want this to happen, and so, but what you see visually, is the club. Because this movement isn't really that big, it's a small little stretch but it really helps speed up the rotation, which helps speed up the club, but because it's such a small movement, you notice more of what's happening with the club.

In a better player's swing, the club's going back, back, back, back, but what's really happening, is it's all happening from down here. That's what's making the club change directions and make the swing get narrower coming down. So if you looked at my widener or wide swing video, you know that we're going to be wide going back, and narrow coming down, and this movement is created dynamically by my trunk, not by me going back with my arms, and then trying to change directions with my arms and hands.

My hands and arms direction gets changed by this movement of my trunk. So, as I've got the club going back, my movement while I'm still turning going back, I'm going to start shifting coming down, and that's what allows you to create this dynamic stretch in your body, and create a tremendous amount of speed with no effort at all, because as these muscles get stretched, the first thing they want to do, is snap back, and that's going to speed up everything coming down. Again, learn everything in the golf swing and in Rotary Swing, from the inside out. It's much easier and much faster.


JOIN OUR 396,367 MEMBERS AND GET INSTANT FREE ACCESS TO DOZENS OF VIDEOS!