Eliminate your reverse pivot, handsy inside takeaway, your head swaying off the ball and your overswing with one simple feeling 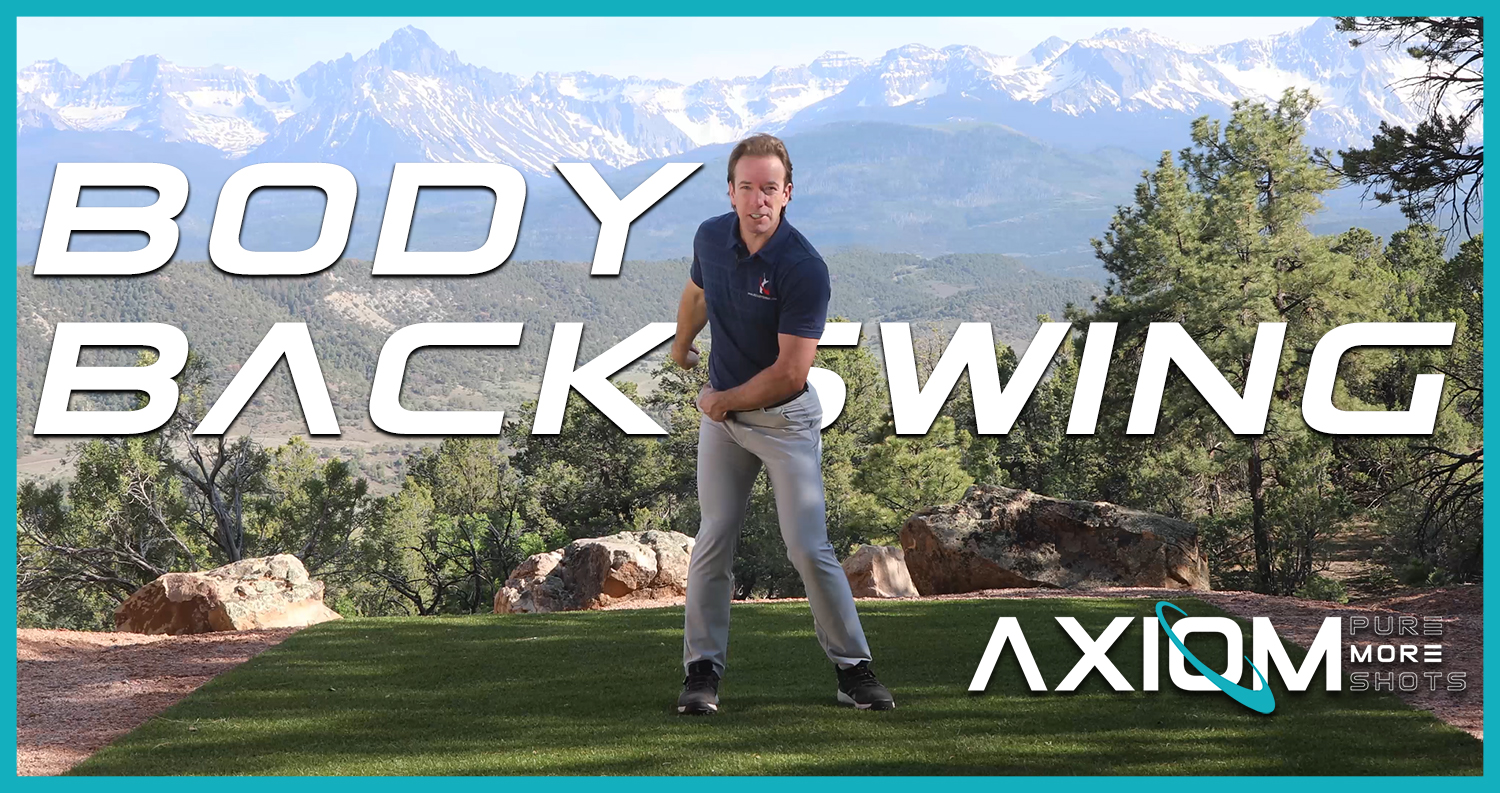 Once you feel the Axiom for the first time, it becomes clear just how simple and fluid your backswing can be. Rather than trying to group together a bunch of positions and figure out how they all go together. You have one fluid collective movement that makes it feel natural and athletic, but positions have a place. You have to understand what those positions are and where they happen in the swing so that you can double check. When things start to go off and with the Axiom backswing, there are only three simple checkpoints that you need to know. The first and most important checkpoint is your head. If your head's moving all over the place in the backswing, whether it's moving away from the target or toward the target golf is going to be really, really hard. So to make it simple. And especially when it comes to striking those irons, very crisp, tight lies on the turf.

You really need to stay relatively, quite centered. Now here, a little bit of lateral movement is okay, but once you get over much over an inch of movement, you start adding a lot of variability to the swing. So how do you keep your head really centered with rotary swing? It's really simple. All you need to do is take your trail shoulder and pull it behind your head piece of cake. I can make a big turn in my head, even though my neck is fused, my head is barely moved at all. When people start moving laterally off the ball, it tends to happen because they're pushing from the lead side of their body. Now, I talk more about pushing versus pulling in the fundamental section and a bit, if your head is still moving off the ball, take a look at the faults and fixes or get a quick swing review because this movement is really, really simple.

And our coaches are trained to help you figure this out very, very quickly. What's causing you to move off the ball once you've got your head staying nice and center during the backswing, the next checkpoint is making sure your pressure is moving toward the heel of your trail foot. So in my case, I'm a right-handed golfer. My trail leg is my right leg during the backswing. I want my pressure to move towards six o'clock. Remember what the accident. We have a clock on the ground, 12 o'clock three o'clock, six o'clock. And as I'm moving my pressure in this clockwise direction for a right-handed golfer, it's counterclockwise for lefty, but as most of us are right-handed, I'm going to just refer to this as a clockwise movement. As my pressure moves back to six o'clock my hip goes deeper. You'll see this in the downswing section.

When I look at some of the tour pros like Dustin Johnson, his hip gets really deep during the backswing, but for right now, all you need to feel is that little clockwise pressure shift to make sure your pressure is back on the heel. And when we come to the downswing section, next it'll all flow really, really nicely. But if you'd make a backswing mistake like many amateurs do and move on to the ball of your foot during the backswing, you're off balance right away, you're not able to load up and use your hips. And you're going to have a very weak and very little power in your golf swing. The last thing to check is your trail hip in the back, swing the hip from Bude from face-on. If you're looking at yourself in the mirror, this hip should look like it doesn't move laterally away from the target or toward the target.

It should appear that it stays exactly where it was at address. Again, we'll look at this with some of the tour pro samples, but what you really want to feel is that as your pressure's going back, you're neither sliding your hips laterally or toward the target, which is a reverse hip shift. So all you really want to feel is that this hip stays nice and stable in the false and fixed section. We've got some drills to help you with that. If you have a tendency to make one of those mistakes, but as far as the whole backspin goes, that's it, your right shoulder or your trail shoulder goes back. Your pressure goes back onto your heel and your right hip trail, hip stays right where it started. If you can nail those three checkpoints, you've got the makings of a super consistent backswing and it's super, super simple. Now let's take a look at some of the tour pros so we can see how the best players in the world do these exact same three movements. Just like you saw.

Let's take a look at Dustin Johnson from both face on and down the line. So let's focus on face on first and I've drawn a line on his right hip and the left side of his head. You'll see, as he goes back, his right hip stays pretty much right where it started out all the way to the top of the swing. And if you look at his head, the left side of his head is right about on that line, where he started. If we look at down the line, you'll see that his hip moves much, much deeper, and you can see the, the line I've drawn on the bottom of his leg. Watch how his leg moves much straighter the lower part of his leg to move that pressure deep into the heel. And now you can see just how much deeper his hip is from where it started at address.

Now let's take a look at tiger woods from an unusual angle, up above as a bird's eye view and see the same things in action. So you can see the line I've drawn on the left side of his head. Tiger does an incredible job, keeping his head perfectly centered throughout the swing, but also notice the line I've drawn on his hips. Watch us. He goes back at that trail hip, his right hip gets deeper. Then we'll talk more about the downswing. You'll see even his left hip, get deeper than where it started. Most amateur golfers make the mistake of their hips actually going this way during the backswing. Then you can see the best players in the world, do everything to prevent that they need to get deeper into those hips. And that's what that clockwise pressure shift helps you do right off the ball.

Look at tiger, but looking at it from the conventional face on and down the line angles, and you'll see the same things happen. If you look at his right hip first, you're going to see that right. Hip sting would appears perfectly still throughout the whole backseat, but of course, it's moving deeper. If we look at the down the line view, you can see his right hip starting to cross over that yellow line. And his head has stayed right about where it started. These three checkpoints are all you need to work on to get your body dialed in, to have a very simple, consistent, repeatable backswing.


JOIN OUR 402,079 MEMBERS AND GET INSTANT FREE ACCESS TO DOZENS OF VIDEOS!