So many golfers struggle with their ball striking because they misunderstand the concept Ben Hogan made famous - swing plane. There are two basic ways to create a swing plane and one is correct and the other is not. 90% of golfers do it the wrong way. Swing plane is a by product of three basic body movements that you will see in this video that create an ideal swing plane without you ever giving it a thought. Study this video closely and you will finally understand how to properly create a PGA Tour caliber swing plane. 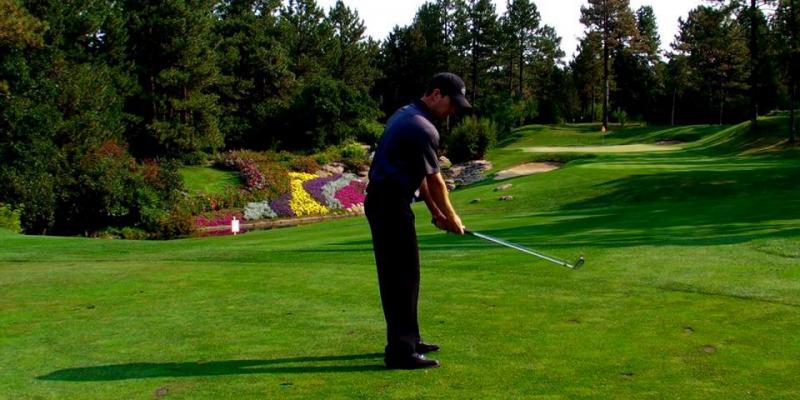 Many golfers are confused about the term golf swing plane. It's used a lot. Ben Hogan is credited with the first to ever coin the term swing plane, in the terms of golf instruction. But a golf swing plane is vastly misunderstood, more importantly on how to create a correct swing plane, and what is the importance of swing plane and what are you trying to do with it. What we're going to talk about in this video is how a swing plane is actually properly created. It's very very simple, and it's nothing like what you think it is.

For most people, when they think about creating a golf swing plane, it's primarily the left arm. They're taking that left arm and swinging it on an arc. There's no doubt that this creates a swing plane. In fact, it's a very good swing plane, just using my left arm. The problem is, it's unnecessary movement, because all of my movement right now as you'll watch from face on is coming from my left shoulder joint. My left shoulder socket. That's how I'm creating this movable plane here. It's much simpler to create a proper golf swing plane.

So first thing's first. I'm going to take my golf setup position, and I'm just going to do rotation. Remember that's the first thing I mentioned that creates a plane. As I'm setup at a dress, is I start to rotate with no shoulder elevation or right elbow flexion, just rotation. The club is working on a plane. Granted, it's a very shallow one. The club's not getting up in a good position. But it is in fact swinging on a little plane just due to me rotating.

That creates a small amount of the golf swing plane that we're trying to achieve in the golf swing. Now, without doing anything with my left arm whatsoever, I'm going to use my right arm going back and add rotation onto that. I'll break it up into two pieces at first. This is all I'm going to be doing. Shoulder elevation, right elbow flexion. You can see the club's moving in a vertical space at this point. Now, to get into my posture, I'm going to keep doing that, and I'm going to add rotation, which we saw created a shallow plane. That created depth. The right arm movement creates vertical movement. Now, let's put them together. I'm going to do this with this at the same time.

Do you see how that creates a correct swing plane? I'm not trying to create a plane. In fact, I'm doing two almost opposite movements. I'm rotating in one direction and bringing my right arm, folding my right arm straight up in the other direction. But when you combine these two pieces together around and up, you in fact create a proper swing plane without trying to. It's that simple. Right elbow flexion, a little bit of shoulder elevation, pulling my right shoulder blade back. It's not that I can't create this same motion with my left arm. I can. With a little bit of training, you can get any golfer. I'm still rotating. Now I'm swinging my left arm up.

Here's the catch. With the left arm, what we call the left arm push. When you start to get left side dominant to create that golf swing plane, you're pushing, which is typically going to cause your head to move off the ball, but more importantly, it's going to almost, without fail, force the right arm back and away behind the body because that left arm swinging creates a lot of momentum, the right elbow can't fight that, and so it gets stuck back here behind your body.

When we get to the top of the golf backswing, and we see a lot of amateur golfers with their right arm buried back behind their body, and they get stuck coming down, or they come over the top, it's almost always because they're trying to create a swing plane with that left arm. When instead, we get them to focus on the back side, their right side going back, the pulling side during the backswing, and they start to focus on keeping that right arm in position, getting that right elbow flexion and rotation, their swing plane and their position at the top instead of being buried, is perfect.

When you put both hands on the club, it's still the same thing. I'm focusing on right side. My left side's barely even doing anything. So when you think about terms of swing plane, golf swing plane is not you trying to swing your left arm all around your body. That's going to push your arms and hands deep behind your chest, and you're going to get the club stuck back behind you.

Understand that you're doing rotation with the right elbow flexion, which creates probably 80% of the vertical movement in the actual creation of the swing plane is that elbow flexion, and you've simplified your swing dramatically because if you try to do it with the left side, you've got your left side pushing across your body, elevating, rotating, all these pieces that are hard to learn, especially for an amateur golfer who doesn't have a lot of time. In fact again, it's over complicating a move that's really simple. Right elbow flexion, rotation, and you'll have a great golf swing plane.

Get Your Free Membership to Finish Watching "Creating a Swing Plane" Right Now!

Get Your Free Membership to Finish Watching "Creating a Swing Plane" Right Now!