Fix Hip Overturning in Your Backswing

Fix Hip Overturning in Your Backswing

If you're letting your hips over rotate in the backswing, you're costing yourself a ton of power and control. Learn why and how to fix it. 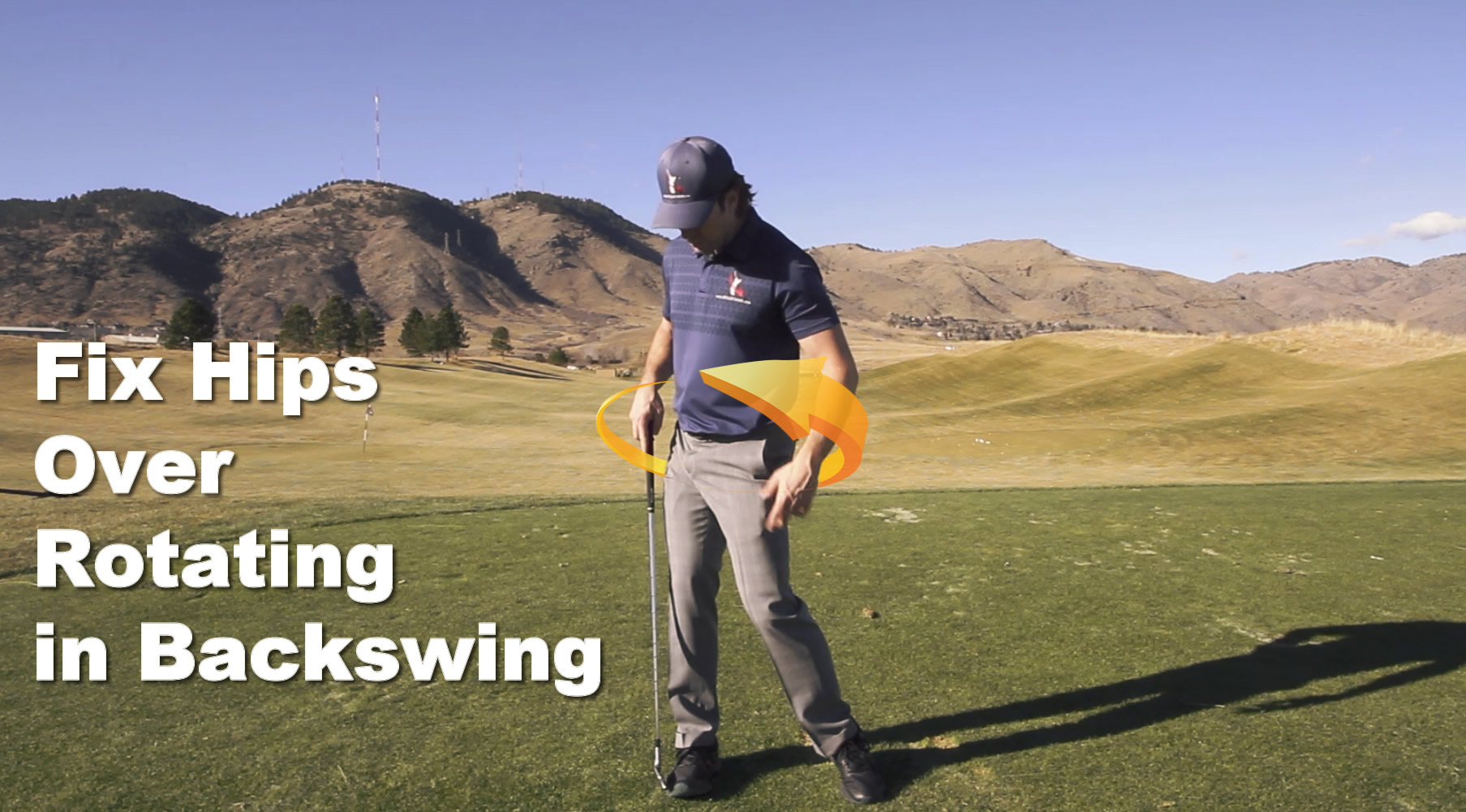 Many amateur golfers struggle with their hips over rotating in the back swing. And they have no idea why they're doing it. And they have no reason to stop because they don't know what damage is causing in their swing. So I wanna talk about both of those today because the hips overturning and the swing is something you absolutely must stop to build power and consistency in your golf swing. So let's first look at what causes your hips overturn. Let's take a look at what it looks like when your hips overturned. So the biggest thing that you're going to notice obviously is that you look at their belt buckle. The hips are going to turn 56 degrees. A lot of times, if you let your left heel come up, you're going to see a bigger hip term because this obviously frees up your hips to rotate more.

If you really do it bad, you'll end up on the outside of your right foot at the top of your swing. This happens when you try to kind of lift your arms up. So now my I'm in a doesn't exactly look the most powerful position in the world, as you can imagine. And now not only am I in a weak position and haven't loaded up my muscles because my core and my hips have turned the same amount. So I haven't stretched any of these vital core muscles that are essential for power in the swing. I've just moved them together because this is what I call the lazy man's way to make a backswing. Cause this doesn't take any effort. You just pivoting on your hip, rolling around. I have not loaded any of these muscles to do this correctly, to keep your hips anchored and start rotating and stretching here.

This actually takes work. You're compressing your rib cage. You're using all these core muscles to turn and twist your body. And you're going to recruit a lot more muscle fiber, which at the end of the day, so the whole purpose of the golf swing, you must load your torso and create this torque because this is going to allow you to easily expend energy on the way down automatically as you stretch these muscles, they naturally, when returned back to the normal position, that's free power. That's built into your DNA. It's the same for all of us. So we need to stretch and load these muscles. And that's why you don't want your hips to over-rotate in the backswing. So how do we stop it? The first thing I always check is the right knee, the right knee. You've noticed we had a, a video on a site called the laser beam drill.

And if you imagine a laser coming out of the back of my knee, I want to imagine that it's kind of pointing at the ball and that doesn't necessarily have to be canted in that much. But what we see a lot of times is people set up like this, where their knee, their laser be pointing outside their foot. And then you're just one step away from a huge over hip turn here. So as you keep your right knee rotated in slightly pointed to the inside of your foot, or imagine that it's pointing at the ball and you try and keep it there the whole time as you go back. Well, how far can my hips turn? Not very far. In fact, I turned the right amount and I feel way more load in my glutes and my hips and my core now than I do when I do this, this just feels pathetic and weak.

So as I keep that knee focusing on that right knee, laser beam drill anchored in now my hips can't overturn. That's the key to keeping those hips from rotate. Now, I feel my glutes. The whole point of this again, is to create torque and muscle fiber recruitment, which is the name of the game and the golf swing for effortless power. The more muscle fiber we can recruit, the more power we can generate with less effort. So instead of letting your hips go out and your knees go out and your weight go to your outside of your foot, and you're making this huge hip turning out, loading this, you need to feel that this is moving independently of this. As soon as you do that, your hips will stop over. Rotating, get used to feeling load in your right glute instead of just twisting on it on your hip socket and your hips will stop overturning.

And the big thing is there'll be way less work for you to do in the downswing to get everything back into an impact position. Think about it this way. If I turn my hips 45 degrees going back and you know, they're going to be about 45 degrees, open it impact. How far do I have to turn my hips in that quarter of a second, that it takes for the entire downswing to complete? Well, obviously 45 and 45 is 90 degrees, 45 degrees closed in relationship to the target square 45 open that's 90 degrees of rotation. Now let's say you're like a net, typical amateur golfer who just gets lazy and just lets their hip kind of rotate like this, no load, no torque here. And now I've turned my hip 65 degrees. Well now in that same quarter of a second, this is going to take me to complete the downswing. How far do I have to turn my hips? Well, now instead of 90 degrees, you got to add another

Amount of time. That's twice as much effort to get my hips all the way open. And guess what? You're going to start doing. Start trying to push off my right side, use my shoulders. Anything I can to try and get into that proper impact position, or I just won't even achieve that proper impact position. Cause I couldn't turn my hips fast enough cause I didn't load up the right muscles that help them turn. So this hip overturn not only makes your swing more work to try and get your hips open properly there, it actually costs you more power because you're recruiting less muscle. It's a double whammy. Not only are you going to be more inconsistent because your hips are having to turn more in a super short compressed period of time, but they have to turn more without any muscle power. There's no muscle recruitment in your core and your trunk here when you just lazy, let everything turn back together and now on all, if I'm more inconsistent and have less power, well that's kind of defines amateur golf right there. Doesn't it. So you want more power? You want more consistency? We need to move less and recruit more muscle fiber at the same time. Not letting your hips overturned by using that right knee. Laser beam drill will keep you in a great position at the top of your backswing.

Get Your Free Membership to Finish Watching "Fix Hip Overturning in Your Backswing" Right Now!

Get Your Free Membership to Finish Watching "Fix Hip Overturning in Your Backswing" Right Now! 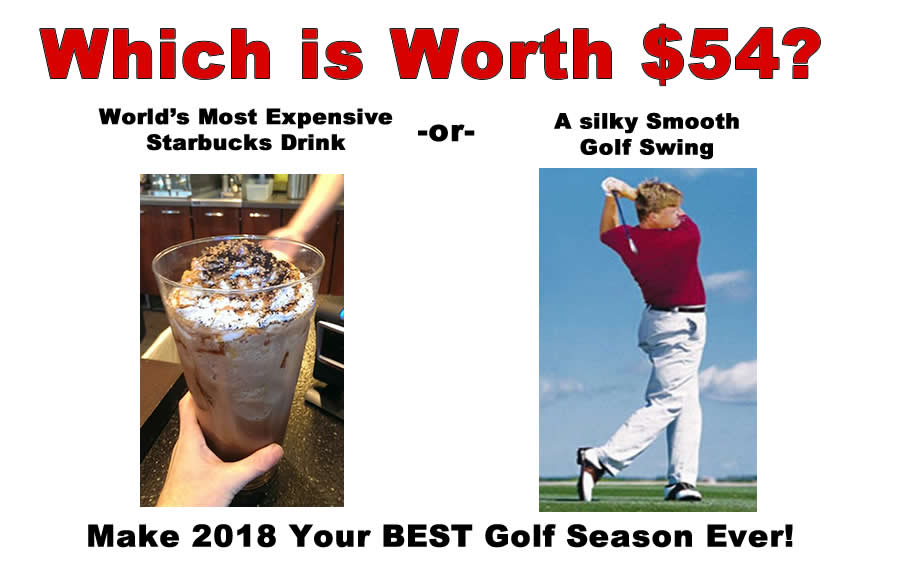