It's graduation day! If you've got your 3 core body movements down pat and the lead arm and club, adding the right arm and ball will be the last thing to do to achieve the golf swing of your dreams! 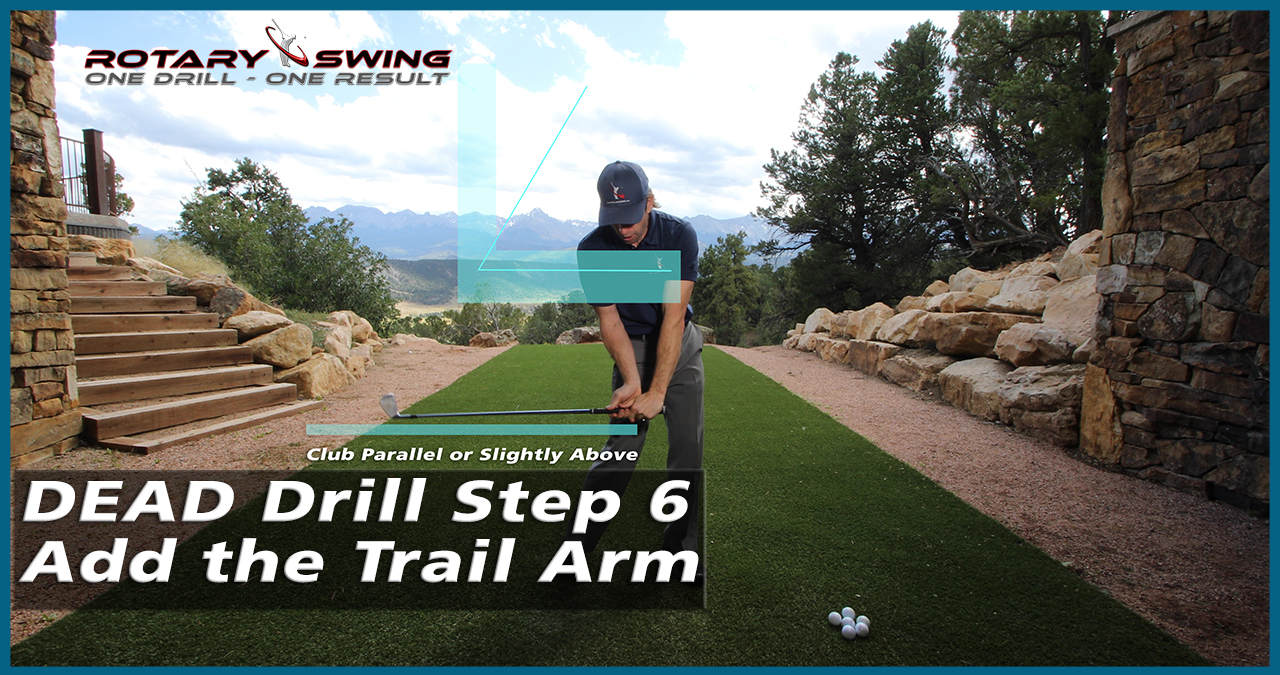 All right guys, it's graduation day. We're finally going to add the trail arm and the ball into the mix. And we're going to do this in a very specific sequence. So you don't start overtaking everything with the dominant arm that is so common for most

Golfers. So what you want to do first

Is focus on getting your lead arm to do all the work for you in the swing with your body while hitting balls. Now, first is going to be a challenge. So don't try to hit the balls. Hard. All you're going to do is let the ball get collected by the club, because remember your body is what's doing all of the work. So if we go back to our simple move that we did before, can we just do this little release, move clubs coming down, perfectly square on playing on path, but you don't want to go all the way to the top at speed like that just yet, because you've got to get used to that little white demon being in the way I highly recommend. If you're, especially, if you're doing this at home, use little foam balls at first, it helps you get over the mental hurdle of hitting something hard, like the golf ball, while still focusing on checking your checkpoints and your body movement in the club.

So what I'm going to do at first is I'm just going to go to the top, do my transition and post up and stop. And then just let the club release. This is just a little baby check swing. So it's just a matter of making sure that I'm getting everything to release properly throughout the whole swing, as I'm doing that. And I feel comfortable hitting balls like that and hitting just little short, you know, 15, 20 yard shots. I'm going to start making this a little bit bigger, but remember, without the trailing arm on there, there's no point

We need this arm to help transfer energy from our trunk. So there's no point in going up here and trying to hit balls like this with your lead arm only, it's not going to work out. We need that arm in there for support. So when you're doing this, don't really swing very fast. This has to be about as fast as you'd ever want to go lead arm. Only as you're putting it all together in one motion. [inaudible]

Any harder than that. There's no real point to it. So as we get comfortable with this, and again, even that you don't really need to even hit them that hard. It's not the point of the swing. The point is to get the body movement, to hit the checkpoints and let the club collect the ball on the ball, get in the way. But once we're ready to put all of this stuff together, it's time to add this tricky guy back in. How do we do this at first, at first, you want to do that without a ball. I want you to get comfortable hitting balls. Left-hand only, but again, just little baby shots, no point in going full speed. Once you've gotten comfortable where you can hit and let the ball just get collected by the club and your body movements. What we're going to do next is add the right arm at the top of the swing.

So go to the top, make your body movement. And now you'll notice that you've been doing this drill and the club feels kind of heavy. That's good because that's the right hands job is to help bring this up and support the club. Now, from here, everything else exactly the same squat to square post up my right hand is just there helping support the club. I'm not trying to do anything with it yet. The right arm's job is primarily supporting the left arm. And that's why it's really a good thing to go to the top and bring it on there so that you don't start doing anything with your right arm that messes up your body movements. You've been working on top, bring it up shift and post and release. Now there's many videos on the reference videos that we'll talk about how to get the club to release the five minutes to perfect release video talks about how to get that right arm in there.

So I won't cover that in detail here, but the same movements, all the drills on the release apply to this. So if you want to go to the top and just put your fingers on it, fingertips, because you're a little aggressive and you want to start casting the club. And now all of a sudden you're losing lag. If you go to the top and now halfway down, you look like this. Well, what does that mean? It's all right. Arms stuff. So make certain just like before the checkpoints all look exactly the same, nothing changes. Once you add that right arm on there, you're hitting your hip line. You're neutral joint alignment, your right hip line, going back. All of those things are exactly the same as you start adding, going to hit balls with it. Now, though, that's when we're going to start making sure that we're hitting that release point where my shoulders are staying square.

And it's just my arms releasing through the hitting area. As I do this, the right arm is mostly along for the ride. Your right arm is going to do way more than you think, because it's just been trained to do so. So you're going to feel that it doesn't do much at all. As long as you're swinging freely using your body movement, hitting your checkpoints, you'll be shocked at how far you hit the ball. When you feel like your right arm, didn't do anything at all. As you go to add the right arm into it. It's a really good idea to work through some of those release drill videos where you're letting the right hand come off. So let's put this all together and I'll actually start with my right hand on the club at address and go all the way to the top.

So there I let my right hand come off. The club released, pulled my body around to a follow-through hit a great shot. Didn't need my right arm on there. As you get comfortable with this, you're going to start keeping that right arm on there longer and longer and longer. So still taking a light grip with my right hand at address. As I go to the top, I'm just focusing on my body movements there. I let the right hand stay on all the way to the full fall through, but it was barely on. It was a little bit loose and that's a good thing. That's helping me feel the club naturally release without me interfering with it. I'm not trying to push it through. If you find all of a sudden that you start taking deep divots, which you haven't been doing, if you've been using your left arm only properly, you're being way too aggressive with the right hand. So slowly introduce the right hand, go to the top, put it on their fingertips. Only come down, check points and release. Let the hand come off. That's the fastest way to start reintroducing this. Once you get to the point that you can keep that right hand on there very lightly throughout the whole swing, the golf swing of your dreams

Is yours. All you need to do is keep making

Sure you check your body checkpoints and that nothing changes throughout the whole swing. Once you add the club and the right arm on there, and everything is going to fall into place for you,

And you're going to have the swing that you've always been dreaming of.


JOIN OUR 402,222 MEMBERS AND GET INSTANT FREE ACCESS TO DOZENS OF VIDEOS!