The Post Up move is where all the magic happens in the golf downswing. If you've never released the club properly, you're likely not posting up properly. 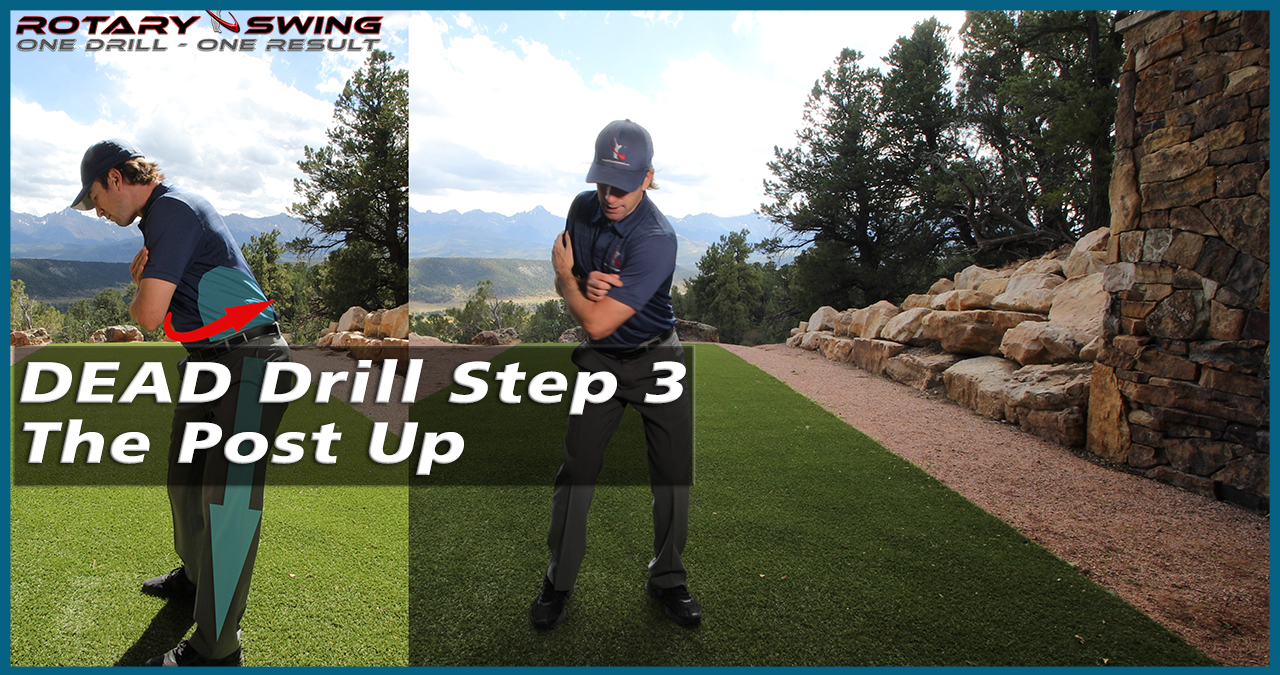 The final core movement of the dead drill is the post-up move. And this is where all the magic happens. If you've done everything correct in the backswing and transition, the up move is so simple and so subtle. You'll wonder how you did it wrong all these years. So as we start going back, we've done our squat. We've done our backswing. We're squatting the square. We know we're at least 50, 50, or more on the lead side. You can go up to about 65 or even 70% during the squat to square, move in the transition and whatever you have left. If you've won 50%, you now need to finish and get 90% on to that lead side for the post up move. That's why some golfers like to focus on making sure that during the transition, they get a little bit more on the lead side.

There is no magic formula for this. The key is that at some point before, in fact, you need to have at least 80 to 90, the percent of your weight back on that lead side, on the left foot at impact, before we get to impact, that's critical. So right shoulder back transition, and I'm, as I'm transitioning, I'm going to keep shifting weight over to the lead side, getting my left hip into neutral joint alignment. As you remember, if you just draw a straight line down from your hip socket, it should go straight to the center of your knee, straight through the center of your ankle. You should never move past neutral joint alignment. If you did, you're pushing way too hard off the right leg, and it's going to really hurt your back and your hip. So remember you can, the way that you use your right leg and the transition is counter steering, counter torque here, not just driving laterally, that's going to hurt your hip and back.

So I'm transitioning. Now notice that my shoulder left shoulder is still lower than my right. My head still is right where it started. And as I keep shifting my hips to the left, getting that left hip in a neutral. Now, all I need to do is push that foot into the ground to help open up my hips while using my obliques to help pull my hips open. And I'll show you this from several different angles so that you can see what it looks like. And again, the biggest mistake is going to be getting shoulders turned through the hitting area. Your shoulders get turned during the down swing by your hips and core and legs. So as you're starting back, remember, keep your shoulders pointed at the top or behind the back behind you. Shifting over to the left, keep shifting as you straighten that leg.

It's very important that you get that leg straight. You're not snapping it straight or hyperextending. It imagine that it's the same amount of straightness that you would have standing here talking to somebody it's not locked out and you're not trying to snap it there. You're just gradually driving force into that ground to straighten it in that neutral joint alignment position. Your key checkpoint here apart from making sure that that leg is straight. You can't have it. That address. You won't get a powerful release, but once it's straight in your hips in neutral joint alignment and your hips are about 30 to 40 degrees, open up to 45 degrees open. You want to make sure that your shoulders are still dead square to the target. Your chest should never ever be open while you're doing this drill. That means you moved them and that's going to cause all kinds of issues in your swing.

So remember your shoulders are getting moved by your hips. Now you can see that my shoulders, because I don't have a club in my hands. My shoulders are pretty close to level. You don't need this deep shoulder tilt. That's also going to cause all kinds of issues in your swing, plane, and path, and possibly injure your back. So make sure as you start down, your left shoulder stays lower than your right, just because you're not moving it. If your left shoulder starts doing stuff like this, or your chest ends up open to the target, you moved them. That's as simple as it gets. Don't move your shoulders, move your lower body. Post-up left hip and neutral shoulder square, right? Heel down. That's important if you're pushing too hard off the right leg, your right foot is going to come up in the air. Again, you're going to change all the angles in your swing.

So now let's look at it from down the line. As I turned back, my chest is pointing at you. And now as I squat to square left shoulder lower than the right, I'm going to now keep shifting to the left, straighten that leg. As I pushed my hip up and back, because remember, you're always trying to move your body in the opposite direction. The club's going. So the club during the downswing is going down because that's where the ball is and out cause the balls out away from you, which means your hips should be moving up and back. And that's what you're doing with your legs and your core to shift and move your hips out of the way. Notice the right heel is still down, but it will tend to roll slightly to the inside. And the outside of my shoe will lift up, but my heel will still be on the ground left shoulder lower than the right, because I'm not moving my shoulders at all.

My legs are doing all the work. My core is doing all the work and that brings me back to a square position where my shoulders and feet are parallel with the target line. The up move is really, really simple and it may, it's made way easier. If you do everything in the back, swing hit all your checkpoints in the back, swing and transition. Then the post-it move is just shifting a little bit further to the left and posting up straightening that leg to open up the hip. You do that. Then once we add the arms and club in, you're going to have more power and more consistency than you ever dreamed because the dead drill makes everything that's simple.


JOIN OUR 402,126 MEMBERS AND GET INSTANT FREE ACCESS TO DOZENS OF VIDEOS!