The DEAD Drill transition is DEAD simple. One move to have a powerful and dynamic transition in your golf swing. 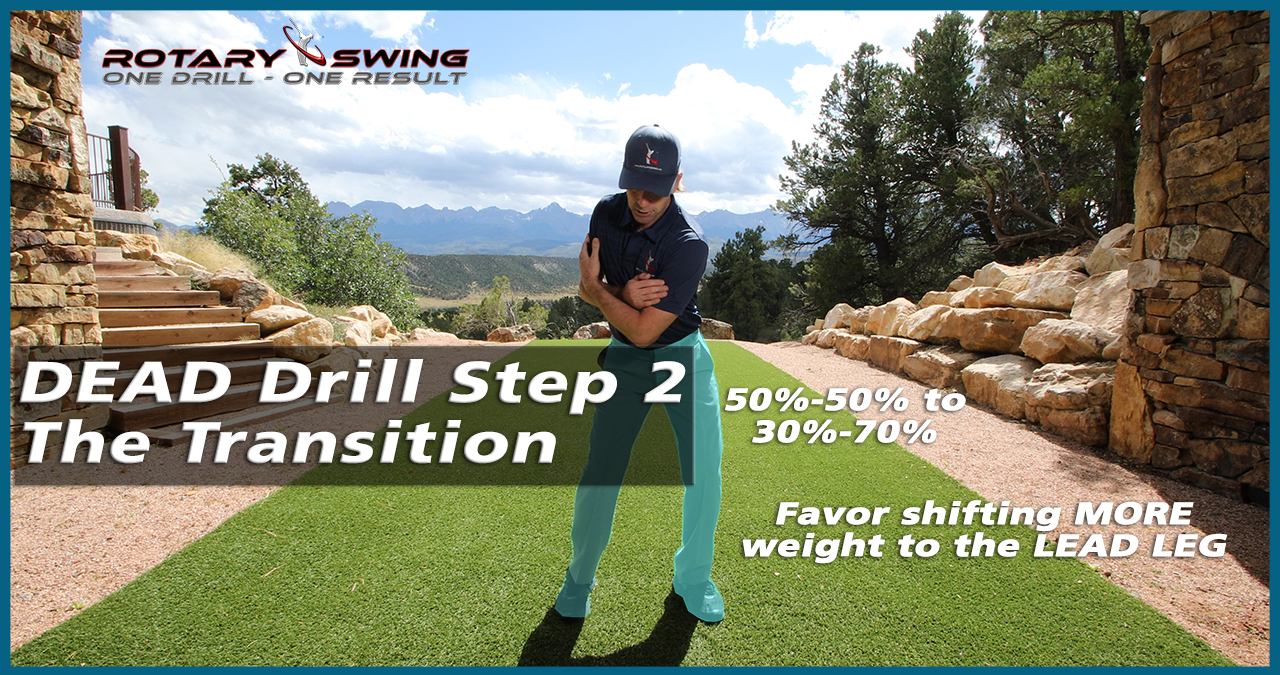 Once you've mastered the back swing. The rest of the swing is honestly a lot easier. There's more checkpoints for the backswing than there actually is for the downswing. The down swing with the dead drill is really, really simple. Once you have the backswing nail, it's all about getting yourself prepared for the downswing by making a proper backswing. So first, what we're going to do is we're going to focus on the transition. The transition from the back swing is a critical component of the swing,

And really has been very difficult for many golfers. Over the years, it's been even difficult to teach.

I've boiled it down into one simple move that you need to focus on to make sure that you have a perfect and powerful transition from face song where we're going to start from your proper backswing position. The whole key here is not doing anything with your shoulders. If you're going to make a mistake, that's the most common one is to start turning your shoulders in the downswing and getting rid of all of that healthy stuff. We built up in the backswing, all the healthy tension. We lose lag. We start casting the club and we start losing power and control over the ball. So as you go back, what you want to focus on is keeping your chest turned away from the target. Keep your chest pointing away while you squat to square. Now, the trick here is you're going to take the pressure that you have on the right side.

And you're going to start transferring it from the 80% or so on the right leg into about back to 50, 50, or even more on the left side. You don't want to go all the way to the left side, but you can't hang back on the right foot either. So at a minimum, you need to get back to square to 50 50 when your hips are square to the target. And we'll look more at what square is from down the line and just a moment. But the key is making sure as you're getting your hips rotated back to square and transferring weight back to the lead leg, that your shoulders get moved by your hips. That's the key. And that's the number one place that people make a mistake instead of keeping their shoulders closed, as they go start back down, people start turning their shoulders right away, and you've lost all of this healthy, muscular tension.

You've built it's up and that's going to cause you to lose lag, lose control of the swing, plane, cetera. So as we go back, I'm going to shift and sit into that left leg. I want to increase the Knee-Flex. As I start back down, this is really important because now we're starting to load up to hit the ball with our legs. If I just start turning right away, I've lost any force I could create by pushing into the ground. And now all of a sudden I have nothing left to hit with, but my arms and hands. However, if I go back and start sitting into that left side, while my head stays still again, not doing any movement from my upper body, all of the movement during the transition is coming from the legs and trunk. You see how little my head's moving as I start shifting back to the left.

Another key aspect of this is that you want to make sure that you're not just pushing off the right leg because that's what starts leading to back pain, causing you to lose your spine angle and your posture and the downswing. So as you're doing this, the left leg, the lead leg is going right to actually start to move independent of the right. Imagine if you were throwing a ball, you would load up on your right leg. And while your weight is here, you would start to move the lead leg independent. And as you're doing this, you would even begin to twist the right foot into the ground, which I'll talk more about in just a second. So as I go back, imagine you had a basketball and you're just going to drop it between your knees. You actually can increase the spacing between your legs, which will help give you a much more stable base, which is critical for being able to put maximum power into the ball from your lower body. So as I go back, my left knee moves over the left ankle. You don't need it to move very far. You don't want it moving past the left ankle. That's moving past neutral joint alignment, but where people make the mistake, the most common is not moving far enough. So focus on moving your left knee in line with the ankle during that squat to square move. Now,

When you really started wanting to put real

Power into the swing, once you feel like you've got a really good grasp of making this transition move, you can start to feel that your right leg, your right foot is twisting and creating counter force into the ground. And this is the opposite of what most golfers do, which is start pushing off the right foot. And their heel starts moving up this way. Imagine an imaginary plane line coming straight up from the side of your foot, vertically up into space. The year foot can't break that plane line. It should never ever move that way. However, it can move this way away from that plane line. And that's what would happen if you were trying to use that right leg to help you build some power and help you transfer your weight over to the lead leg. As you're twisting that foot into the ground, it's a very powerful, but it's an advanced move.

So don't worry about focusing on that too much at first. However, if you've see you're doing this right away, that's an incredibly weak move and produces no power in the swing and causes you just to hang back and have to flip and throw the club at the ball with your hands. So right shoulder back as we get into the back, swing increase the spacing. I'm building a big powerful stance as I'm starting to transfer more and more weight over to the lead leg. Now from down the line, there's some interesting things that we can start to see with our lower body. So the first thing that you're going to notice is that as I'm starting to move back, notice that you can see the logo on my shirt, pointing back at the camera as I complete the entire transition, which we know when our hips are about square to the target, you can see they're closed and now they're back to square.

You can see that my thighs are about parallel. You can still see the logo on my shirt. In fact, my upper body hasn't really moved or changed much at all. That's the key we're loading up and using our lower body to bring the arms and club down during that transition move. So as I'm starting to start back down, I'm going to concentrate on keeping my chest, pointing out the wall back behind me, starting to shift back to the left. I'm squatting down. I'm actually increasing the Knee-Flex slightly. And yes, it's okay for your head to drop just a little. But what's really important is that you're not pushing off the right foot and moving your pelvis into the ball. As I mentioned earlier, how you a great way to hurt your lower back, but also you're going to change all the angles in your swing plane and start swinging way into out.

So what you want to focus on as you start squatting back to square is that your hips actually stay back. If there is something touching your tush line, if you were sitting up against a table or a wall from the backswing to the transition, you would still have both glutes touching that wall or touching whatever's back behind you. You never want to move your hips into the ball, which will happen when you start pushing off the right leg. So the biggest thing to focus on, keep your chest pointing at the wall. Start squatting back to square. Shoulders are still closed and make certain, when you do that squat move that you don't lose your posture. Focus on keeping your left shoulder lower than your right where people make the biggest mistake is they start doing this or start moving their head, start moving their shoulders. Your shoulders do nothing during the transition. Your left shoulder is just going to stay lower than your right as you squat back to square. If you can do that simple squat back to square move, you will have a perfect and powerful transition in your golf swing.


JOIN OUR 404,534 MEMBERS AND GET INSTANT FREE ACCESS TO DOZENS OF VIDEOS!