How to Fix the Two Way Miss in Golf

How to Fix the Two Way Miss in Golf

Struggle with the dreaded two-way miss in golf? One shot goes right and the next goes left? Learn what causes it and a great simple drill to stop playing "Army golf"! 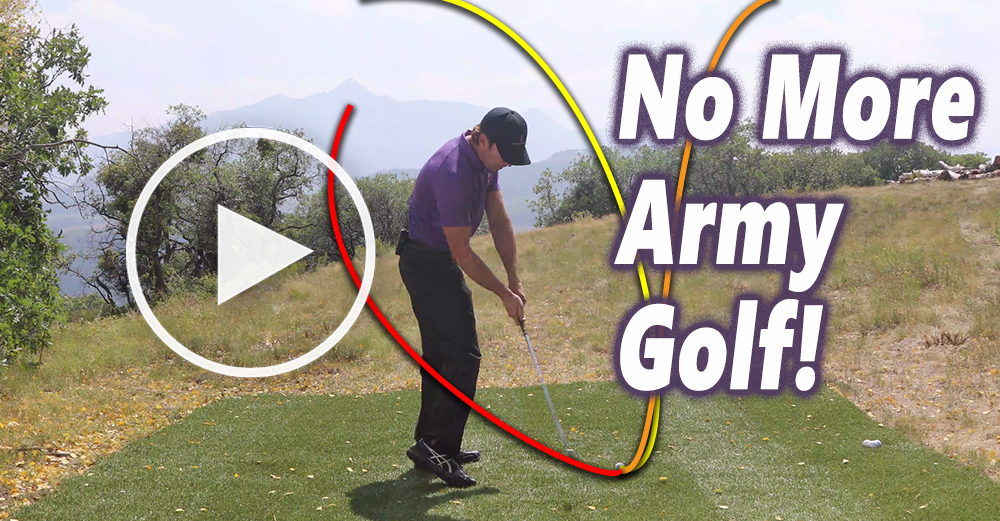 As golfers progress, and they get out of the over-the-top big banana slice move, they start learning how to come more from the inside and approach the ball from a path that tends to be too far from the inside. This starts leading to one thing that makes golf darn right impossible to play consistently, and that is the two-way miss. The two-way miss, for those of you that aren't familiar with this concept, first of all, consider yourselves lucky. As you get better, and you start working on things you'll start to find this is a very common next step as you progress in your golf career, is that you start figuring out little things that shallow out the swing, shallowing moves like rotations, swing a little bit more inside, more axis tilt, et cetera that start leading you to have a path that's too far from the inside.

If I was trying to hit the ball this way, and the club is approaching the ball this way, depending on what the club face angle is doing is going to determine what that ball does. If I keep the club face square to the path, I'm going to hit a 30-yard block out to the right. That's no fun. At the same point, having the same path can actually hit a shot that's going to 30 yards left of the target at the same time. It's all due to club face angle. Most golfers tend to think that when they hit a ball really hard left it's because they came way over the top. The reality is the opposite is actually true. Nine times out of 10 when you're hitting the ball left, it's because you're coming too far from the inside. When the club is swing that shallow, it has a bigger tendency to want to rotate the rote around the heel. Because of that, the club face is closing very quickly, and it's very difficult to time what that club face is doing.

The trick is one simple thing. You've got to fix your golf swing path. That's the number one thing. If you can miss it to the right and to the left, path is your worst enemy right now. You have to understand what tends to cause that path to be too far from the inside. Nine times out of 10 it's the hips driving and getting the arms stuck behind the body. The club can't get back out front until it's too late. As it works to the ball, it's still working this way because I've rotated very aggressively, and my arms have gotten trapped. There's a lot of videos on the site talking about hip spinners, and that's really what this is trying to address, is those who push really hard because as you see, if I turn my hips really hard and shift hard laterally, what happens to my spine? Now all of a sudden I've got way too much secondary access tilt coming into impact. Now the club can come way from the inside. I'm going to try and flip that puppy over as hard as I can to try and save the shot, and that's exactly where the two-way miss comes from. Your body senses the club is coming too far from the inside, and it wants to hit the ball over here, but yet you're swinging over there. Big problems are going to show up.

My favorite drill to help people get used to the feeling of bringing the club down on top of the plane, who are coming away from the inside, is working on keeping the hips very quiet at impact and keeping the right ankle, right heel down on the ground. That's the simplest and quickest way to fix this two-way miss. It's very difficult if your right foot is on the ground, and your hips are severely open, for you to create so much secondary tilt that the club drops that far under the plane. If this is you, the thing I want you to go practice is little half shots, little nine to three shots where you're just working on getting here and feeling more stacked over your joints, having your torso more stacked over your hips instead of leaned way back here.

If you're doing this a lot with the knees kicking in, and the foot is coming up in the air, the simple fix there is to combine this feeling of being stacked with your torso while keeping the foot down on the ground. You're going to practice releasing like this instead of like this. All of a sudden, you're going to find it very difficult to swing too far from the inside because your body is essentially in the way. When you clear your hips out aggressively, that's what gets them out of the way. It makes room for the arms to drop underneath and inside. That's where you start getting this slinging snap hook, push shots, et cetera.

Nine to three shots, just back, shift over, post up. For you, if you're used to getting your hips very open so much so that your heel has to come in the air every time, you're going to feel like your hips are dead square every single time. Your shoulders are going to be square with it. Your hips will most likely be way more open than you think, but if you practice this drill, you can start getting posted up and feel very anchored and solid to the ground, which is an awesome feeling. It helps you get the feeling of the club working down on top of the plane and on top of the ball instead of this. If you've got a two-way miss, go out and practice nine to three drills feeling very tall at impact, right heel on the ground the whole time, and see if that doesn't straighten out that two-way miss.


JOIN OUR 401,489 MEMBERS AND GET INSTANT FREE ACCESS TO DOZENS OF VIDEOS!

Get Your Free Membership to Finish Watching "How to Fix the Two Way Miss in Golf" Right Now!

Get Your Free Membership to Finish Watching "How to Fix the Two Way Miss in Golf" Right Now!

The BEST Deal You'll Ever See!

The BEST Deal You'll Ever See!