How to Shallow the Golf Club

How to Shallow the Golf Club

Do you swing over the top and struggle to drop the club "into the slot"? Want that look of the pros where the hands drop straight down instead of working out toward the ball and steep? This program will teach you how to shallow the golf club like the pros so you can approach the ball from the inside and get rid of that banana slice forever! You'll discover a completely new feeling to the swing that will free you up to release the golf club as hard as you want, giving you more speed AND control! 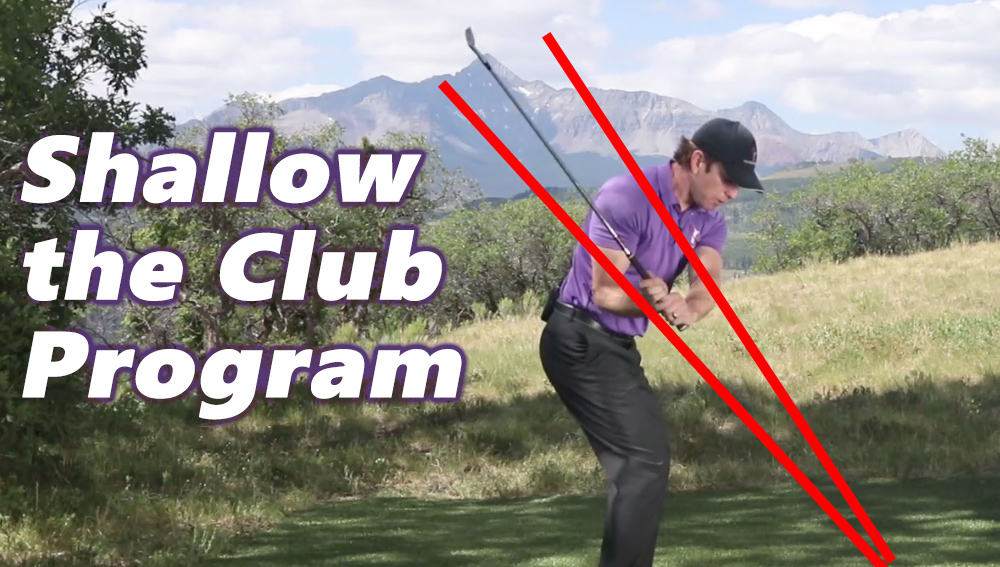 For those of you who still struggle swinging over the top and can't get the club to shallow out. This sequence of drills is going to be a life-changer for you because it's not difficult to shallow at the club. But if you don't understand, what's really causing it. It's very difficult to figure out what's going on and why you keep slicing it and pulling it and all these things to shallow out the club properly. I've got a sequence of movements that I'm going to show you how to do both with the club and without a club that are going to help you feel for the first time maybe ever, what it feels like to come from the inside and release the club properly and start hitting a controlled, powerful draw, every single shot. So at first don't need a golf club. As usual, we're going to start with just the baby body movement.

It's all about what the body's doing. And then we worry about the club. So the key here is first as you're coming down, that transition video that I did the RSA video, just working on shifting this, move this shallow out the club move does not work until you shift your body correctly by working through those transition movements. So if you're shifting and getting your body to move correctly in your shoulders are staying back. Then this is going to be a piece of cake. If you're still turning your shoulders and head and all that stuff, you got to go back to the transition drill because you can't shell out the club without a proper transition, but once you have the transition down, now, what I'm going to start focusing in on is keeping my shoulders shut and bringing my arms down into impact. And I want to pay attention to where my body movements or where my body positions are and what path my hands are taking.

This is important. If you swing over the top, you tend to do this and the hands take a path way out over the plane and then across the ball and right to left when you swing correctly. And especially if you swing over the top, you're going to swear to me that you're swinging this way. It's going to feel horrible at first, but it's different. And that's just something you kind of have to get used to. So as we're going back, I'm doing my transition move. You see both knees are flexing. I'm starting to post up. And now I want my hands to stay in front of my chest and only work down. This is the key. Now in the real swing, everything, my shoulders would be turning a lot more, a lot faster because they'd be, my hips would be moving quicker. But when we're going slow, I can get the feeling of my hands, just working vertically down while still working on my hip movement and transition.

As I do that, my hands are obviously not coming over the top. If anything, they'd be coming too far from the inside. So what I want to do now is I want to take my right hand off and do the same movement and let my hand release into out. And I'll show you what I mean by that. So you're going back, transition, drill, hand, swings out that way. Now when you're swinging left hand only, it's really easy to swing way out to the right, which is a great exaggeration for this drill. If you come over the top and can't shallow out the club, so feeling that your hand drops down by your knee or from your perspective, it looks like it's in line with it. And then release this out to the right is the feeling that you want here. You don't want this. If your shoulders are open at any point during this drill, stop and go back and look at what you're doing.

Your shoulders. Notice that when I released the club or pretend to release the club, doing my transition drill, as my hand drops down to my knee and out to the right look where my chest is pointing it's square or only slightly open because my arm momentum pulled it open. I'm definitely not looking at it this way. There's nothing to see out there. So once I get this feeling of the hands dropping down and releasing out to the right, which feels a little bit awkward at first, then everything's starting to work correctly. Now with my right hand, I'm going to do my right hand. Only like with the throw the ball drill as I come down, my right elbows does the same thing. It comes down to my hip and releases out to the right and turns over, like trying to put top spin on a ping pong shot.

So transition, drill, right? Elbow down release. All I'm doing is trying to get the feeling of the club coming from the inside. And shallowing out now with the club in my hands, do the same thing. Really slow notice. If I just focus on my transition in the left hand, only the way to the club makes my hand, want to travel that path we just worked on. So as I go back and I just do this look where my hand is now the clubs too far from the inside. Don't worry about that yet. That's a good problem for us. We were swinging over the top and release out to the right. So my path is technically going to be a little bit too far out to the right that's okay. You're swinging over the top right now. This is a good problem. So it's just a little bit out to the right and now I'm starting to let it release with some speed. If you're still struggling with getting your shoulders square, go really slow. Stop at impact and check. Are my hips a little bit open or my shoulders square.

Still looking down at the ball and did

My hands drop down. This is the key. If you're used to doing this and turning your shoulders and pushing from that right side, this move is going to feel very bizarre, but it's going to feel awesome. Once you learn how aggressively you can release the club when you're coming from the inside. So you can do this five, 10 minutes a day, feeling that the hand drops while you work on your transition, little transition pump drill. My hand comes down to the knee, swings out to the right right hand with the clubs, same thing, transition, drill. I'm just kind of pumping, working my hips. That's bringing my hand down and now same thing as I released the club, notice that my arm is releasing, not my shoulders. My arm just lets the club go. It's a natural effortless release, just like throwing a ball. And because my weight shift and transition is working together.

I can get it to come from the inside now, same drill, but we're going to have both hands on the club, a little pump drill. I'm working on my weight shift, working on my lower body movement. Now that the right hand come off before this is key because you're going to feel how throwing that club creates a lot of speed without you working your body hard at all. This doesn't take any effort for me, just getting the same feeling of my hands. Dropping down to my knee is a little bit of an exaggeration of course, but that's the idea. And then releasing and slowly start keeping that right hand on there a little bit longer. This drill will get you. If you do it in a mirror and you start paying attention to what the club's doing, your hands will be coming down on plane, dropping the club from the inside and you start hitting a powerful draw on every shot.

Get Your Free Membership to Finish Watching "How to Shallow the Golf Club" Right Now!

Get Your Free Membership to Finish Watching "How to Shallow the Golf Club" Right Now!