If you've ever wondered whether or not you should have a forward press at setup, this golf instruction video answers this question and shows you why. Inside you'll learn the proper golf club shaft position at address and how to achieve it. 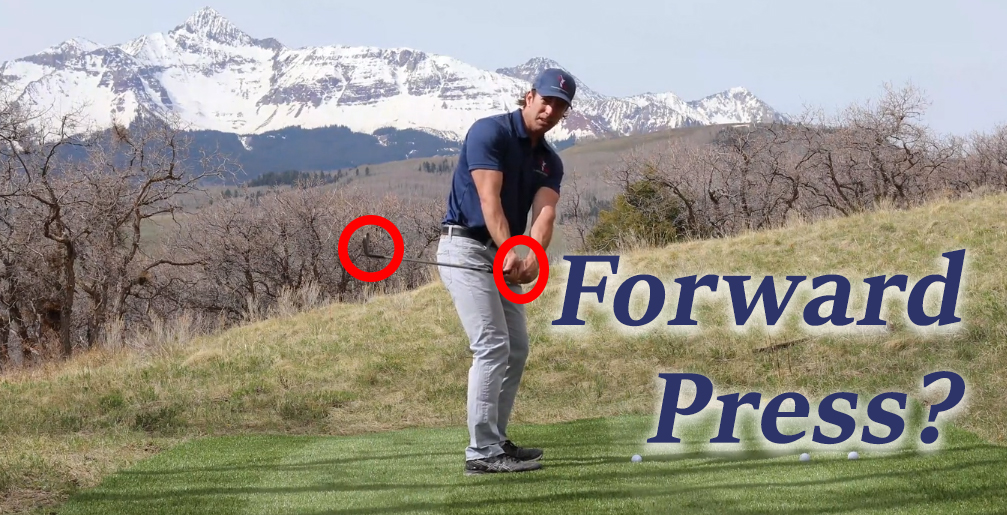 One question I get asked quite a bit is should you have a forward press at setup, or what is the correct golf club shaft position at address? Now, a forward press has been taught for a long time for a bunch of different reasons, but as you've probably noted on the site, I advocate a vertical shaft with no forward press. Now, I want to talk about why and what's gonna happen when you tend to put a forward press in there.
So, first of all, what is a forward press, exactly? Simply, it's having the shaft leaning toward the target. That's the simplest way to think about a forward press. You're pushing your hands forward. A lot of people use this as a swing trigger to get the swing started. So, they start normal, the proper, with the vertical shaft, and then they push their hands forward and then take the club back.
Now, what tends to happen is that, obviously, when you put your hands forward, what are you doing to the relationship of your hands and club head? So, now my hands are already in front of the club head. My club head is behind my hands. Now, for most amateur golfers, they already do that quite well. This is the number one move for most amateurs. They put their hands forward and then rip the club way back to the inside, lift it up, and then hack down over the top.
The last thing on Earth you'd ever want to do is put your hands further ahead of the club head by doing a forward press. Your hands, for most golfers, already tend to get the club head way too far behind, because you're overactive with your hands. You'll notice that most tour pros set up with the shaft vertical and then just turn their body, and the club head is very, very quiet. There's no hand movement whatsoever, and that is a huge, huge thing.
When you're wanting more consistency in your golf swing, the last thing you want to do is add variables. When variables are anything, extra movement that you add to your swing that you don't need. In this case, if I just set my wrists, I've not moved my body at all. I've only set my wrists, but I've moved the club four feet. Now, I've got to unwind that at some point in the downswing. Now, I want my golf swing to be as ridiculously simple with as few moving parts as humanly possible, so the last thing I want to do is get my hands overactive in the swing.
I want my hands to be very quiet, and I want the club head to stay in line with hands and in-sync with my chest. So, as I turn back going really slow, the club head is perfectly in line with my hands. As I focus on my takeaway move, notice the club head is gonna stay in line with my feet and with my hands, and it's right where I want it to be. If I did that with a forward press, look where the club goes. So, that's why I don't advocate a forward press, because you're presetting your hands in a position where they're already way ahead of the club head, or the club head is behind your hands, and now you've got to try and do something to unwind that in the downswing.
So, the simplest thing to fix that, don't do it. Don't add a forward press. If you take the club back with your body, your hands are gonna stay in line with the club head, and your golf swing will be much, much simpler.
Next, learn the correct golf stance width for your body to increase your swing speed.