This golf setup check is critical to getting rid of a reverse pivot and over the top downswing. If you're setup is right side dominant, you will struggle with not slicing, hitting it fat and many more ball striking woes. 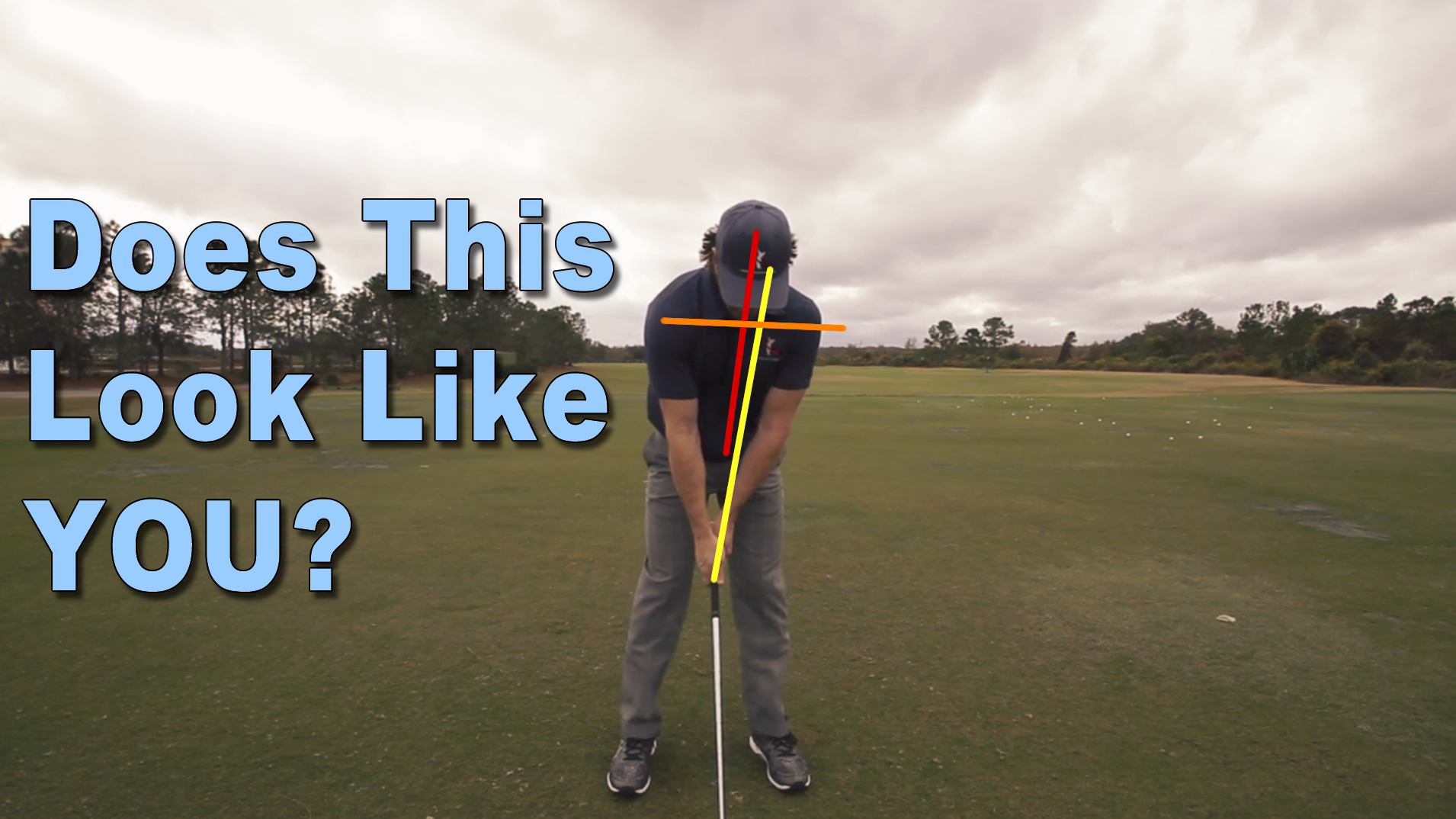 Hey Rotary Swing golfers, Chuck Quinton here. I want to talk about one of my biggest pet peeves that causes you guys more trouble than anything else, and it all starts from setup. So often, especially what I see in my unlimited review groups, with people setting up what I call right side dominant. Now, what does that mean? Without fail, one of the biggest things that most people overlook is axis tilt at setup. I've talked a ton about axis tilt. You have to have axis tilt at setup. However, for most of you, when you start getting axis tilt, you're like, "This doesn't feel right. I feel like I'm like this. How am I supposed to hit a ball from here?"

Now of course if you take the time and look in a mirror, you realize it looks like this, it looks normal like every other tour player on the planet, but you feel like this and you're relying on your feel. As I've told you a million times, I don't care how you feel right now, you're gonna get used to it. It's all about what the mirror tells you, because the mirror doesn't lie, and the video camera doesn't lie. You know you have to have axis tilt, you know everybody has axis tilt, but why do you keep setting up like this? That's this right side dominant stuff that keeps coming into your swing. So, let's talk about what it looks like, so that you can discover whether or not you are setting up right side dominant, and let's talk about all the things it's going to cause issues with, and how to fix it.

So, when I see somebody right side dominant, the first thing I notice is no axis tilt, or even negative axis tilt where they're leaning their spine toward the target. So if they're setup like this, I know that we're in trouble. We've gotta start from scratch. You've gotta understand the whole big picture of the swing. We've gotta be body-centric, left side dominant. This pulling force is what ... You've got to align yourself with Newton. Nobody has outsmarted Newton yet, so you can't deny the physics of the golf swing. So when you're setting up like this, I know the first thing you're gonna do is take that club back with your right arm.

And so, that's gonna look like this, and you're gonna get into your right hand dominant position, shut clubface, this weird gang handshake that I talked about in my handshake video, where the hand's on top ... the right hand's on top of the left, because the right hand is in a position to hinge back. When you setup right side dominant with no axis tilt, and your shoulders tend to setup really level, the right hand is gonna tend to get into a really weak grip position. So, you'll notice from a right side dominant position this thumb and forefinger line kind of go straight up my head, and a lot of times in my students I even see it going towards their left shoulder. Really weak position.

So now, if my hand ... Forget golf for a second. If my hand's in this position, what does it want to do as I start rotating back? It wants to hinge on top, it doesn't want to rotate open. Why? Because, you've already put your hand in a weak position on the golf club. If a weak position on the club, what is that gonna tend to lead to? An open clubface. So, what do you want to do instinctively to compensate for that? Shut the clubface, 'cause you already have a really weak grip, you're gonna take it back shut, and now all of a sudden your golf swing is a huge bucket of compensations. You've got nothing but compensatory moves to try and bring that club back. And almost without fail, with this weak right hand, upright spine, shut clubface coming back, guess what you're gonna do coming through? You're gonna flip and push the club coming through, in a desperate effort to try and square it up. Let's not do that, because that's going to create every other problem under the sun, and you're never gonna be a great golfer.

To be good, we have to use the fundamentals that every single tour pro uses on the tour. There's a reason that they're tour pros, because they follow the RST fundamentals, so they have axis tilt. As you have axis tilt, that allows my right hand to naturally come under the left and get into a normal, stronger position at address, where this right thumb and forefinger point towards the right shoulder. This feels really weak, and not very dominant. I kind of call it a passive right hand, because you're putting it underneath, and the left side is getting dominant now, it's on top of the club. And this is coming underneath, employing a shared power move. You don't want to put this thing in complete control, because then you're going to go into all the stuff I talked about during the take-away, and so on.

Also, when you start setting up with no axis tilt as I've talked about before, you've got this weak right hand, high right shoulder, shut clubface coming back. Look what happens to my spine as I go back. Almost always, when you have no axis tilt, unless you do a lot to move your head off the ball, which is of course not desirable, then we're almost always going to reverse pivot. And it all comes again from wanting to be very right side dominant, right shoulder high, right arm on top of the club. So, if that's you, when you look at yourself in the mirror and you see that your spine's really upright, your right hand's really weak, clubface is going back shut, or you're flipping it open with your hands, one of the two, but you've got that weak right hand, you need to understand that you're being very right side dominant, and you need to go all the way back to the beginning.

Work through RST Five Step, and add that lead arm, that third step. Take your time working through that, because your brain is still saying, "No matter what, I want to hold and do everything with my right hand," and that's going to cause you all kinds of problems that you already know about. So, check yourself in the mirror, watch yourself, make sure you're not being right side dominant. Axis tilt. Stronger right hand, so that it ... This thumb and forefinger go up your right arm, and your shoulders have a little bit of tilt to them, and that will get you in a much better starting position.