Pushing with the Left Side in the Golf Takeaway

Pushing with the Left Side in the Golf Takeaway

An extremely common swing fault, so common that many golf instructors actually teach the swing this way. In this video you'll see why this is bad and how to stop it.

Left Arm in the Golf Swing | Let Your Right Arm, Not the Left Do it All in the Backswing 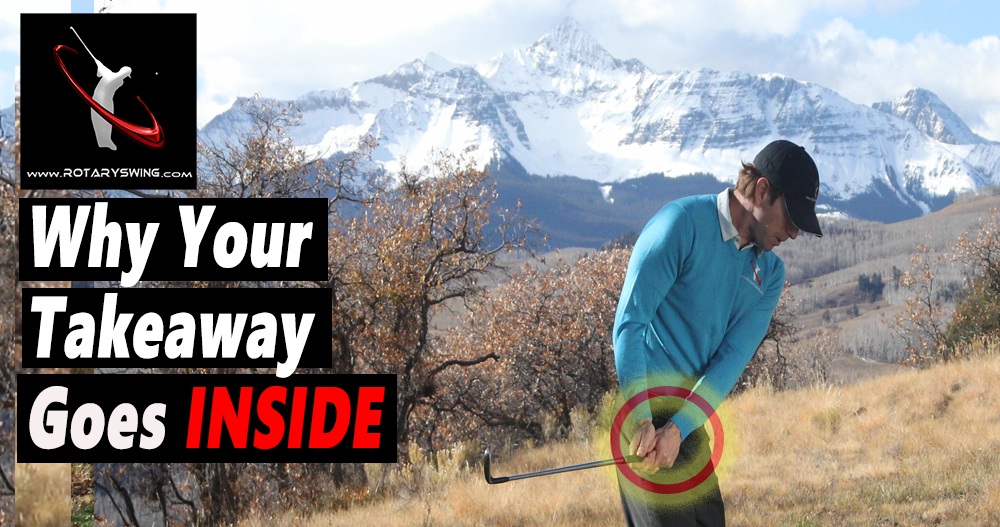 The left side push in the golf takeaway is a common mistake and challenging one to break for most golfers. When the golf swing starts with this pushing motion, the club will tend to work deep inside and the left arm will swing across the chest. This leads to a deep takeaway and then a disconnected lifting of the arms to get to the top of the backswing.

To avoid this detrimental move, you need to focus on rotating your body rather than swinging your arms and hands. By focusing on the shoulder blade glide and rotating your core, you'll see that the arms and hands have to do very little during the takeaway and your golf swing will become much more consistent because of it.

... Most of the videos on the website emphasize pulling, because most golfers way overdo the pushing side of things. It's a dominant movement. It's much easier to grasp how that would apply power in the swing, and since that's what most golfers try and feel in their swing, it's very easy to overdo pushing. Especially with regards to the backswing, I emphasize pulling this right shoulder back, and that is a critical part of the swing to help you stay centered. But at the same point, you must understand that if your shoulder blade ... Your right shoulder blade, for right-handed golfers ... Is moving in. This is my spine, this is my shoulder blade, it's moving in towards my spine a couple inches, you're in the backswing ... Well, the left shoulder blade needs to move the opposite direction.

That's an important thing to understand, just from a fundamental aspect. As far as how humans move [biomechanically 00:00:52] when it comes to rotation, is that your muscles work in pairs, a right and left side. When I'm rotating my head to the right, one side's pulling and one side's pushing. The same thing is true in the golf swing. When we're rotating our bodies back, we're using our obliques on the right side and the left side. The same thing is true with the shoulder blades. As the right shoulder blade's moving back, these shoulder blades move your arms and shoulders forward and up and down and all of these directions. As I'm moving this right shoulder blade back, this is going to move this right hand further back. You can see that my right hand is now effectively shorter than my left, even if I don't move my left arm. To make up for that ...  Of course my hands are on the grip together ... If the right hand gets pulled back, the left hand has to go forward.

And so, a lot of golfers have taken this concept of being in the box and feeling their shoulder blades down, and they try and maintain that throughout the whole swing, but it's much more dynamic than that. While you want to be in the box ... And we emphasize that a lot, even at the top of the swing, because we see golfers all the time who take their left shoulder and then move it all the way across their body. Then this is the top of their swing, and then their shoulders up like this so it's buried into their chin, and of course they're very out of the box. They're very disconnected from the muscles of the core. But, your left arm has to move out of the box to some degree at the top of the swing, because these muscles of the left shoulder girdle need to get stretched. Because remember, what you're gonna do to start the downswing, as far as the arms are concerned, is you're going to pull down with the left arm. If you're gonna do that with any speed whatsoever, these muscles have to be stretched before they can be contracted with any force.

If you try and keep your left shoulder back all the way to the top, you're not gonna have anything to pull down with. But now if you go to the top and you stretch, and that left shoulder move forwards while the right one moves back, now I've got something that I can pull my left arm down with, and get some speed in the downswing. Understand that there's always a push and pull relationship in the swing, when it comes to rotation. If you're pulling your right shoulder back two inches, your left shoulder needs to move forward at least two inches as well.

Again, remember that we're doing this pulling motion to help us stay centered, and to help stabilize the club through the hitting area and all these things. Again, most golfers way overdo the pushing side of things, and that's why we don't talk about it a lot. But I do see a lot of golfers, who are typically better players, who really try and follow everything to the exact tee, and they miss some forest for the trees for some things. It should make a lot of sense that, okay, if this arm's moving back, then this one has to move forward to match up, or my arms wouldn't even fit on the club. And so, if you feel really restricted at the top of your swing and you feel like you don't have any power, this could be one of the reasons. That you're not letting this left arm go back.

Now, here's an important part that you don't want to overdo. If you're the type of golfer who sways off the ball because you're pushing from the left and then pushing from the right coming down, you ignore this next piece of advice. This is for golfers who are really restricted at the top, and are really good at pulling this right shoulder back, and that's kind of all they do. Once you get that movement down, you're not gonna really feel it anymore. It's gonna be normal to you. It's natural to you, like you don't think about how you flex your legs when you walk. It's normal and natural to you, because you've done it a lot.

Once you've done this right shoulder blade glide a million times, and you really feel like okay, I can do it, and you're doing it really well, but you've been keeping this left shoulder pinned down against your body, and too far in the box at the top of your swing ... You may feel that you do nothing but push from the left side. Now of course, you're not going to just do that again. As I said earlier, everything's working in pairs, right? But if you're already doing this right side, and that's a natural movement for you now, you're not going to feel that anymore. You don't want to keep feeling it, because again, you need to let things happen naturally. Once you do enough repetitions, you need to let things get transferred over to your subconscious.

So, right shoulder's pulling back, but you're going to feel that you're just pushing back with the left. That's okay, assuming that you're moving correctly with everything else. Again, we don't emphasize pushing a lot. But for some of you, if you're already moving the other parts correctly, you may need to feel just pushing from the left. Now, here's what it's gonna look like if you're not doing it correctly. You're going to just push from the left, and you're either gonna move off the ball ... So now we know we're not pulling back to counterbalance this pushing motion ... Or, you're gonna get to the top like this. I haven't made much of a turn here. I've just taken my left arm and swung it across my body.

That's what 99% of amateur golfers do. They don't pull back with the right side at all. That's why we don't really talk about pushing, because you're already so good at it. We don't need to keep doing something like that because we're already doing it, and overdoing it. That's why we emphasize pulling so much. That's not a natural motion for most people. It doesn't feel as powerful, and it's not. It's, again, more of a technique issue. Again, if you're feeling like you've been really restricted at the top ... Restricted, and your left arm's kind of cramped down and you don't feel like you have any power, or anything to pull down with the left ... You may feel that you're just pushing, and some people describe as kind of reaching as they're going back to the top of the swing. They're taking their left arm and kind of reaching out that way ... Again, as long as this right shoulder's back, and you're making a full turn and not moving off the ball, perfectly okay to feel that.

So again, it's okay to push. It's natural. Again, most golfers are already pros at it, so we need to counterbalance everything with pulling. You need a balance of all things in the swing, and pushing and pulling is one of them.


JOIN OUR 389,997 MEMBERS AND GET INSTANT FREE ACCESS TO DOZENS OF VIDEOS!

Get Your Free Membership to Finish Watching "Pushing with the Left Side in the Golf Takeaway" Right Now!

Get Your Free Membership to Finish Watching "Pushing with the Left Side in the Golf Takeaway" Right Now!