Pushing vs. Pulling in Putting

Pushing vs. Pulling in Putting

Understanding the difference of pushing vs. pulling in putting will change the way you think about the entire golf swing! 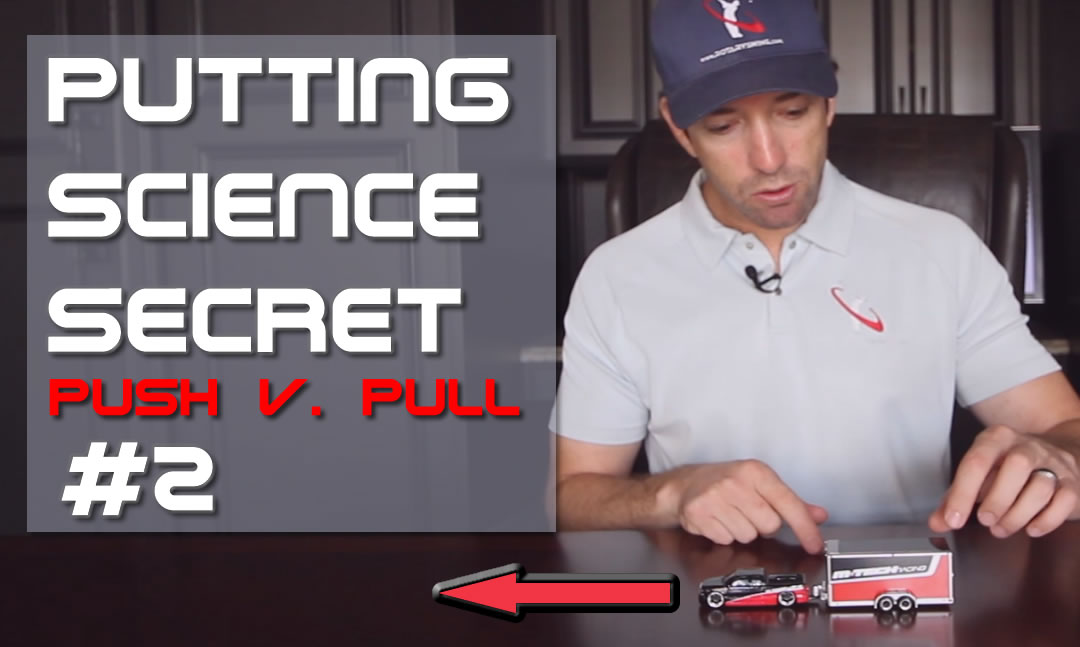 All right, guys, listen up, because if you're like everybody else that's seen this golf instruction video, this is going to completely change the way you think not only about your putting, but about the entire golf swing, in general. That's how important this is. I know it seems like I have a toy truck here, but this is really the most important golf training aid that I have in my arsenal because it helps really illustrate, it helps you understand why you're struggling with your golf swing and how to really change the whole concept of the way you think about the swing because what most golfers do is the opposite of what I'm going to show you.

If you've ever pulled a trailer, tried to back a trailer up into the driveway, you know exactly how finicky these things can be. If you're trying to back it up, if I push from the front of this, you'll notice that the trailer and the truck wants to jackknife right away, but as soon as I pull it straight, notice how the trailer falls in a straight line. Now as soon as I start backing it up, it wants to rotate really quickly and I'm not doing anything to cause it to do that. That's just the nature of how this works, but when I pull it, notice how the trailer, even though it's at a 45-degree angle here, as soon as I pull it, it instantly aligns itself with the truck. How weird is that?

Now why when I push the truck does the trailer jackknife like this? If I take the trailer and move from the trailer side, watch what happens to the truck. It just follows along, but if I push from the trailer, all of a sudden, the trailer jackknifes. What's different here? The difference is the force of movement. What I mean by that is, what's causing this stuff to move? In this case, I am the force of movement, and it's where I'm applying my force that causes this trailer to do two completely different things, depending on where I am moving the object from. Your golf swing abides by these same laws of physics. All movement is a push or a pull. When you think about it, everything that you're doing in life can be boiled back down to a push or a pull.

In a rotational movement, like a golf swing, this is still true, because we have two different pushing and pulling forces. The pulling force in a golf swing is what we call centripetal force, and the result of that, which is a pushing motion moving out away from the force of movement, is called centrifugal force. When it comes back to our putting stroke, what we have to understand is that what most golfers do is they try and push the putter head through the hitting area and they do the exact same thing in their golf swing, which is what rotary swing's completely built around is this concept of pushing versus pulling.

When you take your right side, your dominant side, which most all golfers are right-handed playing from the left side of the golf ball, that they use their right side because it's the most coordinated hand in their body. They don't want to use the left side. It's not trained very well. It's not coordinated very well. They use the right side, but this right side is a pushing force because it's behind the object you're trying to move, just like if I'm the trailer and I'm moving the truck from the trailer, it wants to jackknife because the force of movement is behind the object that I'm moving versus if I am in front of the object that I'm moving, if I pull, it stays straight.

In the golf swing, what do you have that you can pull or push with? It's pretty simple. I can only pull with the lead side, or in most people's cases, right-handed golfers, I can only pull with the left side of the body and I can only push with the right side of the body during the down swing at impact when it really matters. What you're really doing in your golf swing and in your putting stroke, if you're using your right side in a conventional putting stroke to move the putter, you are doing the equivalent of trying to push this trailer down the highway. Not going to work out real well.

As soon as you start backing up, it wants to jackknife because the two centers of gravity of these two objects have to be perfectly in line in order for them to travel in a straight line. As soon as the center of gravity gets moved to one side or the other from the other center of gravity, they want to rotate around themselves. In this case, we have a pivot point, which is the trailer hitch, and it wants to rotate around this trailer hitch because the two centers of gravity aren't aligned. When I pull it, by the nature of pulling, these two centers of gravity align themselves automatically. That's just part of the nature of it. In the golf swing and in the putting stroke, guess what you need to be doing.

In this next video, I'm going to show you how you actually start ingraining this movement and learn how to move your body in this pulling motion to get rid of this jackknife in your golf swing so that you can start having a much more consistent stroke in your putting stroke and in your golf swing.


JOIN OUR 404,535 MEMBERS AND GET INSTANT FREE ACCESS TO DOZENS OF VIDEOS!

Get Your Free Membership to Finish Watching "Pushing vs. Pulling in Putting" Right Now!

Get Your Free Membership to Finish Watching "Pushing vs. Pulling in Putting" Right Now!