Using the Big Muscles in Putting

Using the Big Muscles in Putting

Learn how to properly use the big muscles in your putting stroke. 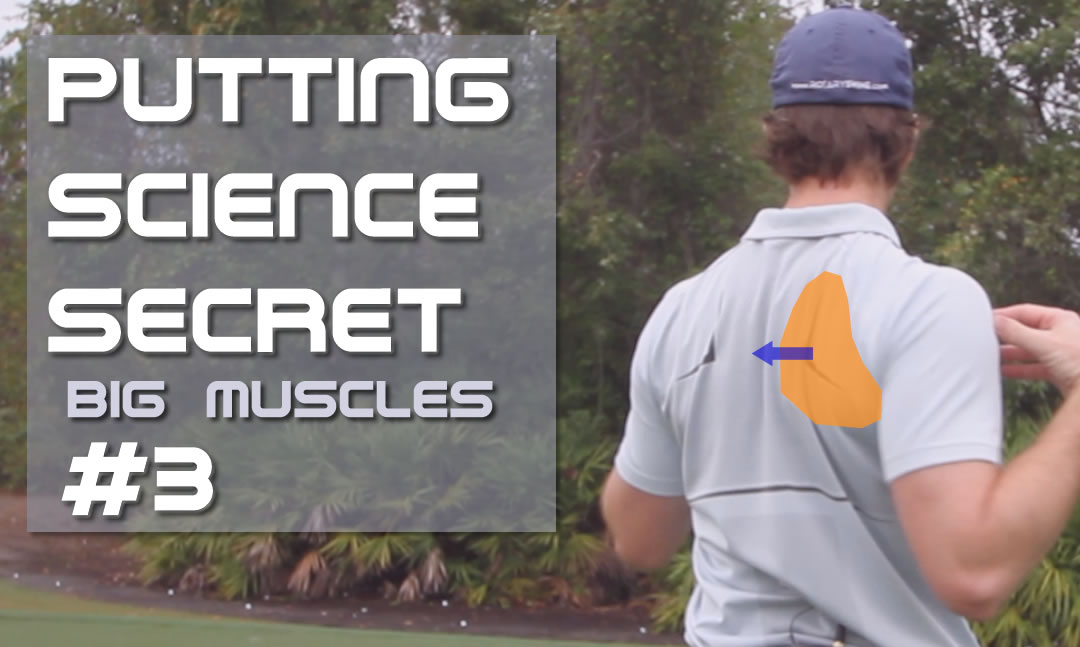 Now your eyes have been opened to this push versus pull concept and it doesn't just apply to your putting, it applies to everything that you do with the golf swing if you want to work with the laws of physics of course, which I know you do. Let's talk about now how we can implement this in our putting to get rid of the yips, to get rid of the ball bouncing all over the place and not starting online, all of these things that you've struggled with, you're going to start understanding how easy it is to repeat these movements when you start moving from the right place in your body.

That's what not just what Rotary Swing is all about, but what we're going to talk about in putting in general. What the yips really are is simply a flinch typically of the right hand, the trailing hand, in the putting stroke. Most people are right handed. We've talked about he push versus pull concept and you're starting to understand okay, well there's only certain things I can pull with as I understand the stroke, so when you start using this right hand to try and hit the ball or start it online or slap at it, that's when things start going way off and it's these little flinchy, fast twitch muscle fibers you have in your right forearm, in your right side of your body that make putting really, really hard when you're trying to use these to control the stroke.

You need to be really precise in putting, but more importantly you need to be incredibly consistent, even if you tend to set up a little bit open or a little bit closed or tend to start the ball offline in one direction or the other, as long as you do it every time you can get away with it. You can set up open and block the ball down the line, just do it every single time. The key to doing the same stroke every single time is making it as simple as humanly possible.

Anybody can make a machine really complicated. Your goal is to make this machine, your body that's a machine that's using this putter head as simple as humanly possible. You need to reduce the moving parts as much as possible. So how do we do that with a putting stroke and abiding by these laws of pushing versus pulling? Well, it's pretty simple. You have two things that you're going to focus on on your putting stroke from this point forward. No more what you're doing with your hands or your forearms or any of that stuff.

What is this going to look like in our putting stroke? It's going to look like you're rocking your shoulders, which you've heard a million times, but the problem is when people start rocking their shoulders they start doing this stuff, and that's going to throw the putter and your spine all over the place. You want your spine to be pretty much fixed in space relatively because it gives you a fixed reference point. If your spine's not moving all over the place and it's staying constant, then it's really easy for this putter to work more on a pendulum, which again, we're trying to build a really simple machine here.

The putting stroke should be really simple, and the simplest way to do it would be to have a fixed point and just have it swing back and forth. Then the putter is always going to swing back on the same plane and path. Well, we can't really swing a putter like this, but we can get close by trying to replicate this movement with our body by keeping our spine at fixed and rocking our shoulders back and forth. As I move my right shoulder blade back and I move my left shoulder blade back, all of a sudden the putter's going to start doing the same thing.

More importantly I'm moving very little. As you can feel as you start doing this at first, you're like, "Oh, I'm trying to feel this shoulder blade thing. It doesn't really feel like I'm moving very far." You're not. That's the whole point. If you move very little from the center, because we're making kind of a circle here, very, very small semicircle in the radius of our stroke, as the radius increases the putter head's going to move further and further the less you move, or the more you move in the center.

You are going to move very, very little, but the putter is going to move a long ways. That's the definition of efficiency. Not only that, but because you're just focusing on moving your shoulder blades back and through you don't have to worry about what your hands and your forearm and what the putting path and plane and all that stuff, it's taken care of by your setup angles, which we're going to talk about, and your movement of your body. Your arms, just passive clamps on the clubs. Holding the club lightly, they don't have to do anything. They're just going to be guided by what your shoulder blades do.

Get Your Free Membership to Finish Watching "Using the Big Muscles in Putting" Right Now!

Get Your Free Membership to Finish Watching "Using the Big Muscles in Putting" Right Now!

The greatest golfer of all time wished he had changed THIS about his putting!

You'll learn not only Jack's secret, but you'll also get 4 more BONUS videos:

You can BUY a better putting game - and it will only cost $17!