Left Hand Low Putting: What You MUST Know 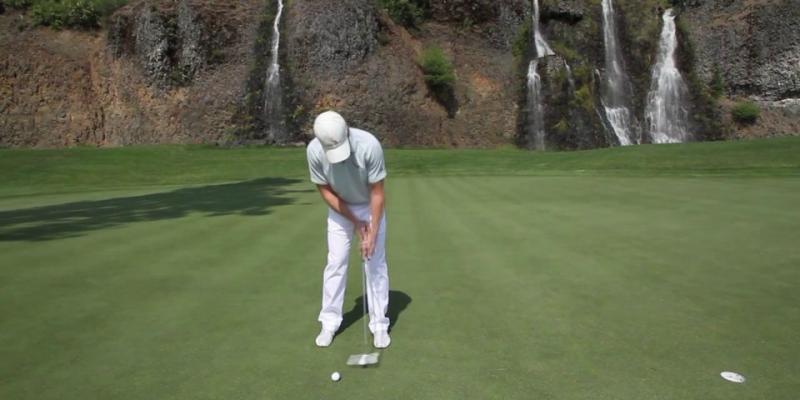 One of the most interesting things I've ever heard Jack Nicklaus say that ... He said that if he could ever go back and learn how to putt differently, he would have started out putting left hand low. A lot of golfers, putting has become more art than science for a lot of people. One of the things that he was saying is that there are fundamentals there when it comes to pushing versus pulling in the putting stroke. Of course, pushing versus pulling is a big part of what Rotary Swing Tour is all about, and the same can apply to putting. Even though we're not talking about nearly the same amount of muscle movement and load and power and those types of things, the same fundamental forces are at work here.

The best way I can explain this to golfers is when I talk about if you've ever walked to the cart, a push cart or a pull cart, where you lay your clubs on it and drag your bag behind you, if you push it down the fairway, what happens? Inevitably, it will make a zig zaggity line down the track. Unless you push it directly behind the center of gravity and keep the force of movement, which is you, in line with the center of gravity the entire time, it will zig zag. Now what happens when you pull it? Of course, when you pull it, it forms a perfectly straight line, because it's always moving towards the force of movement. Of course, that's a fundamental aspect of RST.

Let's look at some fundamental changes that have to be made for you to putt left hand low successfully. As I mentioned, you're wanting to take the right hand out of it. When you're taking your grip, your primary focus needs to be the left hand. What we're going to do is we're going to use basically the same putting grip that I teach with the right hand low, but you're going to put the left hand in a lower position, but you're still going to have what is effectively a very weak left hand grip and a very weak ... Effectively very strong opposing right hand grip. That's to keep the wrist ... I'm exaggerating here, but the wrists in this position, where they can't really fight against each other. When your wrists are in this position, they have a lot of range of motion.

It's very easy to get wristy and handsy with your putting stroke, and that's where most people struggle. When we put our left hand in this weaker position, the corner of the grip will run right through the lifeline and the thumb will sit just to the side. You'll see that my wrist is in this position. It's in a position where it's kind of locked in there, and it can't move. Again, if you're putting left hand low, you don't want wrist in your stroke. You're saying I want to take that out, and I want to use more of a shoulder rocking and pulling motion than anything else. We're going to put the wrists in that position.

With my wrist in this position, I then bring the right hand on in the same position, where now this piece of the grip is in my right lifeline. Now my thumb sits to the right side of the stroke, and now my wrists are in a position where they can't move against each other a whole heck of a lot. There's still going to be some freedom of motion there, but not nearly as much as if you bring your thumbs down the grip. Feel that for yourself and feel how much moment that gives your hands, and then put your wrists in this position, and see how much it limits it. You can see it here just on video. It takes a lot of the movement out.

Holding the grip like this then puts it in a position where our shoulders are going to be the dominant force. Let's see what that's going to look like. With my hands here, all I'm going to do is rock my right shoulder back and my left shoulder back. On the through stroke, I'm going to focus more on this motion, the pulling with the left side. I don't want to feel a lot of pushing motion with the right. That's going to make it very hard and going to take the whole point of putting left hand low out of the picture.

Left hand low, shoulders rock. Now, this is really important from a set up perspective is that we want to get our shoulders in a steeper position. Let me show you what that's going to look like here. With my left hand low stroke, if I stood up really tall, what's going to happen is that I'm going to have a more around kind of stroke. With left hand low, you're going to envisualize more of a straight back and straight through stroke.

It doesn't happen. It does work on an arc, but that's going to be more of your thought, and because of that, you want a face balanced putter. You don't want a putter when you hold it up like this that the toe drops to a 35, 45, or even 80 degree angle. That's more of a golfer that's going to stand more upright and have a putting stroke that's going to flow and release the toe. You don't want that. You're going to go more shoulders.  What you want to do is get yourself in a position where you're a little bit more rounded with your shoulders and rock them straight back and straight through. Now you can see that my putting stroke is very quiet and relatively very square. It's working on a little arc, but not much.

Those are the main fundamentals that you want to get with putting stroke with left hand low. Steeper shoulders, so you're going to round a little bit more in your upper back, the thoracic, and as you get more rounded, that's going to allow your shoulders to rock more this way instead of rotate more this way. Do that, and your putting stroke ... If you struggle with getting a little handsy with it, your putting stroke will improve, and you'll feel a lot more consistent. Again, the hardest part is just getting comfortable with the distance, because you're taking these really sensitive muscles out of your hands and wrists out of the picture. With practice, you'll get comfortable with it, and you can become a great putter again.