In this video, I'll show you how Jason Day and Rory Mcilroy use ground force for speed and 1 keep move to be able to release the club with tons of speed in the golf swing. 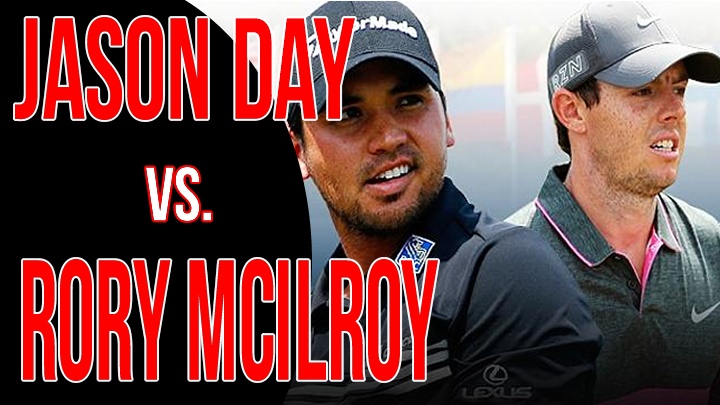 This week we are going to be doing a show case show down with two of the world's best players, Jason Day and Rory McIlroy, who we saw square off this weekend at the Match Play Championship in the semi-final match where Jason Day was ultimately able to prevail and then move onto the finals where he picked up his next victory out there. Congratulations to Jason Day.

This week we're going to be focusing in on club head speed. A lot of people come to the website wanting to ramp their club head speed. We're going to be focusing in on one of the most powerful moves that you can make in the golf swing to help get a good boost in speed and that is posting up and releasing. I'm going to be talking about one really critical move when you start to post up that's going to help you get maximum speed at the bottom of the swing arc. Let's go ahead and get started now.

As I said in the opener, we are going to be focusing in on speed this week. These are two really good candidates to start showing you one of the more powerful moves that you can start to add to your golf swing. Once you've started to make sure that your weight transfer's in place. Weight shift is extremely critical for the golf swing and if you've started to master your weight shift from the right side back over to the left side, you really start to wake your legs up, then this is a great move to start to be able to really increase that club head speed.

I will put a disclaimer at the front of this and say that if you haven't mastered weight shift then you need to make sure that you have that step in place before you start working on posting up properly. Posting up will be much easier with your weight moving over to your lead side. So let's go ahead and take a look at things here. I'm going to go ahead and get both players up to the top of their swing.

You're going to see very similar style looking golf swings up to the top. Yeah, there's some minor differences in the way they rotate. There's some minor differences in the hand position at the top of the swing. Jason does use a little bit more elevation here. Rory's tends to look a little bit flatter at the top of the swing. Again, both of these golfers have very good golf swings through the take away and the back swing. Are there things that we might change in the down swing to allow them to be a little bit safer? Yeah, of course. Again, we're not going to bash either one of these players. They're both extremely fun to watch. Jason's obviously battling with a little bit of a bulging disk issue right now in his back and hopefully he gets that resolved on the sooner side so he can continue to grace us with his presence out there.

Just taking a look at the big moves over to the lead side. You're going to see it done a little bit differently from Jason and Rory. Rory is going to make a little bit more of a squat move. If you watch his blue shirt here, it's peeking out underneath the line. What I want you to do is watch how he sits into his lead side here. So you're going to see that it drops about two to three inches as he's starting to work and shift his weight to his left side.

Now if you shift your attention over here to Jason you're going to see very little squat move. His hips drop maybe about an inch or so, maybe a half inch. Not a giant sit move here. A lot of you would probably ask me, "Well, which one is better?" I think of the squat move as more of a graduate level move. Not that Jason Day's not ready for a graduate level move. He's balanced his golf swing out with proper width, proper leverage, and proper rotation in the golf swing. He obviously maximizes club head speed with his equation. Rory has got tons of speed throughout the golf swing. He's got good width. He's got good leverage. He's got good rotation. He's allowing himself to use a little bit more ground force in his swing. If Jason was to run out of speed at some point, which I don't foresee happening, and he wanted to add a little bit more ground force, then yeah, he might want to add a little bit more of a squat move but again it's not super imperative.

I used a big word here by talking to you guys about the big shift over to the left side. This may look like there's a lot of weight into their trail let at this point but I can assure you that there's not a lot of weight over in this trail side. I would call it probably about 30% of their weight's still in their right foot and about 70% of their weight in their left foot. Maybe even just a little bit more.

With the hips rotating, they're rotating away from the golf ball. That's moving you in the exact opposite direction. That's also a great way to be able to get the club moving at proper speed with efficiency. Here's the big key move here with the post up. I want you to pay very close attention to what both player's right legs do when they're starting to post up and release the club. Here we go, left leg is starting to straighten. As they're driving that foot into the ground they're working up. Watch this left leg on both sides. You're going to see that it starts to straighten. Right at impact it's at it's straightest point, and then the club releases.

Now, watch the right leg. See how it helps maintain the width between the knees? The club is extending out in front of their bodies and it keeps that width there long up to where the hands are almost above their chest. Then you're going to see them swivel up onto their right toe.

That's the big key move, being able to use the right side of the body as a break while the club is releasing in front of you. A lot of times we see amateur golfers tend to push off the right leg which can cause the body to spin through the hitting area. When your body is spinning through the hitting area essentially you can be delaying off your release or now you're actually not allowing the hands and the arms to act independently from the body. That means your arms and your club head are going to be working at the same rate as the rotation of your body. That's why we use the right side of the body as a break to be able to release the golf club. That is one of the most critical moves in the golf swing for producing club head speed. We want to be able to shift our weight, get on the breaks, and let the club release.

Both of these players do it extremely well. Not saying that their bodies aren't rotating. I know a lot of people have come to bat at that one but they have slowed their lower half down to the point where now they can let their club release and that's part of the kinetic chain. Any hitting or throwing sport you see the body tends to come to a stall point and then the delivery point from the throwing or hitting motion. It's a great way to be able to create efficiency in the speed department.

For those of you guys who have been struggling with this, definitely work on making sure that you shift your weight left. Use that left foot to post up by pushing that thing into the ground and then get on the breaks with that right side when you're releasing the club and you're going to see that you have tons of speed.

Okay guys, so thanks again for tuning in to this week's video. For those of you that are joining us on the website, I've got some really great premium videos that are going to help you work on your sit move into that lead side. It's actually called "Sitting Into the Left Side". We've got the "Role of the Right Foot in the Downswing" which you'll hear me talk a lot about. We've also got the "Straight Left Legged Impact". That's a video that's going to talk to you about how to get some good muscle engagement onto that left side and how to really work that left leg into that straight position so you can start to work on your release.

All of these videos that I'm mentioning are going to be to the right hand side of the video player underneath the "Recommended Videos" tab. Just click that tab. All the videos will start to populate. Also, another good video that a lot of people started to get some good success with, it's a video that I did that talked about fixing weight transfer. So I would suggest that you work on making sure that you're transferring your weight over to your lead side, then start to work on posting up and releasing the club and you will start to see a good size increase in club head speed. Get your weight transfer down, post it up, get on the breaks, and release that thing and you should be playing some of your best golf in 2016.


JOIN OUR 391,951 MEMBERS AND GET INSTANT FREE ACCESS TO DOZENS OF VIDEOS!