Learn 2 key moves you can take from the swing of 2018 U.S. Open champion, Brooks Koepka, the youngest player in golf history to win back-to-back U.S. Opens. 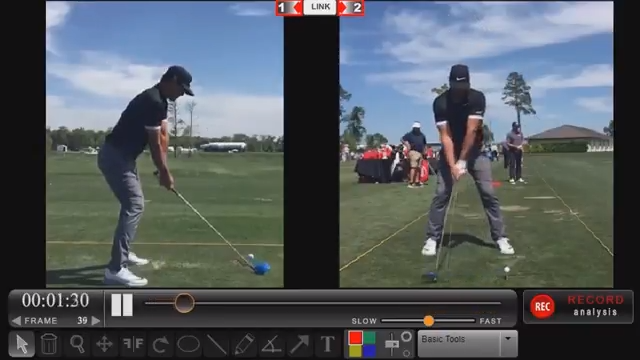 Hey, what's up everyone? Welcome back to a brand new video this week. I'm RST instructor Chris Tyler here with 2018 U.S. Open champion, Brooks Koepka, who just became the youngest player in golf history to win back to back U.S. Open Champion. So congratulations to Brooks, and in this video we are going to be doing a quick breakdown on two key components that allowed Brooks to maximize club head speed and efficiency in his golf swing.

So if you've been looking for a solution to be able to get a good dose of speed, then pay close attention to today's analysis, and at the end of the video I'm going to go ahead and show you guys a couple of quick little drills that are going to help you get well on your way to being able to hit the ball further than you ever have before. So let's go ahead and get started now.

Okay, so if you've played golf either for a short period of time or for a long period of time, it's pretty safe to say that if you're taking golf instruction you're looking for two really key things. And that's always going to be consistency and speed, right? So if you went to your golf instructor, you're going to tell them you want to be more consistent and you also want to pick up a good dose of speed, and that's obviously hard work for us instructors to be able to figure out and how to maximize those two things, and how to get them to work together.

But today we're going to be focusing on two really key aspects of Brooks golf swing, that allow him to maximize efficiency and to be able to just pound the golf ball. He's 11th in the PGA Tour in total driving distance, and these guys out there are really just pounding the golf ball these days.

And it's so funny, when I work with students privately, for some reason, in the golf swing, because we're stuck to the ground we typically want to not use weight shift to our advantage. Weight shift is a really critical aspect to any hitting or throwing motion, and I actually had a student that I worked with the other day who didn't use weight shift at all. He just used a ton of body rotation, and a ton of arm strength.

And so I had him pick up a golf ball, and I said, "Okay, now I want you to throw this golf ball down the range." And he had this really beautiful throwing motion, where he strided toward the range, he planted his foot, he pivoted his hips, which rotated the torso and then he moved his arm. And I said, "That same sort of motion is how exactly how I want you to sequence your down swing." And so what we had to do, was we had to work on loading his golf swing up in the correct order so that he would fire in the correct order. And that's what we're going to be talking about today.

So let's go ahead and focus on the down the line first here, and one of the big mistakes that a lot of golfers tend to make, is at the top of the golf swing what you're going to see is Brooks maintains flex in his right legs. So you see how he's maintained this flex right there.

Now what that's done is it's restricted the hips to about 35, maybe 40 degrees of total rotation from the hips, but if you look at it from face on, you're going to notice that he gets a very wide shoulder turn. So you're looking at probably 90 to 95 degrees of shoulder turn on about 30 to 45 degrees of hip turn. Now this is what we call separation. Now a lot of times what golfers do, is they straighten this right leg out drastically, which forces the hips to over rotate, and you get very little separation.

So what this separation is good for, is it's starting to get muscle tension. You're starting to get muscle tension signals in the correct areas of the body. Effectively, in order for you to be able to swing this golf club at 100 miles per hour, you've got to have 32 pounds of muscle available to you, right? That's a lot of muscle. And so a lot of us just don't have that available to us in our shoulders and our arms, but we do have it available to us in our biggest muscles in our body, like our biggest surface area muscles, our lats. Our chunkiest muscles, our glutes. Our abs or obliques.

So by getting yourself to create separation, you're allowing those muscles to start to get contracted, that you're going to be able to use those essentially for speed in the down swing. So before you start working on your down swing sequence, I want you to work on loading up your trail leg in your golf swing properly. So when you shift over to it, you're going to be working on keeping that right leg flexed and facing forward. Don't let this right leg rotate out, and don't let yourself lose deflection in it. Once you have that in a good spot, now it's time to start sequencing the down swing.

Now I want you to take a step back here for a second, and I want you to think about if you were to pick up a ball and you were to throw it. How would you make those movements? Well, I guarantee it you would take your lead leg, and you would start to stride towards home plate, right? You would start to step out and start to move in the direction that you're going to be throwing it. And that's what Brooks does really well here, you're going to see the first move down as you see him start to shift his hips and start to unload his body. So that movement right there is now pulling the torso around. He's not actively trying to unwind the upper body at this point. He's allowing his legs to create that downward movement.

Now at this point his hips continue to start to clear, which pulls the arms and the torso around even further. And now here we are in the hitting area, and guess what? It's time to party. It's just time to let this club release, by letting your wrist and your forearms start to rotate. This is where we stall the body, and we allow the hands and arms to act independently from the body. This is all part of the kinetic chain, this is proper sequencing.

And so a lot of times what amateur golfers tend to do, is from the top of the swing they tend to start pulling their arms down and firing really hard from the top half. And what that does, is it creates momentum and inertia working away from the target, forces you to start throwing the club out away from your body, makes it nearly impossible for you to shift your weight, and in turn you're just going to lack efficiency.

Then, as far as down swing sequence is concerned, we've got a number of videos that will help you with this, but one of the members' favorites is the Frisbee drill, because you're going to actually learn how to fire the proper sequence just by doing a simple drill just like throwing a Frisbee. And once you do enough repetitions of that, then you start adding a golf club. And you're going to start to see that you've become way more efficient, and you start pounding the golf ball like Brooks does. He's absolutely a phenomenal talent.

You can see that he unloads and just lets the club just fly through the hitting area, and that's why he's able to be 11th on the PGA Tour in driving distance.

So, that's going to be today's analysis. I really want you guys to create separation first, and then work on sequence second. And I promise you, you'll start hitting the golf ball further than you ever have before.

Learn How to Hit it DEAD Center Everytime!

Learn How to Hit it DEAD Center Everytime!


More PGA Tour Pros use the RST fundamentals than every other golf swing method combined!

"RotarySwing is the best instruction I have ever come across in my 50 years of playing golf. I have had a lot of instruction over the years but never as complete and simple to understand. I have recommended RotarySwing to several of my friends and will continue to do so. Keep up the great work."
-Jim L