Patrick Reed's golf swing is a great example of an RST Fundamentals based move. Learn how to increase your club head speed with this one simple trick. 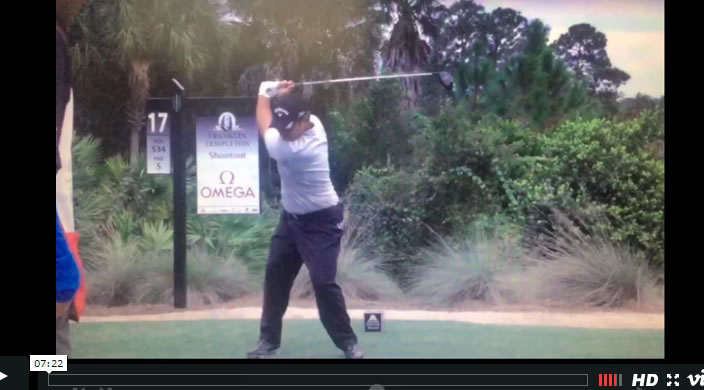 Patrick Reed was a strong performer in the 2016 Ryder Cup and with his Rotary Swing Tour Fundamentals it's easy to see why. In this golf instruction video, I analyze Patrick Reed's golf swing and show you the key component to his transition that allows him to create a lot of lag for effortless power.

Hey, Guys. Chuck Quinton here, founder of rotaryswing.com, and I want to talk about Patrick Reed's RST fundamentals. If you look at his swing, and you start to break it down like we're going to today, there's a ton of things that you can learn from his move that help personify and help you visualize more, the RST fundamentals I talk about in the five-step program. The one thing I want to talk about today is the most critical move that nearly every amateur golfer that I've ever given a lesson to in my life, and that's thousands and thousands of lessons, does this one thing wrong. Listen up, because I'm going to show you how to fix it, and you're going to able to see it in Patrick Reed's swing.

Where I'm talking about specifically is really at the top of the swing. I'm going to go back a few frames here and show a couple things. One, notice that Patrick Reed ... He has made this shift into his right glute here. His shoulders have made a big, full turn. Everything here is RST fundamentals down the middle here, but notice now, as his shoulders stop moving and his hips stop turning, he's loaded up on that right glute, and he's getting ready to go the other direction. Notice that what's really going to happen now is the only thing that's moving is the golf club. Notice that the club head keeps traveling down, keeps drooping here a little bit, but nothing else is moving.

In order for that club head to move those three or four inches there, and I'm going to put a line on it, just so we have a really good perspective of it. Club's dropping, nothing else is moving, so what would cause that? Well, there's obviously only one thing, and that's the little bit of flexion in the wrist. Now, how would the wrist be allowed to set like this?

Well, the way that most of you guys are grabbing the club out there, it won't, right? You guys tend to grab the club so tightly that when I grab your wrists in clinics and in lessons and try to move it around, it feels like you're trying to kill that poor golf club. It didn't do anything to you. Well, it probably did do something to you. It certainly deserves some punishment at times, but, generally, you want to make sure that you are not trying to kill that thing by gripping it too tightly because when you do, you don't get this drop here.

Now, this drop in itself is completely irrelevant and insignificant. What it's really doing is showing the dynamics of your golf swing and what is going to unfold as we start down, and that's why this little drop here is a critical piece, because it's showing his wrists are soft and supple and responding. He can feel the weight of the club head and respond to what the club head is doing, and swing it, instead of try and push against the shaft with the left thumb and the right wrist, which is what most people do at this point.

Notice that as he has started his hands moving back to the left, which is being done by, if I focus your attention ... I'm going to draw a little circle here. If I focus your attention right here, on his hips, this is what's moving. That's what's moving his hands. Notice that the angle created by the club shaft and his forearm here is pretty sharp. That's not exact, but you get the idea. Then, as it comes down, it actually appears to increase. Now, technically, this is because the shaft is flattening a little bit. The club is shallowing out on plane, which makes this angle look much more acute than it really is at this stage in the swing, but it is actually increasing somewhat.

The important thing is, not so much the amount that it increases, but by most people's, most amateur golfer's, position at this point in the swing, the club shaft is like this. You're already at a 90-degree angle, so you're losing half of your leverage during the first phase of the  golf downswing. When you lose it this early in the downswing, because your wrists are too tight, and you're pushing against the shaft with your left thumb, as a right-handed golfer, and your right wrist is too rigid, all bets are off. You're going to have no power, no leverage, in your swing as you come down.

Again, all of this comes down to being soft and relaxed with your wrists at the top. It's that simple. That's what creates this look of lag and leverage. You can see, in this swing, he's got a tremendous amount of leverage, but he didn't try and manipulate and create this position. This happened as a byproduct of him moving his lower body correctly, which, if I can focus your attention back on his belt buckle. Notice how much his belt buckle is moving as he's shifting back to the left, when his hands are moving down, getting pulled down by his body, and his wrists are nice and relaxed. As that happens, he's got a ton of lag, ton of lag, ton of lag, and now, because he didn't try and do anything to create that lag, he'll have a much easier time releasing it. He doesn't have to do anything special to manipulate the club into impact. Notice, his hands are actually really, really quiet.

If you look closely at his right hand, it's barely even on the club. You can tell that if you zoom in a little bit ... Oh, let me get rid of that for a second. Zoom in on Patrick Reed's right thumb. This is one of the areas I always look at in people's golf swing. Notice the angle formed by his thumb and forefinger is going up his forearm. In many, if not most, golfer's swings, their right thumb and forefinger line is actually pointing over here. It's because they're twisting their right hand in this direction, in a desperate effort to square the club face.

When you do that, all of a sudden, you're putting a lot of timing into your swing, trying to square the face. His hands are super quiet. Look at his right hand, it's almost coming off, hence the Vijay release drill. You can see he's not pushing against the shaft with his thumb and forefinger. If you look at your swing right now, you'll probably see that this thumb, or this forefinger, is pushing against the shaft really hard. His hands are essentially just passive clamps on the club. They're barely holding on and just rotating. If you look at his logo of his glove, rotating, rotating, rotating, hands are soft.

All of that, all of this great release and great impact position, and tons of speed was all started right here. If your hands and wrists are soft at the top, you have a chance to have tons of lag. If they're rigid and tight, and you're not allowing for this little club head to fall here [inaudible 00:06:06] ... Focus just on this area here. Watch this club head, soft and relaxed, soft and relaxed. As it starts to move, as his body starts to unwind, that's what's pulling the club back through.

If you look at the RST five-step golf swing learning system, and you look at step four, when we start adding the club back in, that's where I want you to really start paying attention to what's going on right here in your swing. When your wrists and hands are relaxed at the top of the swing, and there's no tension in them, all of the good things that you want to happen in your swing, the club shallowing out, the club face staying square, you're creating tons of lag, having a natural downcock, all of that stuff starts to happen automatically for you. You don't have to, nor do you want to, try and manipulate and create this position.

RST five-step, look at video four, step four, and start understanding how and start working on keeping your hands really, really soft. Take that thumb of the club and, all of a sudden, if you take your left thumb off the club, if you're a right-handed golfer, and start making soft swings, just holding onto the club with your left hand, and video it. It's not going to do you any good if you're not seeing what you're doing, so video this with your phone and look at it, and watch what happens. I promise you, you're going to start looking like this in no time at all.