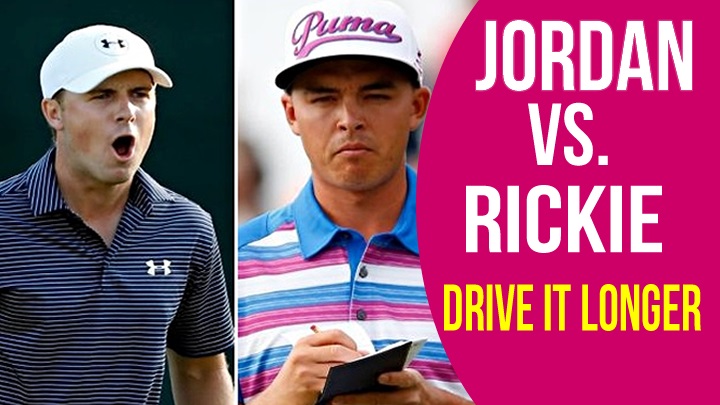 This weeks tour analysis we've got Jordan Spieth back in the winning circle again who just won the playoff at John Deere, so congratulations to Jordan who's in domination mode this season. Also, Ricky Fowler picked up a big win over at the Scottish open so we're going to be doing both players here the same this week. We're going to show you guys some of the goods and the bads of these particular moves and also give you some related videos that are going to help you not only become really efficient with your golf swing but really safe. So let's go ahead and get started.

All right guys, so here we are with this weeks tour analysis. We're going to be talking about a couple of face on driver swings from both Jordan and Ricky. I know that Ricky has gone through a pretty good sized swing change over the last couple seasons and he's done a really good job with being able to protect his back and that was one of the things that Ricky was getting a little bit concerned about is how he didn't load into his right side properly which allowed his spine to lean more towards the target at the top of the swing.

You're going to see a much different look now from Ricky here. We're going to get both players loaded up to the top so you can see, that both players have been able to maintain axis tilt here really well at the top of the swing. If you're unfamiliar with what axis tilt really is, we've got several videos on axis tilt on the website. It's very very important.

If you've noticed that your spine at top of your golf swing is leaning more towards the target that can actually compress your lower vertebrae, and can start to put a lot of tension down there and that's not what we want to do. We want to be able to protect the body, ultimately.

So, axis tilt is a big area of the golf swing that a lot of people try to over look and it starts right from a good set up position and being able to rotate around your axis properly. You need to also be able to make sure you're shifting your weight into your trail side. Now, this is where the big difference in both these golf swings kind of come in and I actually tend to like Ricky's downward move here a little better than I do Jordan. Even though Jordan's got the lowest scoring average on tour, he's the number one putter on the planet right now. I just like Ricky's impact position because he's a little bit more safe with his lead side here.

I'm going to go ahead and explain that to you. So as we start to work in transition here, I'm going to go ahead and draw some lines up in the center of the lead ankle here on both players. This is where they're getting ready to start their downward move here. They're going to make a big shift into their lead side. Now if you watch Ricky here in his downward move, he makes a much bigger shift of his hips over to the lead side here. Okay and he tends to stand a little bit bow legged at the address position where he's knees kind of flare out and he stands with his feet kind of bowed outward as well.

From this appearance right here, it's going to look like he's a little out past neutral here but he's made a pretty good sized shift into that lead side. You can actually see the weight starting to come off the right foot here. Now with Jordan, it's a much different move so you're going to see him start to get- unwinding over here.

Okay and you can see that his shift was much less than what Ricky's was 'cause you can see the center of his hip sockets quite a bit further back, all right where their arms are in virtually the same position here. They're both almost parallel to the ground, actually back. Jordan up just a fraction here but what the big difference here is that aside from the weight shift, over to the lead side, you can see that there's quite a bit more weight down here in Jordan's right foot that he could use to push up off of. That's of one of his signature style moves in his golf swing is that he pushes really hard from his right leg and you're going to see that pretty closely here through these next few frames that he's going to push really hard.

Now watch his lead ankle as he's starting to drive. Okay, see how he's starting to roll to the outside part of that lead ankle. Now think about this, we're swinging the golf club effectively over 115 miles an hour. That golf club becomes very heavy, so this can actually start to put a lot of stress on those outer portion of those ligaments out there on the outer portion of the ankle and also can cause your spine to lean back away from the target even more, through the hitting area which in turn, created a lot of secondary axis tilt. That can also start to compress the lower vertebrae and this is more what I would consider a dangerous impact position.

Even though he's a fantastic, his ball striking is coming around, he's a fantastic driver and the golf ball hits a ton of fairways, you got to remember tour players, 81% of tour players will sustain a golf related injury that keeps them out of golf for eight weeks or more throughout their careers so we want to be able to do our best to be able to protect and preserve the body.

All right, so now I'm here with Ricky, if you watch through these next couple frames, okay you're going to see that his left leg moves to a pretty straight position here. Okay, you can see a much more stacked up lead side appearance here. This is where you can see this nice stable left foot. This is a much better impact position for being able to protect the body. Ultimately, Ricky hits it a little bit further than Jordan, it's got a little bit higher club head speed here. He's been able to use the kinematic sequence and also being able to protect his lead side now which is going to be critical for him as he starts to move forward and play this game for several years to come.

All right guys, so if you've been struggling, if you noticed that you'd been working to roll to the outside part of your lead foot too early in your golf swing, chances are you're not getting enough weight over to lead side early enough so you need to work on your weight shift quite a bit. So that's a big big thing for you guys all at home. If you've noticed yourself on camera either kind of hanging back in the hitting area or you rolled to the outside part of that lead foot, then we need to work on getting more weight shift into your lead side much sooner.

You're also going to check out the Straight Left Legged Impact video. You're also going to check out the Perfecting Lower Body Stability. All right and I'll put in a couple of Axis Tilt videos over here as well just in case you guys are unclear as to what that means. Make sure you have Axis Tilt at your address position and make sure you're rotating to the top of your swing properly so you're setting yourself up for work, in transition properly.

All right guys so that's our review this week. Again congratulations to both players. Jordan is in domination mode. Ricky, it's good to see him win over there and I'm looking for an exciting British open and I'm hoping you guys are as well. Now let's make it a great...


JOIN OUR 389,922 MEMBERS AND GET INSTANT FREE ACCESS TO DOZENS OF VIDEOS!

"I'm hitting the ball further now at 63 than I did at 33! Rotary Swing literally changed my life!" -David C.

All for LESS THAN A SLEEVE OF BALLS!