Justin Rose - Rotate and Stack Up

Justin Rose - Rotate and Stack Up

Congrats to Justin Rose on his amazing Sunday finish and claiming his 7th career title on the PGA Tour. Justin has a fantastic golf swing and is known as a great ball striker. In this video, I'll show you 2 key moves in his golf swing that can help you get into a more solid impact position every single swing. I'll show you a couple of cool drills that will help you rotate and maintain your spine angle throughout your swing and I'll also show you a perfect way to get properly shifted into your lead side. If you are struggling with mishit shots round after round, then you need to pay close attention to these 2 moves guaranteeing you solid contact just like the pros. 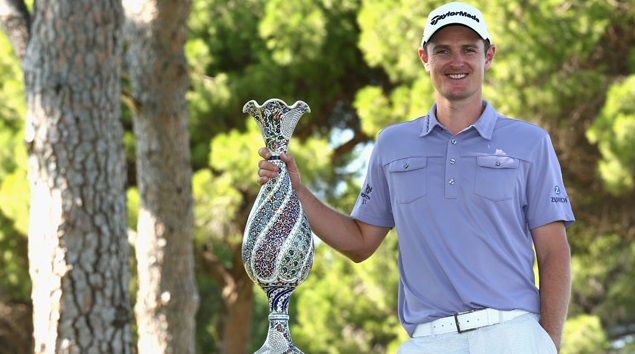 We are back with this week's tour analysis with Justin Rose who shot a final round 66 at The Zurich yesterday, so congrats to Justin on a job well done. This week we're going to be focusing in on two ares that are going to help you become a better and more consistent ball striker. So it's going to have to do with how we rotate our golf swing and the way we stack up our lead side to the hitting area. So let's go ahead and get started.

Okay guys, so as I said in the opener, we're going to be focusing in on two awesome areas of Justin's golf swing. We could probably focus in on about a hundred areas of his swing because he's got a very, very good move on it, for sure. In the interesting of time, we're going to be focusing in on two areas and that's going to be maintaining spine angle throughout the entire golf swing and then also a great way to get into a more stacked up, lead side, impact position so that you can control the bottom of the swing arc and have much more solid contact on the golf ball. So let's go ahead and get started here.

We're going to focus in on the down the line version first. I'm going to draw some lines here for us. Lines that I'm sure you're familiar with seeing. You're going to see a line down his spine. Go ahead and draw the tush line too, just for good measure here because we know that when the hips come forward, that in turn can make your spine angle change. As we start to work through the golf swing here into the top of the back swing, hands are just a little bit deeper than we would teach here at RST, but not a big deal. You can see here that he's maintained the angle of his spine all the way to the top of the swing here and you can also see that his shoulder line is now perpendicular to the original spine angle that we had drawn from the starting position.

So if you've noticed this, if you're watching yourself in the self-analyzer on the website, definitely take a look to make sure that your shoulder line is making a perpendicular, "T," to your spine angle to the top and if it's not, then you need to work on eliminating the golf club for a bit and learn how to rotate your shoulders around your axis to be able to maintain that angle. If you're starting to push from your lead side, you'll probably see your shoulders start to level off a little bit. If you try to pull your right shoulder too vertical, you'll see that you'll actually increase the total amount of spine angle that you have or you'll actually start to run into a little bit of a reverse pivot situation.

A good way to overcome that would be, "The Necktie Drill." We've got that on the website here. That'll be on one of the recommended videos. So as I go through these analyses, I start to recommend a lot of the content that we have available for you guys. So if you pinpoint some areas that you want to work on in your golf swing, then this is a great way to kind of go in order.

So you'll see again we're focusing in on maintaining spine angle all the way to the top of the golf swing and we did that by rotating our shoulders around the axis. We kept our hips back. So that is a beautiful, beautiful move up to the top and now from a face on perspective, this is one of the big cruxes of the golf swing and if you look ... I'm going to go ahead and put a line up from the center of the lead ankle, at the address position and we're going to go ahead and load him up to the top of his swing.

Okay so you can see he doesn't get as much of a shift over to the right side as we would normally see from a RST fundamental move, but he still gets a load into that right side. This is where his big move happens. If you pay close attention to the center of the hip socket here, and you also pay close attention to the way his torso moves with the shift. This is an area where a lot of golfers will try to hold their head dead-still and they try to hold the torso still as well while they're making this big sitting move left, and then in turn, that causes a lot of your mass to stay back behind the golf ball and then we run into a mess of issues as far as ball strike is concerned.

That's where you can either bounce the club off the ground into the ball, you can hit a lot of thin shots because you're starting more of an ascending blow than a descending blow. So now pay very close attention here through these next few frames, how when he makes this big shift for his lower half, he's going to allow his torso to get over into that lead side as well. So it's almost like he's kind of falling into the lead side. Okay, so you see that there's some space there and then he's kind of falling with the torso. He's not trying to keep everything hung back. This is a great example of how to get your body into the proper position to start to post up. Post up is really just a matter of you driving your lead heel into the ground, clearing the hips out, stabilizing the lower body and then just releasing the golf club. That's really kind of what we mean when we have that terminology, is posting up.

So you can see that he's shifted over into that lead side and now he's going to be getting his post up move and then he just gets into a phenomenal impact position. Maybe just a little out past neutral to where his lead knee is just a little out past there. He could be trying to hit a cut here. You know golf pros are always trying to shape the golf ball, so you'll see the tendency is to get yourself a fraction out in front of it when they're trying to hit that kind of shot.

Alright guys, so if you've been struggling with rotation or getting yourself into a really good solid impact position in the hitting area, where you notice you've hung your torso back or if you've felt like you can't get this stacked up, lead side here, a couple of videos I want you to take a look at again, in order I would say, "The Necktie Drill," and then, "Five Minutes to Master Rotation," if you haven't worked on being able to rotate around your axis properly. Then I would also say, "Level Shoulders at Impact," another great video for you to understand how we want the shoulders to be, down in the hitting area so they can get really solid, crisp contact. "Sitting in the Left Side," that's going to teach you to get in transition and then, "Taking a Divot In Front of the Ball." It's not in the video we mentioned a lot, but there's a lot of good substance in there that you may want to take a look at.

So that's going to be it. If you guys want to really work on maintaining or not maintaining, but if you want to become a good, consistent ball striker, then this is an awesome move to kind of mirror yourself out after, in so many levels, and obviously maintaining spine angle, keeping the hips back. You see that he maintains the spine angle well through the hitting area. Keeps his hips back and then also he's got a great transition to where he's allowing the left side to really get stacked up. Then he's going to get solid, solid contact. So that's it. That's definitely a good way to do it. Alright guys, so I wish you all the best and let's get out there and play some great golf.

Get Your Free Membership to Finish Watching "Justin Rose - Rotate and Stack Up" Right Now!

Get Your Free Membership to Finish Watching "Justin Rose - Rotate and Stack Up" Right Now!