In this video, I'll show you how Justin Rose uses his right foot to get into a perfect impact position. The right foot can play a dynamic role in the golf swing and by learning how to use it properly in the hitting area, you will become more consistent and still maintain the power in your golf swing. 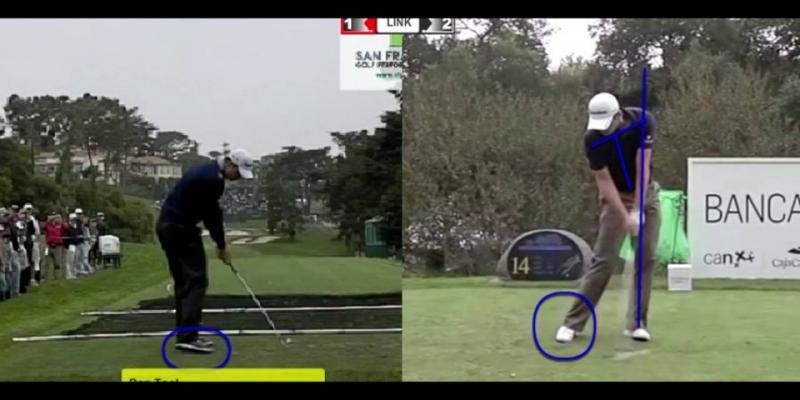 Hello, RST swing instructor Craig Morrow and today we're going to be taking a look at Justin Rose and how he uses his right foot correctly to get into a good impact position. First off, congratulations to Justin for his win in this past week's Quicken Loans National. Today I just want to talk to you all about a couple positions that Justin gets into down at impact and how he uses the right foot properly into getting there. There's a lot of things that Justin does that are RST principles that we teach, which has allowed him to log six top tens, one win and make over $3,000,000 on tour this year. So let me talk to you all about a couple of things that he gets into, or a couple of the good positions that he gets into and how he uses that right foot properly because the right foot is something that our members or students often overlook as to the importance of it, into getting into a good impact position.

If you take a look at Justin on the right side of your screen from the face on view, is that from the top Justin does a great job of getting stacked on that left side. You can see down at impact that everything is pretty much in line with his left ankle joint. His left knee, left hip, are just a touch outside of that but this is pretty much ideal and what we preach on a day in, day out basis here at rotaryswing.com. You can also take note that the right shoulder's working barely beneath the left and that Justin doesn't have too much secondary access tilt. You can also notice that his right foot isn't off the ground too soon, that it's rolling more off the instep instead of pushing off the toes. The lines and circles that I have on the screen right here is why Justin's been so consistent this year, is this is pretty much a can't miss position.

He's not doing anything that's going to prevent him from not playing on the course due to injury but from this position he's going to be able to control the flight of his ball, the shape of his ball and get a nice consistent strike every time. If you take a look at his swing from the down the line view on the left hand side, coming down onto the ball, what I want you all to watch is his right foot. You'll notice that coming down that his heel doesn't come off the ground too soon, which is meaning that he's keeping his glutes engaged, that he's not tending to engage the quads on the downswing. If that he were coming off the ground too soon and that he were pushing off his toes, that would mean that his glutes were becoming disengaged. Our glutes are going to be our hip stabilizers in our downswing and also making sure that we transfer our weight efficiently.

This is one position that allows him to achieve where his shoulders are over here on the face on view down at impact, that they're relatively level and he doesn't have too much secondary access tilt. If he were to allow his right foot or heel to come off the ground too soon and be pushing off his toes, what would happen is that he would change his access tilt at impact because everything in the golf swing is based on counterbalancing. So, if he picked up the foot too soon, what would happen is that the lower body would start to push too soon towards the target and start to push beyond neutral joint alignment, which would make his upper body start to hang back. If his upper body started to hang back, instead of getting in this position, or he lacks too much secondary access tilt, or the right shoulder's working barely beneath the left, he would be more here, where the secondary access tilt would be more on the red line and the right shoulder would be here and the left shoulder would be here.

That position right there would be putting undue stress on his lumbar spine. He'd be putting undue stress on his left hip, his left knee, and he had also be timing a flip down at the bottom because he would be coming too much underneath the shot and with all the good things that he does coming down, he would tend to use too much of his right side in squaring up the club face. For what we know we want to make sure that we're using our left side to square up the club face. The right arm, all he's doing is adding speed on the downswing, we don't want him controlling too much of that club face coming down into the strike. If he were to allow that right foot to come up too soon or the heel to come up too soon, it would tend to cause his upper body to lag behind, add too much secondary access tilt, which would put too much undue stress on his lower lumbar spine but also tend to him to want to flip at it with that right hand coming into impact, which would lead him into being inconsistent and not making $3,000,000 on tour this year.

So, if you want to get into a good fundamentally sound impact position or hit these positions that Justin does down at impact, you have to use the right foot correctly. You don't want the heel coming up off the ground too soon or be pushing off the toes or engaging the quads because all it's going to do is lead to injuries and inconsistencies down at impact. So, if you want to get into this position and go make $3,000,000 on tour, what you need to do is you need to go check out the video of the roll of the right foot and in this video Chuck's going to talk to you about how we're going to roll off the instep and we're not going to pick up off that heel too soon and start to engage the quads or push off the toes, which is going to tend to lead to too much secondary access tilt and getting the lower body out racing the upper and wanting to flip at it with the right hand versus properly releasing it with the left hand.