Congrats to the world #1 player Rory Mcilroy for his win at the Dubai Desert Classic and Brooks Koepka on his first official PGA Tour win at the Waste Management Open. Both of these young guns rip the ball off the tee. In this new video, I'll show you how they preserve lag in the downswing. I'll also show you where they start to release the club for maximum speed at impact. Amateur golfers tend to work way too hard in the golf swing and lose speed before impact. This video will show you how to put the effortless power and speed back into your game. It's time to prioritize your downswing, preserve lag and release the club when it matters most! 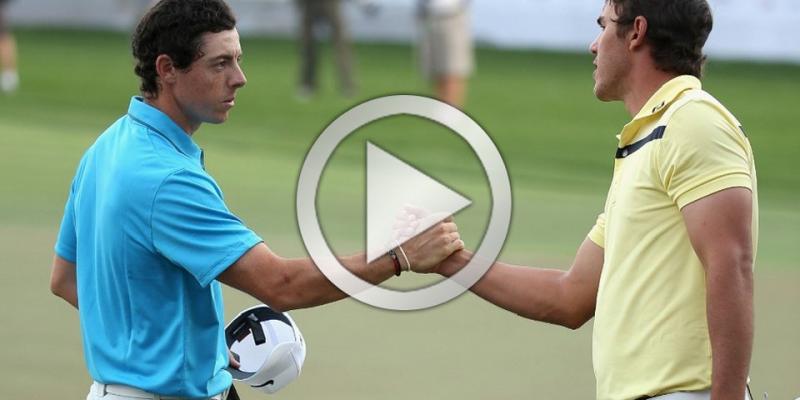 This week I'm going to show you how two of the Tour's young guns, Brooks Koepka and Rory McIlroy, preserve a ton of lag in their golf swing by properly prioritizing their move by using the body first and then the arms last to put a lot of club head speed in their games. Let's go ahead and get started.

Okay guys, as I said in the opener, we're gonna be focusing in on the young Brooks Koepka, who just won at the Waste Management this past weekend, and Rory McIlroy, the world's number one player just picked up another victory, so congratulations to both these guys. I'm gonna show you guys a couple of really cool, common things that these guys have in their golf swings that allow them to bomb the golf ball off the tee. And it's a good way for you to get a good idea on how you're going to be able to preserve lag as you move forward and put a lot of speed where it matters the most, and that's at impact.

One of the things that we want to really try to focus in on is that 60% of a tour player's club head speed is increased 3 feet prior to the golf ball, so we are at max speed right at impact. And it's done by preserving lag, not doing much for the hands and arms, really properly sequencing a golf swing much like we talked about in the Bill Haas video and once you have a preserved amount of lag then releasing it at the proper time.

So let's go ahead and take a look here. So we're going to focus in on a couple of really critical areas here. I'm gonna mark about 3 feet prior to the golf ball here, so we have a good idea on both sides. I'm gonna draw an arrow this is really where we want the club head speed to start to release and maximize, so we are at max speed right at impact. And I'm also going to draw a line across the hips of both players here, and you're going to see that this is a good line for you guys when you're self-analyzing your swings, you're gonna look for a couple of these moves in your own game. And, you know, a lot of times we just, as amateur golfers, we just do way too much with the hands and the arms.

So let's go ahead and get both players loaded up here up to the top of their swings. Okay, I'm going to get Rory right up to the top, get Brooks right up there as well. I'm gonna mark their hand positions here so you can see that they have very similar hand positions, as far as width is concerned. Brooks has got a little more set in his wrists there, so he's got the club shaft parallel to the ground where Rory is just shy of parallel.

Now, these next moves are the real key ones in order to be able to preserve lag, is to be able to get this sharp angle that everybody comes to the set looking for, they all want this massive angle. And a lot of people try to pull their arms down in front of their body when in turn, we really want to start with the lower half, really starting to sit to that lead side, and start to create some of that torso rotation, much like we talked about in the Bill Haas video last week.

So you're going to see from this particular position, as I'm going to start to work from the top of the swing down into about the hip-high range. All right, let me get down into the hip-high range, both players. All right, so you're going to see right at about hip-high, it might be just a frame or two below. But notice here that the hands and arms, the hands especially have dropped straight down. Okay, and what's moved them into this position is rotation. So we've allowed the lower body to start to shift left and allowed ourselves to have a little bit of torso rotation, which has in turn allowed the hands and arms with a little bit of gravity to move down into this position. Now this is where the golf swing, we're going to start to get things prepared to release the golf club.

So now the hands are back over to about a hip-high range, and very similar looking move here for Rory. So now you can see the hands are back up at that hip-high range, golf club is fully extended out in front of him. So what they've done is they've preserved lag by getting the lower body to start the golf swing. Then they've allowed the hands and arms to kind of move down into the correct area to where they've really fine-tuned their release. And if you look the one commonality between a lot of the tour players is that they all know how to control the hitting area.

Being able to control the hitting area is a very critical part of golf, and then also having a really finely-tuned release. So you can have a lot of lag in your golf swing if you properly prioritize and that's going to be one of the big things that you need to understand is that the lower body needs to start, then you can create some posting move over in the lead side, and then create a little bit of torso rotation, and just allow gravity to move the hands and arms down into a spot where we're going to release it and you'll have a lot of speed at impact just like these young guns.

Okay guys, so a couple of good videos that I want you to check out this week. "The Key to Creating Lag," great video. Another great video is going to be that "Wide, Narrow, Wide Swing Shape." That's a great video that's going to help you understand how we're going to want to keep our width very early on which will allow us to narrow the arc and then allow us to get a lot of extension through the hitting area like both these players. And then another great video that Chuck did is this "Reshaping Your Swing for Lag," and all three of these videos are going to give you a clear idea of what we want to try to do to get these great-looking positions so we have a lot of speed.

All right guys, so let's get out there, let's do less with the hands and the arms early on the swing, let's prioritize by getting that lower body moving, and let's play some great golf. I wish y'all the best, now make it a great day.