Rory Mcilroy Syncing Up For Consistency

Rory Mcilroy Syncing Up For Consistency

Rory Mcilroy has taken back over the world #1 ranking in golf. In this video, I'll show you how he keeps his hands and arms in sync with the rest of his body during the entire golf swing, for amazing consistency and awesome ball striking. 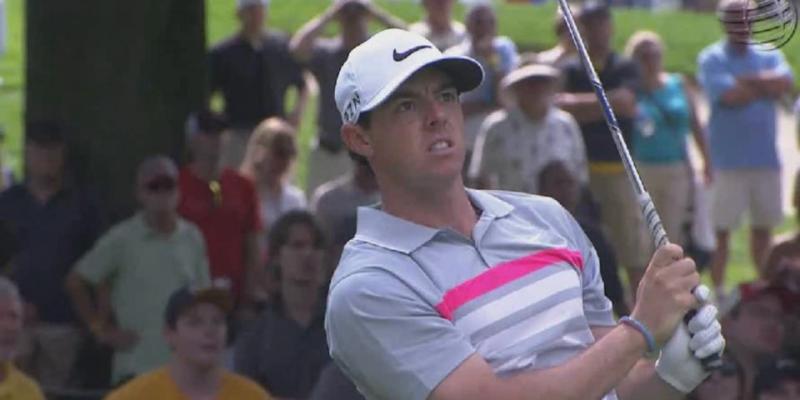 Rory McIlroy has taken the word consistency into a whole 'nother dimension. This week, I'm gonna be focusing on how he keeps his golf swing so synced up with his hands and his arms, and what they're doing throughout the entire golf swing so you can learn how to play more consistent golf.

Let's go ahead and get started.

Well we are certainly getting to spend a lot of time talking about Rory McIlroy's golf swing as of late. Seems like, as I said in the opener, that we just got to talk about him winning the British Open, and here he is two weeks later winning the Firestone and putting himself back into the number one player in the world at 25 years old, so congratulations to Rory on that.

Now, I know a lot of the videos that we've talked about with Rory has always been built around power and speed. This week I want to talk to you about what he does in his golf swing that also leads him to a lot of consistency. That's one of those things that people come to the website for is they want to become a little bit more of a consistent player. When we have people who come in town for the clinics that Chuck conducts, the first and only thing that we hear that's common from all the people that are in the room is that they want to become more consistent. I'm gonna show you exactly what he does really, really well to keep things synced up and we're gonna shift the focus off of power and speed at this point and we're gonna really just kinda hone in on the idea that we're gonna become consistent players and we're gonna focus on the 9 to 3 section.

So what I want you to do is I'm gonna focus on the face on view first, and you're gonna see here at the nine o'clock position. What he's done is the hands and arms have done very little to this point, okay? The hands and arms are basically just hanging on to the golf club and they're helping establish within the golf swing.

All right, so here we are at the nine o'clock position both face on and down the line. And you're gonna see that his shoulders have rotated 45 degrees and that both arms have stayed very straight into this turn. Now that's absolutely pivotal for you people that are working on takeaway that have a problem with getting the club stuck inside or you get the hands and arms to really start the golf club back. One of the key checkpoints you want to look for is that the center of the chest is in line with the club head, all right? In line with the hands and then in line with the club head at the completed part of the takeaway. So you can see he's done just that.

What I try to get my students to do is feel like you're rotating the buttons on your golf shirt at the same rate as your club head through the takeaway. Keep both arms nice and straight. They're not really doing anything, just hanging on to the golf club. So that's a good checkpoint for you guys when you're out there in the range. Try to keep that club head rotating at the same rate as your buttons through the takeaway and keep both arms straight, and you'll stay nice and wide, and you'll stay in sync.

All right, so from there, from this point as he starts to work, this is where the hands and arms start to do a little bit, okay? His right arm is actually gonna add a little bit of flexion and a little bit of elevation, which is helping give the golf club lift, which in turn he's gonna be able to use for speed later on in the golf swing.

Okay, so his arms have really not done much up to this point. Throughout the takeaway all they did was help establish width and all they've done is just add a little bit of right arm flexion to help move the golf club into the vertical plane. Now what do they do in the down swing? Again, they're not gonna do much, okay? So you're gonna notice over here on the down the line perspective those hands and arms are just a fraction deep in relation to his right shoulder. A lot of players get the hands above the right shoulder.

We need to be able to get these hands and arms back out in front. And how do we do that? We are gonna use the left side of the body when we create torso rotation that is what's actually gonna move the hands and arms back out in front. We're also gonna allow gravity to let the hands and arms to start to fall back below the nine o'clock region or down into that nine o'clock region so that we can release. A lot of players are trying to figure out how to sequence golf swings and they're trying to use their arms to get back into the hitting area as much as they can and you're going to struggle with consistency because now you're developing a lot of timing in the move. What Rory's done is he's used more of his body to move the golf club to the top part of the golf swing and just a little arm movement. That's the whole mantra behind the rotary swing is big body turn, small arm movements.

Let's go ahead and start down here. You're gonna see as he starts the golf club down he's not really doing much of anything with the hands and the arms. They're really just kind of falling and they're moving back out in front of the body by creating that rotation from the lead sides. He's gotten seated into his left side and he's using those left obliques right in here to start to pull that hip away from the tart.

Now as a chain reaction of events, what's happening is that's creating torso rotation and that's moving the hands and arms back out in front and getting him set up for the release part of the golf swing. Now as the hands and arms are back down into the nine o'clock region, he's been able to maintain his lag. You can see both face on and down the line at this point. Like I said, the hands and arms have not done much. All they've done is just allowed gravity to pull them down to the ground, and rotation has moved them back out in front.

This is what's going on. This is what really good, solid, fundamental players do is that they don't allow the hands and arms to do much. You want the hands and arms to do very little until the release. We have that great video that you're always going to hear me talk about that's five minutes to a perfect release. That's a video that teaches you how to release the golf club through the hitting air. There's another great video and a great drill on the website called the 9-3 video. That's really where a lot of golf or a lot of consistent golf is made. If you go and focus on that particular drill alone, the 9-3 drill, you're gonna be able to have a clear understanding of what the hands and arms are doing through the hitting area.

Then what I want you do to is kind of work backwards, all right? Then go over to takeaway and make sure that your hands and arms aren't doing much into the nine o'clock region. Then make sure you get your back swing really kind of fine tuned, that you move the club up into the vertical plane by just adding a little bit of right arm flexion, all right? Then allow the hands and arms not to do much to get back down to the nine o'clock region. Now after you've trained the 9-3, you're back down into that area and you can go ahead and just release it through the hitting area properly, and you're gonna be on top of your golf shot and playing a lot of consistent golf. So that's the name of the game is that if you want consistency, focus in on the 9-3 area because that's where the hands and arms are getting through the hitting area and that's where you're gonna be able to lead to some great ball striking.

All right guys so that's the review for this week. Get things synced up and get out there and play some great golf. I look forward to working more with you guys in the future and I hope you have a great day.

Get Your Free Membership to Finish Watching "Rory Mcilroy Syncing Up For Consistency" Right Now!

Get Your Free Membership to Finish Watching "Rory Mcilroy Syncing Up For Consistency" Right Now!