In this new video, I'll show you how Sang-Moon Bae uses his hips for a ton of lag in his golf swing. I'll also show you how to use your arms way less in your downswing sequence so that you can stop working so hard and put more speed in your swing than ever before. 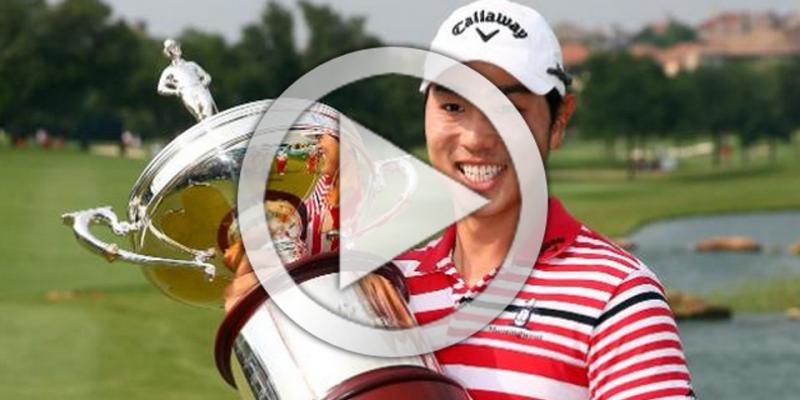 This week, Sang-Moon Bae gets his second win on the PGA Tour at the Frys Open. I'm gonna show you how he uses his lower body to sequence up his downswing, and he gets a lot more lag by using the hips. You're gonna be able to put this to use and have more speed than you ever had before.

I think one of the more common mistakes that we see among all the amateur golfers (whether you're a 2 handicap, a 10 handicap, a 30 handicap), is that we're just trying to do way too much with the hands and the arms way too early on in the golf swing, and that in turn runs into a mess of sequencing problems, and doesn't allow you to be able to pull the proper power and move it up the kinetic chain and then fine tune it through the release.

So, essentially what we're trying to do is we want to get things really started in the downward move with the lower half unwinding. We want to make sure that it's sitting left. We want to start to unwind those hips and then eventually what we're gonna be doing is we're gonna be decelerating or stalling em' and moving the power up the chain and then delivering it through the release. You know, tour players keep the golf club moving very, very slowly throughout the takeaway, throughout the backswing, and then 3 feet prior to the golf ball it speeds up nearly 60% to where they're delivering max speed at impact. That's one of the more common things that you'll see amongst all tour players is that then, in the modern day golf swing is that they really learned how to stall their body properly and make a lot of efficient speed down their by releasing it at the right time.

And so, this week we're gonna be focusing on Sang-Moon's golf swing and how he sequences his downswing beautifully. He's got really kind of a textbook downswing transition. So, that's gonna be our focus point.

So, we're gonna get both players up to the top here, both down the line and face on. You're gonna see from a down the line perspective, he's got about 95 degrees of right arm flexion right here. Good loaded up right side. He's made a very wide turn with his shoulders from a face on perspective. But one of the really big common things is, that players will try to do is they'll try to pull their arms down in front of them, before they get seated left. Now, the hands and arms will move out in front of you if you rotate your torso and you're properly seated left. So if you shift your hips left, and you were to try to hold your hands and arms up in the vertical plane, up in this really tall position, and then you were to start to try to pull your left hip away from the target, you would notice that the hands and arms are now moving out in front of you, and they're being pulled down closer into the hitting area.

So I challenge you guys to all try that. So you know, without a golf club, go ahead and you know, go through the elevation and the right arm flexion. Get yourself into a good position at the top and then shift left and then start to pull your left hip away from the target with your lead side obliques and notice what the hands and arms do. You can't ... it's impossible to leave them up in that put position if you're doing this thing.

If you're doing this properly, you would see that you don't have to do much with the hands and the arms, you don't have to have to pull them down. And what that's doing is it's allowing things to really kind of unload and keeping the arms in a passive state. So more or less, if you watch here from a down the line perspective, you're gonna see he starts to sit left so you can see those hips really start to unwind. They're already at square. And then he's gonna start to pull that left hip open.

Now you can see here that he's been able to maintain that original angle that he had at the top part of his golf swing. So you can see he's still got 90 degrees or so of right arm flexion and he's actually got probably one more frame and he still has a good amount of right arm flexion here, so you can see. He's got right around 90 degrees still at this point, maybe a little less than that. But this is the point where the hips are starting to stall, and he's starting to release the golf club. So same kind of thing from a face on perspective. You're gonna see a good sitting move left from the hips here. You're gonna see a good sit. You can see those hips starting to unwind. He's not doing anything with the hands and the arms, he's still being able to maintain the angle that he originally had up in the top part of the golf swing there, and he's gonna continue to pull that left hip out of the way. So you can see that left hip starting to pull out of the way.

And now from this particular perspective, from a face on, if you watch the pockets on his pants here, okay? You can see that they come to a virtual stalling point here. So you can see there is very little rotation at all. Now he's releasing that angle and extending through the hitting area. So that's exactly what we're looking for. We don't want the hands and the arms doing much of anything until we get down to the release point. Yeah, gravity's gonna help him a little bit and then you know, the torso rotation, that's gonna help him move him down in there. And then you just go ahead and release it and you'll be at max speed right where it counts, and that's at impact.

So you know, kind of expanding on that is if we're trying to really get the ... the arms can go really fast and if we're trying to really pull them down, they can outrace the lower half really easily, and that can run into a lot of ball striking issues where you can either hit things fat, the club can come in really steep, you know you can outrace the lower body to a point where you start hitting a lot of fat or thin shots. So you've gotta make sure that you're really trying to keep the arms still or trying to keep them put. Make sure that you're sitting left, driving that left heel in the ground to make sure that you're stabilizing with those left glute muscles, and then using that left oblique to start to pull that hip away from the target. That'll help get the hands and arms down into the hitting area where you go ahead and just release it and you'll rip the cover off the golf ball.

So that's what Sang-Moon does so well as you'll see a lot of the tour players out there, they do have a really good downswing sequence and then they have a great release.

So there's a couple of good videos on the website I want you guys to check out that's gonna really kind of go further into some of the details. There's a video that Chuck did that's called "The Hip Speed and Hand Speed" video. That's in the "Advanced Downswing" section. It's where Chuck actually visited the TaylorMade Institute and he was able to get a lot of great data. It's a fantastic video so I encourage you guys all to check that out. And there's also a transition drill over there in that same section and then the "Role of the Right Foot" that's gonna teach you how the right foot can act as a breaking mechanism to the hips so you can stall those properly and then release it.

And as always, you know when we do these tour analysis, you're gonna hear us talk a little bit ... a lot about five minutes to a perfect release because that's one of the really common areas that some of the best players, all the best players in the world share is that they have good control of the club face and they have proper release in the hitting area. So always check those videos out.

Let's get your downswing sequence by getting that lower body really working. Make sure you try to keep those hands and arms very quiet until you're ready to release it and you'll get out there and blow it past your friends.

All right guys. I wish you all the best. Let's get out there and play some great golf and we will talk to you soon.


JOIN OUR 389,859 MEMBERS AND GET INSTANT FREE ACCESS TO DOZENS OF VIDEOS!