This video was shot on 12/3/2014 at the Tiger Woods Hero Challenge at Isleworth during the practice round. It shows some of the changes that Tiger maybe working on with Chris Como and discusses how they will effect his swing. 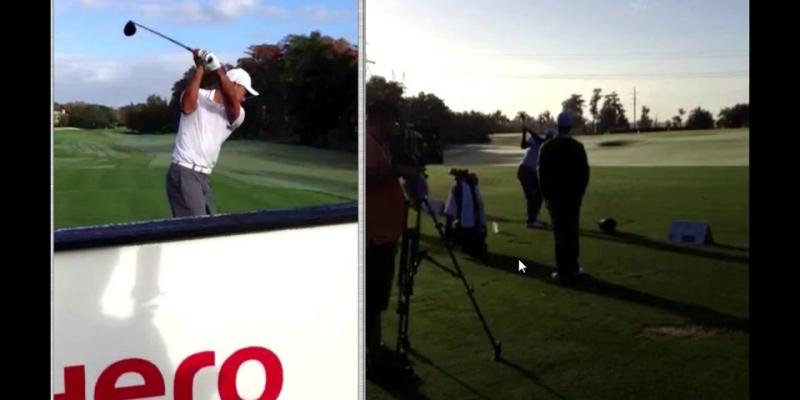 All right guys. Here's your first sneak peak at the return of Tiger Woods at the Hero Tiger Woods Foundation Pro Am today at [inaudible 00:00:14]. I got a couple videos for you, one over here on the right that I'll let loop for a little bit here, of Tiger warming up on the range. That's Chris Como there blocking our view. For those of you that don't know yet, Chris Como is Tiger's new coach right now. What makes this interesting is that Chris is working on his master's in biomechanics. While Shawn Foley also claimed to be a expert in biomechanics, of course, that opinion may vary depending on who you ask there. Many years ago when Tiger first started working with Foley I predicted that Foley's mechanics were going to injure Tiger's back, and of course, not only did that happen but Tiger ended up having surgery because of it. You can watch that video. It's one of the recommended videos on the right side of your screen now if you want to watch that video. It was back from 2009, I believe, 2010.

What's interesting is trying to figure out, of course, what Chris is working on with Tiger. If you watch the interview, or heard the interview, read the interview, that what Tiger was talking about his changes with Como is that he's trying to kind of get back to how he used to swing. They actually went back and looked at a lot of his old footage. What's interesting is what I was watching Tiger do on the course today, and that's this video over here on the left. What's interesting is note the massively higher position of his hands. Of course, for those of you that are RST guys and you've seen the five minutes of perfect back swing video, those arms and hands and shoulder position look identical to what I'm demonstrating for you to do on that video, so another recommended video for you to watch if you haven't seen that already, is the five minutes to perfect back swing.

It looks quite obvious that Tiger's trying to get his hands into a much higher more leveraged position than what he's done in the past where his arms, and if we look at what he's still doing in his swing, obviously our practice swings and our real swings don't always quite match up just yet. With Foley he got really short and his arms are really deep and flag. See his hands are way back behind his shoulders, and here he's trying to get his hands right above his shoulder, again, exact positions that I demonstrated in the five minutes to perfect back swing video. Also, how much higher his shoulder elevation is, and again, another video on that, how much shoulder elevation do you need in the swing.

You'll notice that now his right elbow, guess what, is right at the base of his peck. Exactly like I talk about in the how much shoulder elevation video and the five minutes to a perfect back swing video. Here what he's still doing, obviously he's not going to change this overnight, is his shoulder or his elbow is quite a bit lower still. Again, getting rid of a lot of these bad habits that he developed with Foley are going to take some time, but it so far it looks like Como may have Tiger on the right direction. If the ball striking that he was demonstrating today is any indication, I was very, very impressed with what [inaudible 00:03:07] let this play for a second so you can see his drills here. Very impressed with how little curvature there is on the ball now compared to what Tiger had been doing in the past four years where he's hitting massive, massive cuts. These balls were literally cutting with the driver two or three yards, were striped and hit much, much more consistently than before.

Again, a lot of this looks like some of the changes he's trying to make are going to put him right back in line with RST and protect his back. Obviously if Como knows anything about biomechanics and physics he's going to understand that getting Tiger's hands much higher and staying in front of his body will make it much easier for him to generate a lot more leverage from this position than it will from this position, and that's just basic physics and leverage 101.

I did see that Tiger was not hitting the ball as far as he used to back when he was with Haney. Definitely he lost quite a bit of distance over the years with Foley. It was averaged the shortest off the tee that he'd ever averaged on his career in the PGA Tour. Hopefully as he starts getting his hands back up into this new RST position he'll start to pickup some of that club head speed as well. I know that's one of his key goals.

Anyway, sneak peak at it for you today to see exactly what's going on with Tiger's changes. We'll keep an eye on things and see if he keeps moving Tiger in the right direction. In the meantime, check out the related videos on the right to get you into much more powerful leverage positions, and of course, if you've lost club head, as I mentioned, Tiger's lost a lot of speed, and he did so for the exact same reasons that I talk about in the video How To Maintain Club Head Speed As You Get Older. Check out those videos and then we'll keep seeing you on the other side.