You probably overuse your hands during the first half of the backswing, like most golfers, and yank the club behind you almost immediately. This one move can be disastrous and lead to countless swing problems. Even if you avoid it during the takeaway, there's a good chance you get "too deep" by the time you're at the top of your swing. Either way, the simple drill in this new video has got you covered.

Get an On Plane Golf Swing with the 4 Square Drill

On Plane vs Under the Plane Golf Swing

Fix Your Flying Elbow in Your Backswing 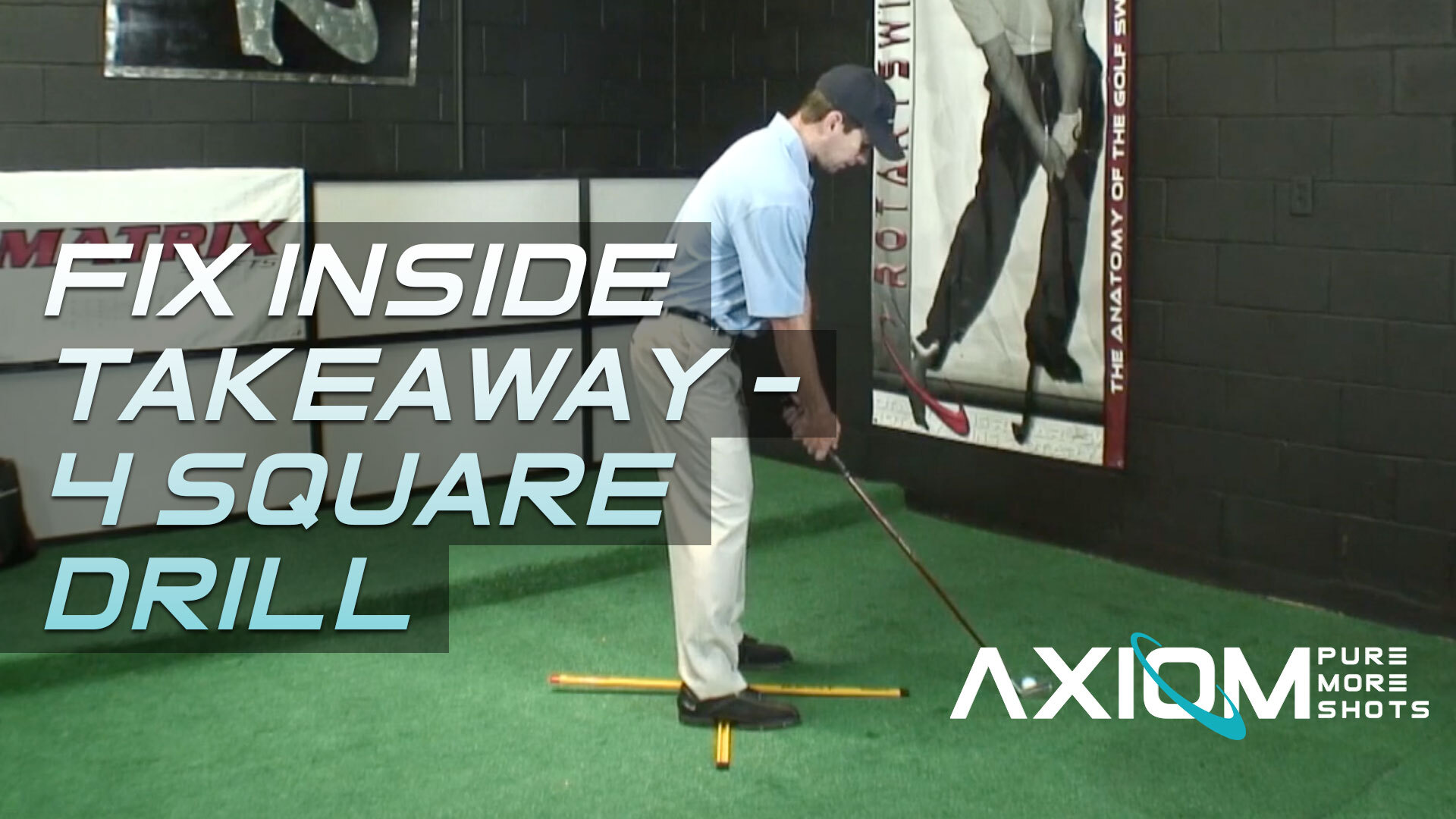 While there are a lot of golf instruction videos on the website that cover a lot of details about the golf swing, there would literally be hundreds more if I covered every single thing that I use typically in a in-person lesson throughout the week. One of those golf swing drills that is really, really important, that I wanted to put on the site that I use almost every day, is something I just call the 4 square visual. All it is, I've got a little alignment aid here. It's going to help you visualize how this works in the swing.

What I always do is, I divide the golf swing into two halves and two sides. When you do that, you get quadrants, obviously. What I want to talk about today is that, from down the line view, my front half and back half. If you think about the golf swing in terms of those perspectives, then you think about face on you've got a left and right side, that's where you see these two yellow lines. This line here, down the middle, would represent my left and right side. This line here represents my back half, everything over here, and my front half, everything over here.

What I'm specifically going to talk about today is the golf backswing. What you're going to visualize when you're working on stuff, especially if you struggle with the golf club getting deep. What I do a lot with my students is, I'll lay shafts out on the ground so they can see this. Then, I create this quadrant where I have one, this is box one. Box two. Box three, and box four. When you have those four boxes, you know where the club and your body needs to be during different phases of the swing.

For instance, during the golf takeaway and backswing, one of the things that I emphasize a lot is that the club, as far as you're concerned, should never move into box three. Which would be this quadrant over here. Obviously it does, and you want it to, but the problem is people move it there incorrectly. That's how the club gets buried, and stuck, and roll inside. During the takeaway, what I want to feel is that the club always stays in box two.

It's always going to stay on this side of my front half here. As I take the golf club back, what I don't want to do is this. Now you can see the club has moved into box three from your perspective. Now the golf club's inside, and now I'm in trouble. Instead, what I want to do is turn, that the club stays always out in box two. Now as I do that, the club's staying out in front of me. To a lot of golfers, it feels like the club's doing this.

When you're doing that, it's just the feeling because you're used to moving your arms, and getting the club way over here. The feeling is very different. Versus, if I just turn my body and I use my arms to elevate, the club stays out in box two the whole time. That's a really important piece to get, because the only way that the club's going to do that, stay in box two, is if you move correctly during the backswing.

That is rotation of your upper body, and elevation of your arms. You put those two things together, the club travels back on a proper golf swing plane. The problem is, people use their arms to swing the club across into the depth dimension of the swing. When I talk about that, everything on this side is depth. That's me, moving the club behind me. Everything up and down is the vertical dimension. I want to feel that my arms are only working in that vertical dimension during the backswing, and my rotation is what's going to move the club into box three.

If you're just visualizing this and you feel the club stays out in box two the whole time, then as I keep going to the top, you keep turning, it will still feel that it stays out there the entire time if you're used to going back. You don't need a fancy training aid like this. We have them on the side, I believe. If you throw down a shaft and put it on your toe line here, if I didn't have this fancy thing, I just put it right over my toe right about here.

I take the golf club back, I want to see that during the end of my takeaway if I move correctly, my shaft is directly over this yellow line every single time. That's me keeping the club, elevating and going back, and rotation to move the club into the depth dimension. I'm just turning back. Use this visual when you practice, especially if you have a problem getting the club going outside. Excuse me, inside. Start working on the club feeling like it stays in box two during the entire golf backswing. That will help you stop getting stuck going back. Use this visual.

Throw a club down on the ground, and start checking your position, like I said. Even during the takeaway, if you check that the club is staying out in front of you and going over that line when you're done, you see my shafts are parallel to each other. My club shaft is directly over the yellow line here, to finish the takeaway. Then I'm going to keep going up from there, and it's going to feel like it stays out of box two. Use this. I use it all the time when I teach. It's a very effective visual, and it will help you with your takeaway, as well.