You now have a 3-step drill to help you cure your chicken wing golf swing once and for all. Not only will this video get your swing looking and feeling better, but you'll also learn: 1) How to keep your arms nice and wide in your follow through, and 2) How fixing your chicken wing can also stop your over-the-top slice and loss of lag!

Your 3-Step Cure for the "Chicken Wing" Golf Swing 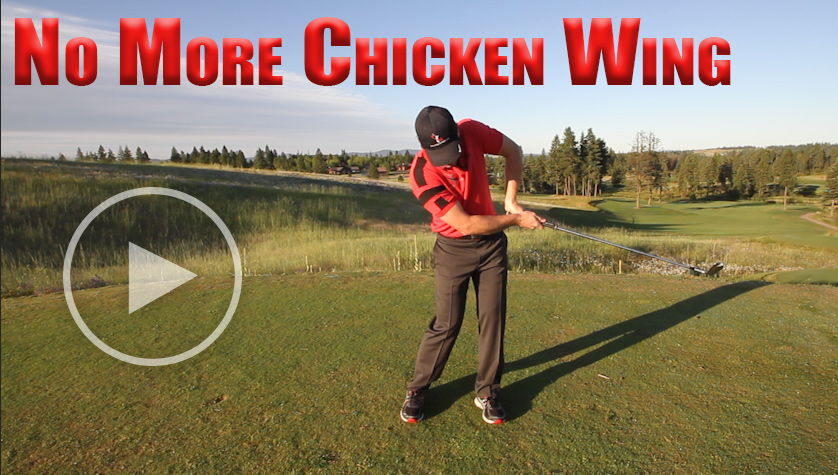 Frustrated with your ugly chicken wing position in the follow through?! This horrible position can't die soon enough! Luckily, RST Founder Chuck Quinton has the cure and get you into that beautiful, extended arms follow through position that all the pros have with a simple golf swing drill. You'll literally find that it's virtually impossible to get into a chicken wing position once you work on this drill.

The dreaded chicken wing. It frustrates millions of golfers out there, and it's honestly one of the simplest things to fix in the swing when you understand the physics at work, and what's really moving the golf club in this swing. The reason everybody chicken wings, and let's just define what the chicken wing really quickly first, the chicken wing for a right-handed golfer, right after impact this left arm is really broken down, typically left wrist breaks down with it, and the whole movement looks like this.

Now to fix this, you have to understand where that force of movement is coming from in order to create this bent left arm. Let's think about this for a second. Logical conclusion would be that it's not coming like this. You're not going through impact and then pulling your left arm up like that. That wouldn't make any sense. It'd be really hard to do. The club has a lot of inertia's, it's coming through impact, so it wants to actually keep traveling in a straight line and it actually wants to pull your arms straight for you. The reason it's not, is because you're pushing from the right side. That's the only way that you can get this left arm and shoulder to hike up and left wrist to break down, is that you're taking the right side and pushing across with the arm and the shoulder. That's what breaking down the left side. That's what's keeping the club face from releasing, and that's what's giving you a chicken wing. As soon as you stop pushing from the right side, nobody chicken wings anymore. I promise you.

If you just took your right arm completely off the club, which you've no doubt seen I do that in a lot of drills, and let the left arm swing, well look what happens to the width and extension in my follow through. It's extremely wide because this doesn't make any sense with my left arm. If you're chicken winging, you are way too dominant with the right side of your body, and all you need to do is take your right arm off.

Go through the RST five step system. Start focusing on your body movement. Add the left arm in sequence as we go through the drills, and then as you add your right arm, keep letting it come off the club. This is really, really important to start training your brain to release the golf club and let it pull you into this nice wide follow through. And when you let your right hand come off before impact, it becomes really easy to have all of this width and extension that you see in every tour pro on the planet, and that's a huge difference between a tour pro and an amateur, is that they're releasing the club properly with the lead arm and every amateur tries to hit with the right side and they look like this.

It's that simple to fix. Take your right arm completely off the club. Work through the five step system and all of the sudden you'll have all this width. I want you to think about a visual that's going to help you, and I discuss more in depth in the throw the clubhead the ball video. What you're really trying to do is let the club head release and pull you. You shouldn't be trying to control the club head through the hitting area. That's the last thing on earth you want to do. You actually want to feel like you're almost letting go of the club, even with both hands, through the hitting area. It's called a release for a reason.

Think about that for a second. What does it mean to release the club? Well when you're chicken winging, you're doing the opposite. You're still kind of trying to dominate and push the club and force it to do something, and what I'm trying to do is literally throw it. I'm literally trying to release the club with my hands and it has no choice but to pull me through and nice and wide into this big wide extension in my arms in the follow through.

Start thinking about what it means to release something, and you will get rid of this chicken wing. Let go. Let your right hand come completely off the club, even while you're hitting balls, let it come off. It's not going to hurt anything. As you come through and release it, your arms will be nice and wide in the follow through. If you're chicken winging it, get that right arm out of the equation, go through the five step system so you start focusing on your body movements, and not worrying about trying to control the club with the right hand.

It will take a little bit of time to get comfortable swinging with the left arm, but we've got a lot of great drills. The five minutes to the perfect release video walks you through step by step how to start releasing the club and training this lead arm, so that you can all of the sudden get rid the right arm dominance thing that killing your golf swing, that's causing you to lose lag. It's causing you to chicken wing and scoop it. Hit it fat. Hit it thin. All of this stuff comes from too much right side dominance.


JOIN OUR 389,917 MEMBERS AND GET INSTANT FREE ACCESS TO DOZENS OF VIDEOS!

Get Your Free Membership to Finish Watching "Cure Chicken Wing in the Golf Swing" Right Now!

Get Your Free Membership to Finish Watching "Cure Chicken Wing in the Golf Swing" Right Now!

Join RotarySwing today with our lifetime guarantee and get immediate access to our 500+ other instructional videos!