How to be a more consistent golfer by just changing what your left knee does in the backswing. 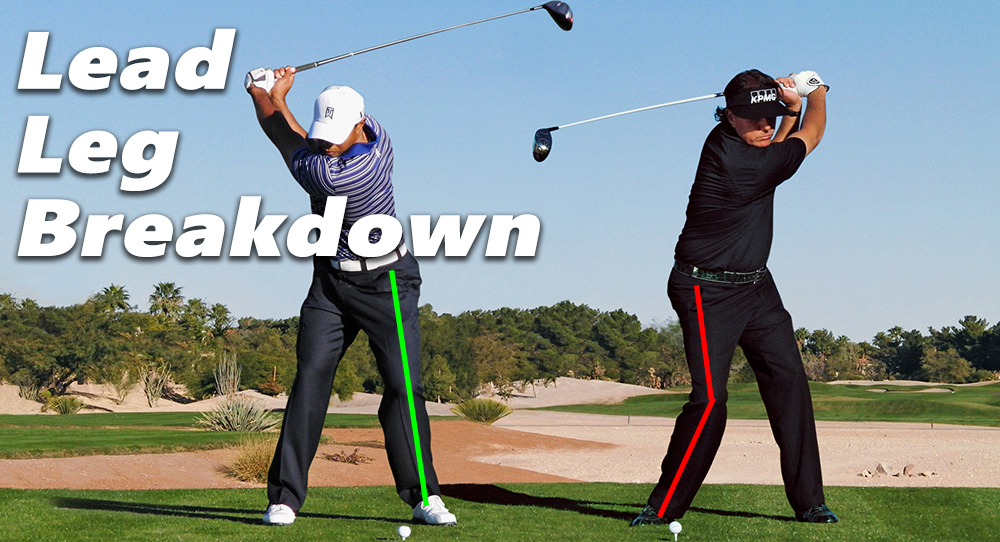 Hey guys, Chuck Quinton here from Rotaryswing.com and today I'm gonna talk about one simple change you can make in your golf swing that's gonna create a lot more stability and thus consistency and even more power in your golf swing by just doing one different thing with your left knee. For most golfers they start getting into problems where they start to reverse pivot and things like that, and it's actually caused by how their lower body moves.

So if you have a tendency to reverse pivot or not have a lot of power in your swing listen up because if you're not paying attention to how this left knee is moving this could apply directly to your swing. What a lot of golfers do, most common with amateurs, the left knee gets sloppy and they let it move too much. So during the backswing this left knee kicks in like this, and we call this left side breakdown when you can see this big kink in the left side of the body.

Rather than having a really stable lower body that doesn't move that much, remember you need your lower body to be like a foundation on a house, so it needs to be a big old oak tree, nice and stable. It's got to move, but it has to be relatively quiet. The more movement you add in your golf swing, the more variables you create and the more variables you create, the less consistent you're going to be.

Golfers do this all the time. They either push from the left side to try and help them turn when they over rotate their hips. There's a video on the website about what happens when you over rotate your hips and how to stop it, so I won't talk about that here. But that's what they end up doing and this left knee is broken down and now you know that the left knee has got to get all the way back over here on the downswing.

So the further you move it in the backswing, the further and faster you've got to move it in the downswing, and of course, that's just making it harder to repeat the same move. So what we wanna do is have that knee move very little and it moves in response to how the rest of your body is moving. It's not an action in and of itself. That means you shouldn't try and move your left knee, your left knee is going to get moved by the rest of your body.

Let's take a look at what happens next. A golfer does this all the time, left knee buckles in, breaks down, we've got this big problem here. Now what they do is they say, "Oh well I realize I look like this at the top of my swing and this doesn't seem very powerful, so now I'm not gonna let it move at all." So the next thing we see is this or they let that left knee only move forward, and those two things are kind of siblings.

If I don't let it move at all then I can't really shift my weight, and if I can't shift my weight and I create a lot of stiffness and tightness in my body, I've got all this tension that's not gonna help me move fluidly. So they let it move forward a little bit, and that creates what is essentially going to be a reverse pivot as you ... By the time you get to the top is you let this knee only move out over the toe. Neither one of those are desirable, so how should the knee move?

Well it's very, very simple. Don't think about moving your knee at first and don't think about trying to hold it in place. Just leave it alone for a second. I want you just to work on rotating your upper body and as I focus on twisting my ribcage, pulling that right shoulder blade back like we talk about on the take away video, my left knee is going to get moved. As my upper body rotates, it starts pulling everything around with it, including my hips and then the left knee moves slightly in and slightly forward.

It shouldn't be an exaggerated movement and it shouldn't be something that you're consciously trying to do. I'm just rotating my body back and as my hips get pulled in because my upper body is rotating, that moves the knee in. The knee doesn't buckle in, it doesn't stay this way, it doesn't go that way. It just moves slightly in and slightly out during the backswing. If you can do that, you'll create a lot more consistency in your swing because you're no longer trying to recover from the knee being buckled in like this and trying to snap back to the left. You're not trying to recover from a position where you didn't shift your weight at all.

Remember if you don't shift your weight going back, you have nowhere to go going down. So your transition is virtually impossible. It's very difficult to move fluidly and relaxed and athletically when you're all tight. We've gotta let that knee move, but it just needs to move naturally.

Get Your Free Membership to Finish Watching "Left Knee Movement in the Golf Swing" Right Now!

Get Your Free Membership to Finish Watching "Left Knee Movement in the Golf Swing" Right Now!