Fix Your Release - Trail Shoulder Back

Fix Your Release - Trail Shoulder Back

This golf instruction video is for those who struggle to stop spinning their shoulders open through impact and want to learn how to easily draw the golf ball. 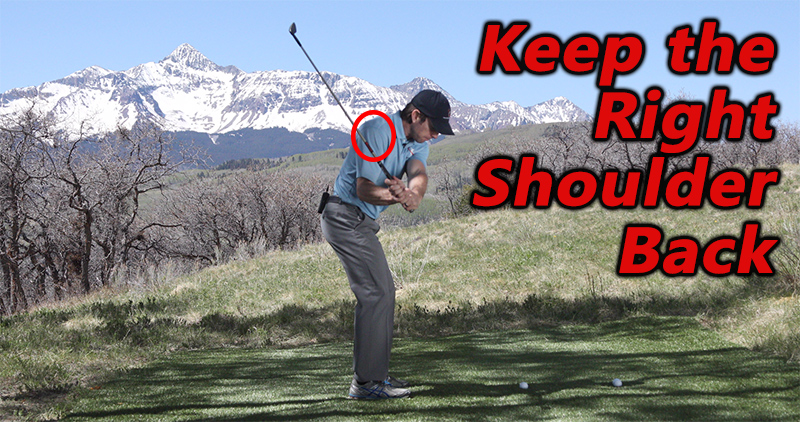 There's no greater feeling in golf than puring an iron shot like that, and releasing the golf club with no effort. When I hit a 7 iron like that, I feel like the ball leaps off the face, and I didn't have to do anything to hit the ball that far and that hard. The trick is all in my release. What I want to talk about today is the number one problem I see in amateur golfers, when they release their club, and the difference between a pro and an amateur is really only a few degrees when it comes down to it.
So, what I'm going to do, I want to talk about what the club face should look like on the other side of the ball when you're looking at your swing and the swing analyzer, because you should always be looking at your swing on video, otherwise you have no idea what you're really doing. Never ever rely on feel, because feel and real are never the same.
So, when you're looking at your swing on video, and you look at just after the ball, the number one thing that I see most amateurs golfers doing is the club face looks like this. The reason is, they're trying to push the club through the hitting area, instead of letting the club turn over. The club, as I've talked about a bunch, is designed to rotate around the heel, that's why they put the shaft on the left side, instead of in the center of the face. If they wanted the club face to stay straight through the hitting area, they would have put it there. It's designed to rotate, you have to let it.
If you're holding on to the face, and pushing through, all you're doing is not only slowing the club down, but you're keeping the club from squaring up and releasing naturally. I didn't try and flip my hands over there, as you saw the club face turnover, all I did was keep my shoulders back and let the club release, and let my arms throw the club to get the club to turn over naturally. From face on, the biggest difference that you're going to look at with your swing when you do this, is that your right shoulder, you kind of want to envision this, keep your right shoulder away from the ball and the target as long as humanly possible.
What I mean by that is, as you're coming down, the worst thing you could do is start driving hard off this right side and getting the right shoulder back in front of the ball very early in the swing, it's going to hold the face open, and that's going to be a check swing down the first base line.
You want to hit a home run, then that actually happens by putting less effort into your swing. Keeping your right shoulder back, now the club, once it gets to the ball, if my right shoulder stays back and doesn't move forward, well the club isn't going to magically stop. It's got to keep going, there's too much momentum. So, instead of turning to move the club, I just want my forearms to turn over. My right shoulder appears that it stays in the same spot through this release area. And by doing that, the club is now allowed to accelerate independent of me.
Notice how little my body's working. It's not doing anything. I've posted up, golf swing's done as far as I'm concerned, all I got to do is let my forearm bones turn over, to almost to the point where my wrist would touch each other, but I'm not magically trying to make this happen. I'm not forcing it over, that'd be a flip, I'm just letting the club face rotate the way it naturally wants to.
So, when you're looking at your swing on video, I want you to start checking ... I'll hit another one here, and I'll show you the opposite, where I turn through and you'll be able to see the difference in the club face angle as it comes through the ball. Now, if you look at that one, you're going to see the club face stayed open, open, open, and it was a weak skanky, didn't go anywhere, and that's way more work for way less payoff. All I want to do is keep this right shoulder away from the target as long as humanly possible, let my forearms turnover just like I talk about in many of the release videos and the shaking hands video. Start checking your club face, you want to see it on this side of the ball already squared up and released when it's in the three o'clock position. If it looks like this, you're not releasing the club properly, and you're costing yourself tons of distance and tons of accuracy.

Get Your Free Membership to Finish Watching "Fix Your Release - Trail Shoulder Back" Right Now!

Get Your Free Membership to Finish Watching "Fix Your Release - Trail Shoulder Back" Right Now!

Join RotarySwing today with our lifetime guarantee and your golf swing will never be the same!