Throw the Club Head at the Golf Ball

Throw the Club Head at the Golf Ball

Unlock the leverage, speed and power of your golf swing by understanding the physics behind generating maximum club head speed. Learn to Throw the Club head at the ball for effortless power. 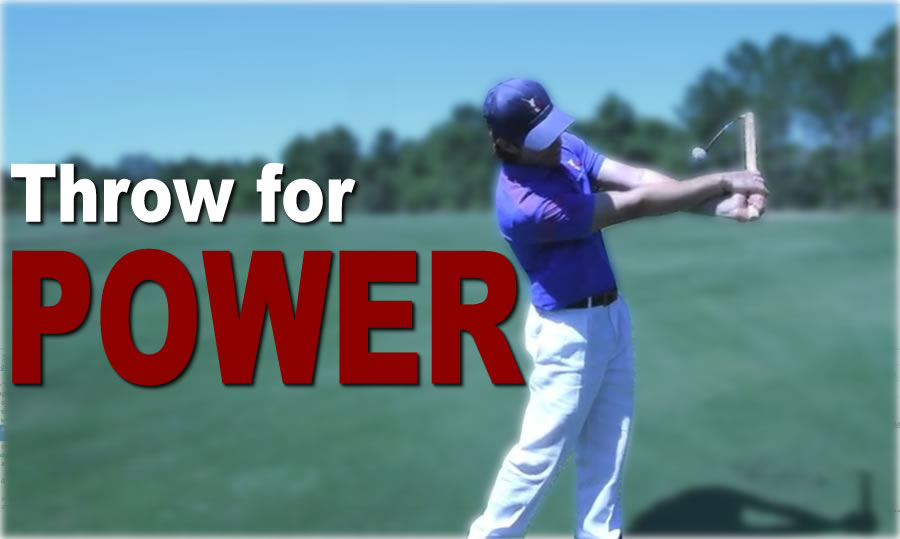 Understanding the physics of the golf swing and specifically, of golf club release, is a daunting task.  With so many conflicting views on the golf swing, RotarySwing.com founder Chuck Quinton is here to clarify the actual science and physiology of proper swing movement.

When talking about the details of Golf Club Release, the goal is to expend the minimum amount of effort in order to get the maximum speed and power.  Most people do this all wrong!

It might be hard to beleive, but PULLING your body through the swing to create leverage, then releasing the club head at the ball  is the correct way to generate speed.  Most golfers try and push their way through the backswing and followthrough to golf club speed and it just won't work.

Using this flail device as a visual training aid, you can see how generating golf club speed is truly a factor of keeping a compact and loaded positon that releases leverage that you store up during a proper golf swing.  THE KEY IS RELEASING YOUR LEVERED ENERGY.

Remember: Your two keeys are to always move in the oposite direction that the club head is going and to throw your club head at the golf ball to release your full power.

Hey guys, Chuck Quinton here, Rotary Swing resident mad scientist. I'm cut. My trusty little flail device here that I use in one of the other videos on how your body should be always moving in the opposite direction that the club is traveling. Now I want to help you understand the second perfect swing. That's the purpose, number one. Your body should always be moving in the opposite direction. Your second purpose is how do you release the club? Now, we've talked about the release quite a bit. In the clinics that we do, we get really in depth on releasing the club. But specifically, I want you to think about it for a second. What does it mean to release the club? What does it mean to release anything?

I want you to understand a couple things about how we get that club to release, and where we release from, which that's going to be a really key spot. The key thing to think about in just a second. Where do we release from? The key is that you need to do the opposite of probably what you're doing right now. Every single student just about that we see coming into our golf academy here at the Ritz Carlton Orlando is driving their body from their trailing side, their pushing side, through the vall, through the impact area, to try and move the club fast.

This is done for a simple reason, two simple reasons. One most everybody that plays golf is playing golf right handed. They're naturally right handed playing golf from the left side of the ball. Of course, if you've watched my other videos on why golf is so hard and how to fix it, is when you're doing it from this side, lots of bad things are going to happen. Of course, being naturally right hand dominant, it's going to be a tendency to want to use that side. That's the first thing that we've got to start overcoming is that the last thing on earth you'd ever want to do is move as I mentioned in the last video about moving in the opposite direction of the club, is moving in the same direction of the club. If you take my little flail device here and I try to move this ball, out imagine there's a golf ball here and I try to move it by moving in the same direction, doesn't work very well. I'm always moving in the opposite direction.

To do that, my body has got to be rotating this way. Now, when I get the club to actually release, what do my arms actually do? This is where we get back into the release point. We want to physically throw the club head at the ball. The simplest way to explain the golf swing is that you are throwing the club head at the ball. Now, I want to be clear about something. I'm not telling you to actively throw your right arm at it. You can do that once everything else is working correctly and help speed things up. But you still got to release it at the bottom rather than push against the shaft through the hitting area.

How do you know if you're pushing against the shaft? Well there's a bunch of things you can see. You'll see golfers with their right side really open, their shoulders spinning open through the hitting area and looking really jammed up. This trailing arm is really bent. You can also look at your forefinger on the trailing hand. If you see that it's lean like this against the shaft and twisting, trying to help square the club face, you know that you're pushing from that dominant side. You don't want to do that. That's just going to slow it down.

What you want to do, the fastest way to get something to move is to throw it. To release it. What you want to start thinking about in your golf swing to get true maximum speed is as you're coming down, I'm going to move from the lead side, not the right side because if I move from this trailing side, it's going to open my shoulders right away. I'm moving from my lead side. My shoulders can stay shut. Now from here, as I straighten my leg and open my hips up a little bit, all I've got to do now is throw the club head at the ball.

Now you'll notice my shoulders and my arms and my body not doing very much, but the ball on the end of my string here is moving really fast. I don't have to move very fast to get the club head to move very fast if I throw the club head effectively at the ball. That is your job in the golf swing, not to push it through and move really slow, and move your body really aggressive and trying to move as fast as you can to try to get it to move fast. You'll never beat somebody who's throwing something to get it to accelerate.

You want to throw and release it coming to the hitting area. Now this little string here is a great way to think about it. Now obviously the shaft in your golf club is actually relatively quite stiff. It doesn't bend around like this thing does, or like a rubber hose. But if you pretended and you imagined that this is what your golf shaft was like, you would decide pretty quickly that turning your chest through like a lot of the golf commentators on TV tell you to keep turn your chest through the target, doing that what would happen to this? It would never straighten up. It wouldn't release until too late.

To get this to move very very fast you want to stop turning at some point and then let the levers that you have in your swing, which are going to be all these angles that you're creating in your arms and your wrists, let those release. When you let those release, notice I said let, when you let those release, they reach maximum speed. You're releasing all of the stored up energy rather than continuing to turn through and have all of these levers that never get a chance to release. You want to throw them at the ball and that is the key to creating club head speed.

You have two main jobs in the swing, apart from creating and preserving, maintaining lag and releasing lag. You want to always be moving in the opposite direction that the club is going, and you want to throw effectively the club head at the ball. That is what rotary swing is going to teach you when you follow our step by step series on how to swing properly the way your body was designed to move efficiently, powerfully, and safely through out the golf swing.

Get Your Free Membership to Finish Watching "Throw the Club Head at the Golf Ball" Right Now!

Get Your Free Membership to Finish Watching "Throw the Club Head at the Golf Ball" Right Now! 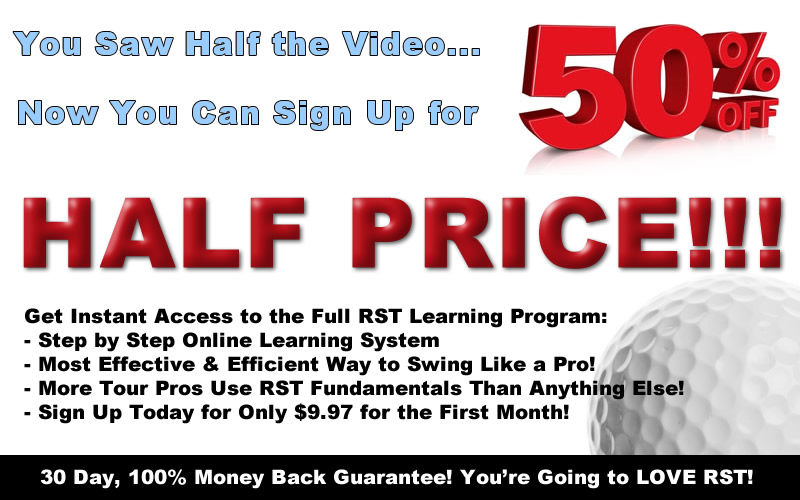