Just how different should your iron swing be vs. your driver swing? The answer will surprise you! 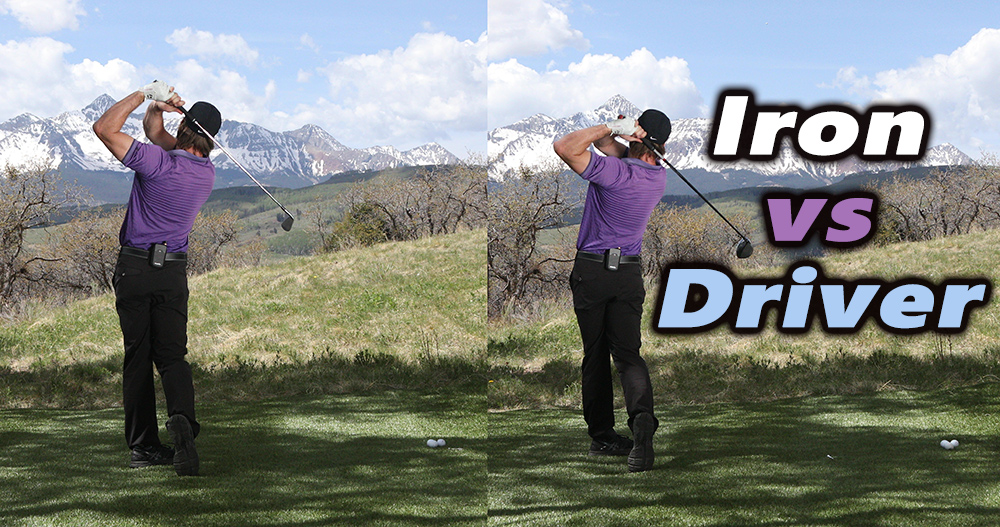 One of the questions that we get asked all the time is what's the difference? What do I need to do differently with my driver versus my irons? And I'm glad you asked because it's super common and the reality is

Nothing. You don't do anything different whatsoever.

Now, of course, with the driver, I've talked about in the bomb, your driver series,

That it is a specialty club because of the way the

Head's designed, you do need to hit the ball higher on the face, which of course requires a T. We can't do that with an irony, hit an iron high on the face, not going to go anywhere. There's no

Mass back here, high on the face. So obviously that's an obvious difference, but it doesn't change the way you swing the club. It changes the way you set up to the ball, which of course involves a T. Now, the other thing that you'll only other change that you'll ever make with a driver swing is moving the ball up in your stance. And as I've talked about in the bomb, your driver series slightly inside the target line and changing your alignment slightly. I've talked about that in this video. So if you'd take a look at those, you'll understand exactly what I'm talking about there,

At what feels like to you, the exact same speed. One of the things that people don't realize

That just having a longer shaft provides for you, how much it's about two miles, an hour of club head speed that you're going to pick up for every half inch of shuffling. That's why all of your clubs typically are a half inch longer than the other one. And that's why using a single length irons, which I've experimented a lot with is very difficult to make work correctly. Because as you get into the longer clubs, you start losing so much club head speed that you can't make up for it by increasing the loft or decreasing the loft as it were. So, because of that, it's very hard to get your 3, 4, 5 irons up in the air, high enough to get any proper trajectory, proper spin, et cetera. So that's why I've settled in on just standard half inch separations. It's been like this for forever. And the, the reason for it is because you pick up so much speed by just increasing the shuffling.

So from an eight iron that I have here to a driver, you can see there's a huge difference of almost a foot in my shaft link between the two clubs. Let's just say for argument's sake, it is a foot difference. Well, that means that this club, without me doing anything different just by increasing the radius of the swing arc, how far the club head is away from me, the rotating center, this thing's going to move 24 miles an hour faster than this. Now, for many of you, you're listening to that and say, well, listen, I swing my eight iron at 85 miles an hour. My driver at 90 miles an hour. What's the disconnect. Great question. Cause that's what really matters because the math and science of this is a hundred percent legit. Doesn't make you defeat the logic there, but for so many golfers in real-world practice and application, it doesn't work out like that.

Their driver swings almost just as the same speed as their irons. Why is that? It's because you're trying to swing this too hard from the top of your swing. If you go to the top and you're all loaded up and you fire this because you know, you need to swing it faster in your head, but the reality is I want you to try and swing it like that. Try to swing it like your lob wedge. I bet you don't ever blast your lob wedge off the planet because obviously the loft issue and the shuffling helps. But at the same point, it's because you're making a smoother swing. A lot of times you find that you sh you just try to hit one nice and smooth and easy. You end up hitting it too far. We've all done that a million times with irons and drivers.

The key is that you learn to sequence the swing correctly. You let the swing unwind and unfold without you trying to force it from the top. So the reality is iron swing driver swing. I want you to try and feel the exact same body speed. That doesn't mean with the driver. You, when everything's clicking, you can't ramp it up and make it pick up another 5, 6, 7 miles an hour by swinging harder. Of course you can, but everything needs to be jamming. Everything needs to be synced up really well, but when you're just playing a normal round of golf, and maybe everything's not clicking exactly the way that you want swing your eight iron, like your do your driver, swing your driver, like you do your eight iron and all of a sudden you'll be shocked. The club's going to go the same speed. You're going to have more lag. You're going to have less tension. You're going to hit it more consistently because you're not out of control. And that's the whole trick between understanding the driver and the iron.

Get Your Free Membership to Finish Watching "Iron vs. Driver Swing" Right Now!

Get Your Free Membership to Finish Watching "Iron vs. Driver Swing" Right Now!

Join RotarySwing today with our lifetime guarantee and your golf swing will never be the same!