The answer to whether the ball position should be a constant or moved from club to club. 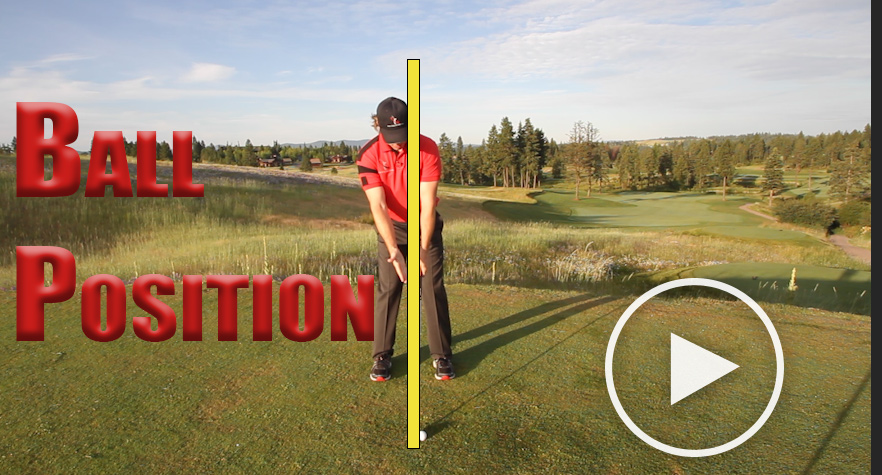 Have you heard that you should move the ball forward or back in your golf setup based on what club you're using? What does science tell us about this piece of advice? Chuck Quinton tells you the science behind where the golf ball should be played in your setup.

One of my favorite questions that I get asked all the time is whether or not the golf ball position should change based on the club that you're swinging. It's a great question because again a lot of conflicting information out there about ball position. Unfortunately it's one of those things that if you get it wrong, the rest of your swing is going to have a tendency to fall apart. It's so important that the ball's in the right spot every time with every club.

Because of that, because it's primarily lead side dominant, the ball position tends to be just behind the bottom of the swing arc which is going to tend to be pretty far up in the swing, close to the underneath the lead arm shoulder socket, so your left arm shoulder socket because that's the point of maximum extension from the club. When I'm swinging from this pivot point in my left shoulder. As the club keeps moving, you notice now the club's no longer hitting the ground. Now it's hit the ground, as it coming back, it's moving back.

You can see if I was just swinging with my left arm, the bottom of my swing arc would be directly underneath my shoulder socket. The club's at maximum extension there, so if I set up with the ball here, and I have a proper rotary swing stance width here, the bottom of my swing arc would be right there. I'd want to set the ball just slightly behind it so I make sure that I catch the ball first before I hit the earth so that I don't hit it fat. So the ball position would be just behind this lead shoulder.

Now, the reality is it's not just 100% lead arm dominant. Your right arm is also involved in the swing, of course, it's attached to the club. That's going to kind of balance these two out and move the bottom of your swing arc because the right arm's still attached to the club, it moves the bottom of the swing arc a little bit further back. Not a ton because it's still primarily lead side dominant, but it moves it back a little bit.

Now this pendulum motion where the club's brushing the grass directly underneath my shoulder socket, it's now going to get moved back a little bit, and that's going to necessitate moving the ball back in my stance a little bit. Now that's how we end up with about the logo of your shirt or lead arm because the right arm's attached to it. Now, that's the physics that are involved, and the mechanics of your body that determine ball position. So based on very simple physics.

Does that change when you pick up a four iron versus a pitching wedge? Well, did your body change? Did you position of your lead shoulder change? The pivot points that you've got in your swing, did any of those change? No, of course not. Just because you pick up a four iron doesn't mean you're going to all of a sudden use more right arm and move the bottom of the swing arc further back, so why would the ball position change?

The ball position isn't based on preference or what you feel you want to do in your swing. It's based on mechanics. Just like a grandfather clock, the grandfather clock never misses the bottom of the swing arc right? Always going to be in the same spot. Same thing is true in your swing because you're not ... You're trying to kind of be like a grandfather clock and have some really simple pivot points in the swing which in this case is your shoulders. That doesn't change. The width of your shoulders doesn't change when you pick up a different club.

The ball position is constant. It's always in the exact same spot. You don't want to try and learn different bottoms of the swing arc for each club. The golf swing's hard enough without you trying to learn 14 different golf swings. That's crazy. It's fixed. It's always the same up off your left ear. Now, that doesn't mean you can't change it based on some specialty shots if you want to hit one a little bit lower or change the path. When the club's approaching the ball, you can move the ball back to hit a draw or whatever. In general the bottom line is the rotary swing ball position always in the spot.

So, the ball position's going to be teed up, right. Obviously you're going to use a tee with your driver. Then moving the ball up in your stance allows you to create a little bit more shallow angle of attack as the club is approaching the ball. That's the only exception. Otherwise, ball position, it's always in the same spot about where your left ear is. Draw a straight line. The ball should always be up there. It should never ever be behind that. That's the worst thing that you can do. When you start seeing, and I see this every single day. Guys are set up like this when they come to our golf academy and got a lot of forward shaft lean, I know we got all kinds of problems to start fixing because they're going to be very right side dominant. They're going to pick the club up. They're going to have this really narrow swing going back and this steep hacking motion coming over it.

In order to get them to shallow out, the ball position being up in their stance, it feels like they can't even get the club back to the ball. It feels so far forward. You'll have to get used to that. It takes a little bit to get used to getting the club in the right spot, but all of a sudden all of these other great fundamentals of being able to release the club properly and transfer my weight. All these things start falling into place. So, ball position. It's always in the same spot. It's based on mechanics, and there's no way around that. So, get your ball off your left ear, and all of a sudden you'll start being able to shift your weight. You'll be able to release the club and start hitting the ball cleaner and more crisply than ever before as you keep working through these RST golf swing fundamentals.