In this video, I’ll show you how to create a near-perfect takeaway like Ben Crane. You’ll find out: 1) How lateral movement in the takeaway affects your timing, 2) Why you should keep your arms and hands passive in the takeaway, and 3) How to build power in your swing early on. Check out this video now to get a perfect takeaway that’ll set you up for power! 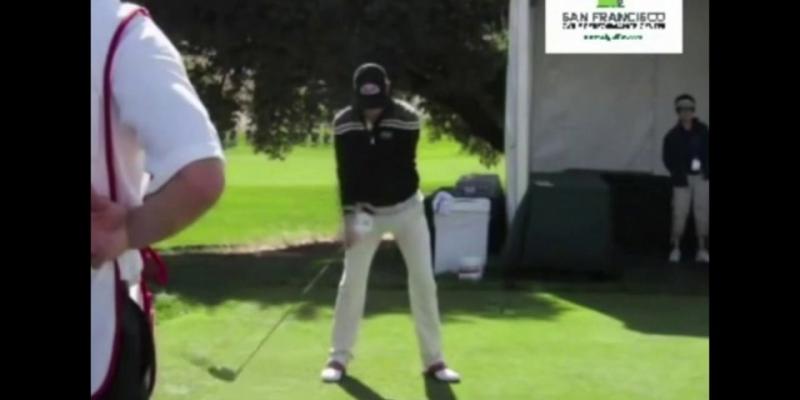 Hello everyone, Rotary Swing Instructor Craig Morrow here, taking a look at this past week's winner Ben Crane, and how you can learn a couple of good RST principle's from his take away.

First off, congratulations to Ben for his wire to wire win in this past week's Fed Ex St. Jude Classic. Now we all now Ben's not the swiftest player on tour, but it might be because he's thinking about getting some really good RST principles at the start of his golf swing and his take away. And the first thing that Ben does really well in his take away, is he keeps his head nice and steady. And what I want you to do is, I want you to watch that red line and Ben's head, as I wind him through his take away.

So the first thing that Ben does really well in his takeaway is he keeps that head nice and steady by using the right side to take the club back in his take away.

The next thing that Ben does really well in his take away, is that his arms and hands are nice and passive. And you'll notice that by the time his hands reach his right thigh, that the club is only a third of the way through his take away. Which is meaning that he's allowing for the rotation of his body to transport the club off the ball. He's not initiating the swing, or the momentum of the club, by setting his left wrist, rotating his left arm, folding his right arm, he's allowing the rotation to take the club back off the ball. And if you want to get nice and wide at the completion of your take away, it all starts by making sure that you're rotating to transport the club off the ball. And you'll notice that by the time Ben gets to the completion of his take away, that his hands are nice and wide away from his right thigh. But it's all started by making sure that he rotated off the ball, versus initiating too much of his arms and hands to get the club back moving.

The last thing that Ben does really well in his take away is he keeps his hips nice and steady. You'll notice that at the completion of his take away, that his belt buckle is pointed just at, or just behind the ball, which is allowing him to start to store up some energy and get some good separation between his shoulders and his hips. If you want to start to build up some torque on your backswing, we have to make sure to limit the hip rotation in the take away. We don't want the hips rotating until after the take away, or you'll torso will start to pull them open to roughly about 40 to 45 degrees. And what Ben does is he allows these hips to stay nice and steady and not rotate, or actively rotate too soon off the ball, which would zap up his energy going back, where the ability for him to build up some good torque on his backswing, which would be getting separation between his shoulders and his hips.

So if you want to hit these three key positions in your gold swing, where your head stays nice and steady, where the arms and hands are nice and passive, and you can get nice and wide on the take away, which will help you get to a nice wide position at the top of your backswing, but also keep those hips nice and still to where you can start to build up some good torque on your backswing, by getting some good separation between the shoulders and your hips, I want you to take a look at the Five Minutes of Mastering Rotation. And in this video, Chuck will explain to you all the principles of using the right shoulder blade and using the obliques to get the momentum of the club swinging off the ball. To where the hips won't actively rotate too soon, so you can build up some good torque. To where the head will stay nice and steady, so you won't be pushing off the left side, or shifting too far laterally to the right. And to where the arms and hands will be nice and passive at the start of the takeaway, so you can build up some nice width, which will help you get nice and wide at the top.

So take a look at the Five Minutes To Mastering Rotation, get looking like Ben off the ball. Keep the head steady, keep the hips quiet, keep the arms and hands passive, build up some nice width, and you'll be on your way to a great take away, and a good position at the top of your backswing.