One of the greatest players of all time, Jack Nicklaus and current world #1 player, Rory Mcilroy have very different looking golf swings, but both players produce a ton of clubhead speed. In this video, I'll show you how both players start the downward move with the hips and ultimately end up in the same powerful position. This key move, allows you to use the kinetic chain in the golf swing and boost up your clubhead speed a massive amount. Make big power in your swing by learning how to use your lower body the correct way! 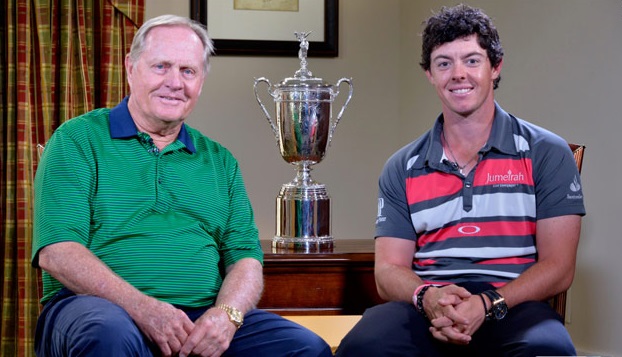 This week's tour analysis, we're gonna do something a little bit on the fun side. I'm going to show you two different players from two different eras. Jack Nicklaus versus Rory McIlroy. I'm going to show you a very powerful move that both players make with their lower half to start their downward move. It's done a little bit differently but ultimately they end up in the same spot. So if you've been looking for a better way to put more power in your golf swing, like some of the best players in the world, then you want to play close attention to this analysis. Let's go ahead and take a look now.

Okay guys, as I said in the opener, we're going to be doing something bold and fun this week. We're going to be showing you guys a comparison between Rory McIlroy and one of the greatest players of all time, Jack Nicklaus. I'm going to start off with a little disclaimer here 'cause I know that this can ... this is one of those topics that can create a lot of controversy around the golfing industry and by no means am I here to bash either one of the players. I'm just here to show you a very common move in the golf swing that was done from one era to the next. Done very differently but ultimately ends up in the same spot. And that's what you're going to see where the modern day golf swing is much more centered, very little body parts moving where the older style golf swing has ... is very lanky, it's very free flowing but they're still using the kinetic chain in the same sort of way and both players obviously are very powerful and of their eras.

That's not to start to create any sort of equipment debate or who's, was the better player of their era. That's not what I'm trying to do here. Obviously I have a ton of respect for both of these players and we're going to continue to see Rory grow within the game of golf and Jack was certainly a guy that brought us a ton of excitement from beginning to end.

All right, so let's get into this. Let's take a look at both players here. From a setup position, you're gonna notice that both players set up very wide as far as their bases are concerned. You'll actually see Jack's feet kind of flare out and this is going to allow him to have some hip mobility. He uses his hips very well in his golf swing. You'll see that both players have set up a little bit more on the wide side here. Modern day equipment is set up to have very high launch conditions with very low spin so you'll see the ball position start to move a little more forward here.

Rory sets up a little more vertical here with his spine where Jack tends to have a little more axis tilt at the address position. And you'll see Rory actually make a small shift over into his trail side here. I'm gonna just focus on his move up to the top of the swing first. So notice the spacing here between the trail thigh and this right hip line. This is a line up from the ankle here. So we'll go ahead and shift over to that side. Oops, let me pause Jack for us. So we're going to shift over into that side, you see that small shift. Now we're loading into that right side and we're basically, we're creating a post in the right leg. But notice how Rory's maintained the width between his knees.

Now this is where I was talking about some of the differences between the eras where the older style golf swing we saw a lot of free flowing movement from the lower half and you'll notice that here with Jack's move as we start to rotate, you're going to see this left leg really kind of dip down. Left foot comes way up off the ground. So obviously we've got a very different looking top part of the golf swing and Jack used this left foot coming up off the ground as one of his big moves to help get his lower half starting the down swing.

You're going to see as he, as we start to work in transition, he's going to work to slam that foot into the ground and then ultimately, we're ending up in a spot where we're staring our golf swing ... Excuse me ... With the lower half. That's exactly what we want to do as far as the kinetic chain is concerned. It allows you to work efficiently and so this is the move right here. So you'll see Jack right now start to shift, he's going to start to plant that left foot into the ground and now his hips and knees are back to that square position. But notice where the trail arm is here. Or I'm sorry, the lead arm. The lead arm is virtually parallel to the ground. Both his hips and knees are back to a square position.

So weight distribution wise, he's still got probably in the ball park of sixty percent of the weight on the lead side and maybe forty percent on the trail side. This is where you'll see Rory do a very similar style move except for he doesn't have his left foot to slam in the ground. He's going to make more of a sitting move into his lead side. You can see here he's kind of sitting down, belt line lowers quite a bit. And then we're gonna go ahead and get back to a square position. So very similar move here so you ... now you notice that the hips and the knees and the lead arm are virtually in the same sort of position here.

So again, you can see that both players worked to get their golf swings started, their down swings started with the lower half. But ultimately did it very differently. So Jack up to the top, he would plant the left foot into the ground, and then he's getting ready to post up. Now this is where both players actually use a lot of their right side to drive very hard. So if you notice here, let me get an arrow. Watch very closely how quickly Jack's right foot comes up off the ground. So Jack is working to drive very hard from the right side and then gets him into this, more of this classic reverse C position here. Okay, that's what he was, one of his signature style moves and then Rory getting down in here, he's got that reverse C looking move but not nearly as much has Jack has. You can see that both players are using their right side to drive up off.

That's fine when we're starting to work with driver swings. You know, you'll hear a lot of times I think people get confused where we don't want to push hard from the right side. But if you've learned how to control most of your movements from the left side of the body, yeah there's a certain balance to where we can use the right side to help the hips. We just want to be very conscious that we're not pushing the hips out past neutral to where you can put a lot of pressure on the knee or the hip or obviously that can help bring the hips forward where you can have some early extension of the spine as well.

But again, you'll see a lot of great golfers even from the new modern era that's coming on, you'll see them driving off the right side. Especially with driver swings but they'll be a little bit more under control with the trail foot and with their iron play. So the point again was just to kind of show you guys how two different eras ended up getting to a very similar looking position in their downward move. Jack planting that left foot down. Rory making a little bit more of a sitting movement and ultimately both these players were very powerful in there eras so ...

All right guys, so that's gonna be our analysis today. I got a couple good videos for you to check out. We have the hip speed and hand speed video. It's a video that Chuck did a number of years ago that kind of talks to you about the importance of both of those. We got a great video that's very scientific in talking a little bit about the acceleration profile. Sequencing for speed in your golf swing. We got the golf kinetic chain and we got sitting into the left side.