In this video, I’ll show you how to swing with power and efficiency like Michelle Wie. You’ll find out: 1) How pushing from your left side constricts your shoulder turn, and 2) How to tighten your backswing to improve your consistency. Check out this video now to create efficient power! 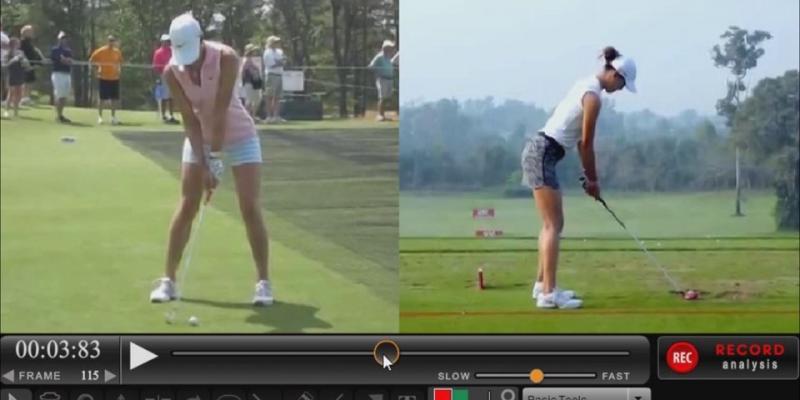 This week Michelle Wie gets her first major championship of her career at Pinehurst Number 2, so congratulations to Michelle Wie.

We're going to be focusing on the whole mantra behind the rotary swing, a big body turn and small arm movements, this week, to create a proper swing plane, and get you to playing consistent golf, just like Michelle does.

So, let's go ahead and get started.

All right. The always exciting and youthful Michelle Wie gets her first major championship of her career, so congratulations to her.

This week we're going to be talking about how she's prioritized her golf swing into a big body turn and small arm movements. Primarily what you'll see out of a lot players that have longer arms or longer limbs, is that they'll get the hands and arms moving into a very long position at the top part of the golf swing and basically lose control. Then they're having to rely on a lot of timing in their golf swing. Michelle always has really focused on the idea of using her body to her advantage, and not really necessarily having to overuse her arms in her golf swing. I'm going to go through that with you today.

If you take a look here, I'm going to show you the face-on view. She does get a little bit of a early wrist set here, just to get the club moving, but if you watch this V in her shirt right here ... If you watch that V, from this point forward, you'll see that it moves at the same rate as the club throughout the entire swing.

Generally speaking, what happens as we get through the takeaway and then start to move the golf club into the back swing, that you'll see a lot of people's rotations shut down, because they start to push from this lead arm or this lead shoulder right here. When you start to push from that lead side, you're basically loading up the shoulder girdle where you're not going to be able to make a full turn. She continues to always keep her focus right on rotation.

So you can see here, like I said, she gets that early set and she's getting through the takeaway. Then she's going to start to work into the vertical plane, with the right arm flexion, and she's still rotating at that same rate as the club. She's always got a magnificent look to her tempo, much like an Ernie Els, to her tempo, when she's got her iron play.

This right here is the top part of her golf swing. As I was starting off by saying at the beginning part of the review, is that generally you would see players that have longer limbs and longer arms, and Michelle is six foot, with the club wrapped around their neck down in this area. But she's consolidated things and she's kept things in control, which has made her one of the better ball strikers out there on tour.

If you look at a lot of her stats, the one stat that she's kind of lacking in, the one department she's lacking in, I think she's 122nd in driving accuracy. But she's got a little bit different, a little bit longer, a little bit out of control golf swing, that really tries to overpower the golf course. If you look at her iron play, she keeps things consolidated, really short and tight. She's actually leading the LPGA tour in most under par rounds. She's got a lot of other stats that are great, that are very attributed to this particular move alone.

So, we always want to make sure that we primarily focus on big body turn and small arm movements. Like we've talked about in the past, we've talked about the acronym rotation, elevation, flexion, REF. You can see over here on the down-the-line view just that.

Like I said, she does get that early wrist set. She's got a little bit of elevation here where her hands and arms have started to lift up just a fraction, just a small upward movement that's a variable. Then she's adding the right arm flexion as she's still continuing to rotate, and then she gets the club into a beautiful spot here at the top.

So, that's really what you need to do to create a proper swing plane and stay in control. You need to make sure that you shift your focus to making sure that you're always rotating your body properly.

But what you need to make sure that you're doing while you're going out to practice is, don't try to aim the golf club into a certain area with the hands and arms. Make sure that you focus on creating that perfectly big body turn, good loaded lower half. Then work on outing that little bit of elevation, that little bit of flexion in the arms. You'll see how much easier it is to create a proper swing plane, get you into a really decent spot at the top of the swing, and play more consistent golf.

Check those videos out, guys. I look forward to working more with you in the future. I hope you have a great day, and play some great golf.