Have you found yourself struggling with the driver, either bouncing the club off the ground before the ball, or maybe hitting that weak banana slice? These common misses can be directly related to improperly shifting your weight. In this video, I'll show you how Padraig shifts his weight correctly throughout the golf swing, yet manages to keep his head steady. I'll also show you some things to look out for in your own swing so that you can overcome some of those troublesome faults. Weight shift is a critical part of the golf swing and will help make your ball striking much more consistent and powerful. Let's get to work on shifting your weight the right way! 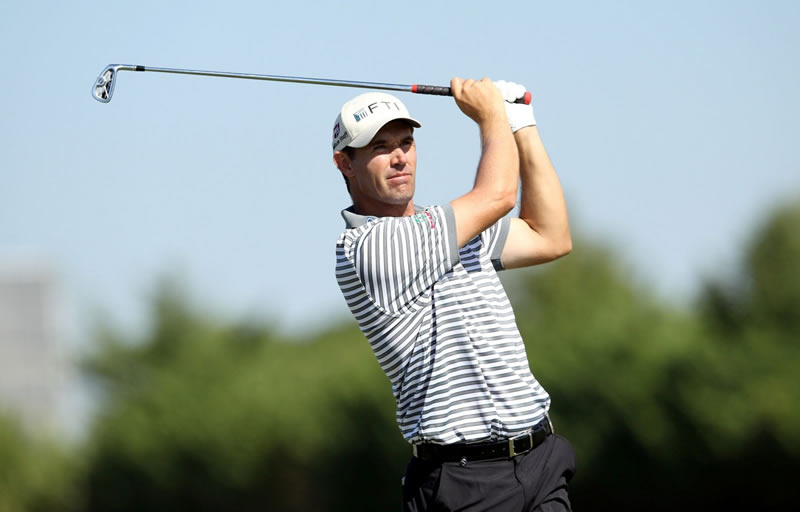 If you've been searching for a solution to hit your driver more solidly, more frequently, then you want to pay close attention to Pádraig Carrington's golf swing. I'm going to show you a couple of great checkpoints that are going to help you overcome some of those major faults that you may have been struggling with, including properly shifting your weight, keeping your head quiet, and releasing the golf club through the hitting area. Let's go ahead and get started.

Okay, guys, we're back with another tour analysis this week of Pádraig Carrington. Congratulations to Pádraig on pulling out a playoff victory over a Brazilian 21-year-old, who played some great golf as well. So it's good to see Pádraig back in the winner's circle, and this week, I'm going to be going through a few things that are gonna kind of highlight some of the areas that are going to help you become a better driver with the golf ball.

And I'll give you a couple of good checkpoints and a couple of good related videos that'll help you get some big things resolved in your golf swing. And if you look at this from a face-on perspective, I'm going to go ahead and mark the head position here at a dress. You'll notice that the head is just behind the golf ball here. We've also gone to a little bit of a wider base. I know that a lot of times, people get confused. What do we do with a driver?

And we do have a video on the website that talks about some driver setup adjustments, and generally speaking, you'll see golfers go to a wider base for a little bit more stability, but we still want to make sure that we're shifting our weight properly throughout the golf swing. And that's one of the things that we see amateur golfers really struggle with is properly shifting their weight. And that's going to be really the whole MO of today's analysis, is how to shift the weight properly in the golf swing.

So I'm gonna mark a line here where the head position is. I'm also gonna mark this center of the hip socket here, which is right around the belt loop on the front of your pants, or two finger widths inside of the pointy pelvic bone on the front of you there. So we're going to go ahead and see a small shift over to the trail side. Again, because we're working from a wider base here, you're not going to see some sort of drastic lateral shift where the head moves off of this line a good five to six inches. It's just enough to shift the weight over there to load this trail side up. So you can see the head moved inch, inch and a half or so.

And now you can notice that the center of the hip socket is virtually where his head position was at the starting point. So it's moved a good three to four inches. Now, what we need to do is we need to be able to shift our weight properly with the lower body in the downswing sequence to start the move. And this is where things go awry for amateur golfers is they'll tend to not want to shift their weight enough. They'll start swinging their arms or their shoulders from the top of the swing, and that creates rotation, and in turn, that's gonna make their head actually give this appearance where they're gonna be hanging way back. And if you've ever struggled with hitting the ground before the golf ball off of your driver, hitting those little drop kick shots, this is a good reason why, is that you haven't really shifted the weight enough.

And Pádraig does it really, really well in his golf swing. You're gonna see a good unload of his hips. So again, his center of his hip socket's now virtually right through that line of where his head was at the starting point. And now he's gonna make a pretty good-sized shift these hips back over to the lead side here, getting ready for a release. What I want you to notice now is that the center of the hip socket is now right over the top of the center of the ankle.

So that's just a proper combination of shifting and unwinding at the same time. Okay, so there's a good shift and a good unwinding of the hips, and this is allowing him to get himself posted into that lead side. So if you've noticed yourself on camera where your head stays way back behind this line, and your hands and arms are starting to get down into the hitting area, then chances are, you didn't shift your weight enough.

Now, on the opposite end of that spectrum, if you've noticed that your head is now moved out in front of this line quite a bit, then we've got to find the culprit as to why you've moved out there. And chances are, that's a lot of trail side dominance, okay? That could be a lot of lateral shift of these hips, and the way to laterally shift them too much is using your trail leg to push really hard or using your right shoulder and your right arm. And if you shift too hard, and you don't rotate, then you're gonna see the head stay out in front. The club's gonna come down really steep. It can even potentially be over the top, and then you'll hit that big slice off the golf course.

So, again, if you've ever struggled with hitting those ugly drop kick shots, I know we've all been there, or if you struggle with being over the top, then you need to pay attention on how you shift your weight and your downswing sequence. And it all starts right from a good setup position, and it all starts with properly loading up the trail side. So loading up that trail side again, you can see that his head has moved. He's loaded up his right side here, and then, in the downward move, you're going to see a good-sized shift and an unwinding of the hips, not just one or the other.

And that, in turn, gets the head into that same position. Then the head stays very quiet, sets him up for release, and he releases on through. You can see that the head still stays in behind that line beautifully, while all that stored power is now coming out through the release for speed.

All right, guys, so if you want to make your weight shift a lot better, then we've got to make sure that we loaded up properly. A good video on the website is Weight Shift #1 video. These will all be in the recommended videos over to the right hand side of video player, and then Weight Shift #3 is another great video that's gonna talk to you about how to get back over to that lead side, and really get things stabilized. Another good video for you guys to check out would be the Straight Left-Legged Impact that's gonna show you how to create some good awareness of some proper muscle groups in order to stabilize things through the hitting area, and you'll be well on your way to overcoming some of those major faults with hanging weight back or getting out in front of your shot. And this will in turn help you keep the golf ball on the golf course more often.

All right, guys, so let's get out there and shift our weight properly. Let's load it, unload it, and let's play some great golf.