How to Read Greens Like a Pro with Proper Feedback

You can improve your green reading skills just like you improve the fundamentals of your full swing - by getting feedback and correcting your errors.

Say you find a putt and you try to read the amount of break. You're about 12 feet away and you guess that it breaks 14 inches. 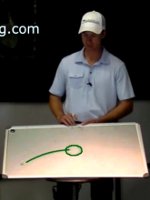 If you make the putt, you assume you read the green correctly

You thought it was 14 inches and you made the putt so you tell yourself, "Yup, I was right. That was 14 inches. Man, I'm a good green reader."

If you're standing over a putt and you roll it and it goes in, you're going to assume that whatever direction you were playing and however much break you thought it was going to have, is what it actually had.

Most of the time we're wrong, but there's no feedback so we never know. Today you're going to learn how to get real feedback on your green reading.

When you work on your swing you use mirrors and video cameras. You think you've got your right arm in exactly the right position, but when you look at yourself on video you realize, "That's nowhere near where I want my right arm," and you make adjustments.

That's exactly the kind of feedback you'll get with this method of green reading.

Every green, every hole, has a bit of a slope. Course designers don't really want to make greens dead flat. 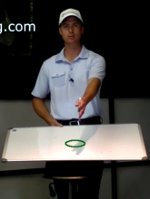 The "green" slopes toward us

If greens were completely flat they would hold water and the grass would die. If it rained a lot the water would puddle up and just sit there, so there's a gentle slope to almost all surfaces of the green.

It's 1-2° in most places, maybe up to 6-7° in spots, but any point on the green is going to have some small degree of slope.

There are some flat spots on greens, but they're overall few and far between.

Picture a green that slopes directly toward you, represented by Clay's whiteboard in these photos. 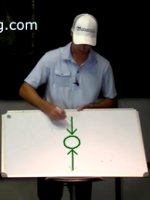 There are two straight putts

Find a brand new hole where you don't know the break to work on your green reading skills. You can do this on the practice green or playing a practice round.

It's great in a tournament practice round. You can find the pin positions for the whole week, find the straight putts and mark them in your yardage book. You'll know exactly how the putt breaks whenever you play that hole.

Walk up to the hole, preferably starting out on the fairway so you can get the general shape of the green and try to see which way they're draining the water off the green. It's much easier to see from 100-150 yards out.

Once you've taken a look from the fairway, go up to the green and walk around the hole. You should be able to get a sense of whether you're walking up or downhill. 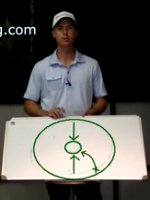 Let's say you take your first guess and you choose the point shown in the photo. Check yourself by stepping back a few more feet, rolling the ball through that point, and watching what it does.

In this case, you'll see that the ball actually breaks to the left instead of going straight, so you know you guessed wrong. That's your feedback. 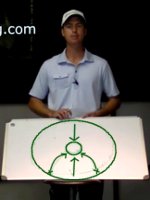 You realize, "OK, that was wrong. That one broke left, so I know the straight point is farther this way," and you guess again.

You roll another ball from the second point, and this time it breaks right.

Now you know for sure that the straight putt is in between those two points, and this time you get it right and the ball goes straight up the hill.

You're testing and getting immediate feedback. You're finding out when you're wrong, and which direction you need to go to get it right. 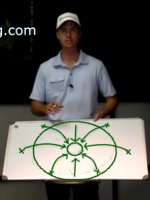 All putts on the left break right, and vice versa

If you make your first guess and it breaks left, you'll know that you need to move left to find the center line.

Test yourself, get feedback, and find the straight putt from below the hole.

The idea is that you're testing yourself. Every time you guess where the straight putt is you roll a ball, see some curve, and adjust. It's just like getting feedback in the mirror or on video for your full swing. 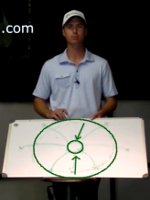 Practicing like this will make you a better green reader because you're constantly testing your knowledge and how well you can read the slope of the green.

Find the straight puts, roll a few, make sure you're correct. Then you can start hitting some practice putts.

Always hit your first few putts of the day from the dead straight position so you know you're starting the ball on your target line.

If you start out playing curved putts - if you're off to the side and it breaks 10-12" - then if you make it you're just going to assume that you're starting it right on the target line when really you could be pushing it or pulling it pretty far off line.

Find a straight putt and start out by making the straight putts so you know you're starting the ball perfectly on line.

Get Your Free Membership to Watch "How to Read Greens" Right Now!