Now it's time to add the golf club into your swing drills. This step will come easily if you've mastered the first three steps. 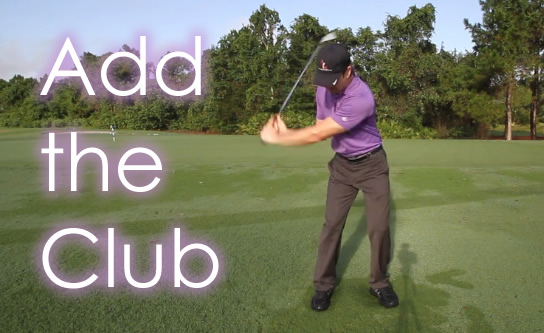 Hopefully you've seen by now that everything with the Rotary Golf Swing is designed to be systematic and progressive.  And what I mean by that is that you don't work on one piece until the piece before it is mastered.  If you think about it for a second, this is how you've learned everything else in life.

How to Learn the Golf Swing

The key to learning and sequencing  the golf swing is not only having the right information but practicing it in the correct way.  That means taking step one, working through step two, then step three and then step four, and so on.  In this case, we're now on to step four of the RST 5 Step Golf Swing, which is adding a golf club to your golf swing drills.  This piece will be very, very easy if you have followed the first three steps and done them correctly.  If you haven't done the first three steps and become proficient at shifting your weight and turning from your core while keeping your arms soft, and then adding the lead arm, then adding in the golf club is going to be a challenge, but it doesn't need to be.  Adding the golf club is going to be easy because the golf club is going to be moved by the other parts body.

That is truly the trick to the golf swing.  You learn to move from the center of your body like a hub and spokes on a wheel.  The wheel on a car gets moved from its hub, not from the tire.  The golf swing also functions very much like a hub and a wheel.  You can imagine that the center of your body or your core is the hub and the engine of your golf swing.  The arms and club make a very good visual representation of the spokes on a wheel in this analogy.  The spokes by themselves don't move unless the hub is moving them.  In the same way you should think that your arms aren't being very actively moved in the golf swing unless your body is telling them what to do.

However, most amateur golfers do the exact opposite in their golf swings.  They focus on swinging their arms and shoulders and hands to move the golf club instead of the other way around.  If you want to be efficient, you need to recruit a lot of muscle fibers in the center of your body in order to generate effortless club head speed.  If you're relying just on the muscles in your arms and shoulders you'll be like most every amateur golfer on the planet and not be able to swing much faster than 92 mph.  However when you want to make that jump into swinging over 100 mph you must recruit enough muscle fiber (about 32 pounds worth) and the only place that that's available to you is in your legs and your trunk and your core.

Fortunately for you, Rotary Golf Swing teaches you exactly how to do that step-by-step.  So by the time you get to this step and you're adding the golf club you're not even realizing you're swinging a golf club.  Your brain is so focused on what your body is doing and how your shifting your weight and rotating from your core that your arms and hands are to be something you don't have to really think about.  They're simply following along and will no longer be the stars of your golf swing.

Okay. Now, as we get to the fourth step of the RST five step system, it's time to add the golf club. Now, as you're working on your golf swing, you can still keep playing and all of those things and still obviously be hitting balls and stuff, but if you're really serious about working on your swing when you're doing the drills, when you're trying to make real improvements and you're not just out pounding balls. It should take a while for you to get into this fourth step. It should take months before you're really worrying about what the club is doing throughout the whole swing. You really have to focus on the fundamentals first. The fundamentals are, as you should know this by now if you've watched the video on fundamentals. They have to be central, origin, absolute, primary. The primary movements, the central movements, are coming from the center of your body. The movements of the club are a consequence independent of what your body does and what your lead arm does and what your weight shift does. Really, when you get to the fourth step and you start adding this gold club.

The club should start just kind of going exactly where you want it to do. If you want it to be here in the take away, all I did is shift my weight and rotate my core. I didn't do anything with my hands. As I go to the top, it's going to be there because I moved my body correctly. As I come down, I create lag because I shifted my weight and so on. As you go through this next series of videos, you should find that adding the club and getting the club in the right position should be very easy. If it's not, you're probably not moving your body correctly. This next step shouldn't be that hard. You can start to get the club into more detailed positions and so on, but the key is to really still make sure that you're still ingraining this movement of your core driving the golf swing. That's your primary mover and the golf club is just moving as a result of how you move from the center.


JOIN OUR 396,105 MEMBERS AND GET INSTANT FREE ACCESS TO DOZENS OF VIDEOS!