In this video, I’ll show you how Martin Kaymer leverages the ground and generates a ton of club head speed. You’ll find out: - How pushing too much from your right side triggers a compensation that hurts your posture, - Where the pros get 60% of the increase in their club head speed, and - Why you should finish in the same stacked position, regardless of what club you’re using. Check out this video now to create more power like Martin Kaymer! 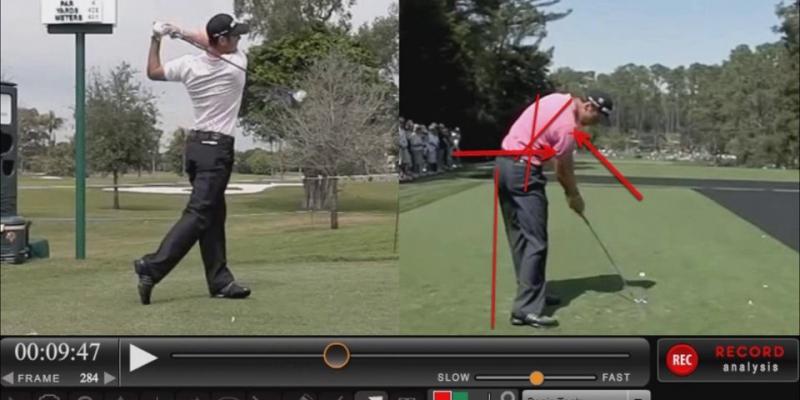 US Open Champion Martin Kaymer rolls over the field this week in stylish fashion. I'm going to show you how Martin puts maximum speed in the correct spot of his golf swing, and that's at impact. Let's go ahead and get started.

All right so Mr. Kaymer, the 2014, US Open Champion steamrolls overs the field at the Pinehurst number 2, the newly renovated Pinehurst number 2. Actually a very, very difficult golf course, that he made look really easy. So, congratulations to Martin. I know that he's going to be around the game for quite a while, and he's proving himself to be a force out there.

I know we just recently did an analysis on Martin. We talked a little bit about how he leverages the ground, and how he uses the kinetic chain, and moves the power up the body properly.

But, I want to talk to you guys about how he prioritizes his golf swing in such a way, that he's adding maximum speed at the correct spot, and that's at impact. I want to compare it to a bullwhip, and the technique of a bullwhip, so you understand where to release the actual speed, and how to release the power at the right time.

Let's go ahead and take a look here. One of the thing that you'll always hear us attribute to club head speed to, is the overall swing shape. And, you'll hear us say, the wide, narrow wide swing shape. You'll hear that talked about a lot in golf. Most of the golf pros that you see on TV today, are all having the very similar swing shapes, where they stay, wide, wide, wide. All the way to the top part of the golf swing. You can see Martin's got his left arm very straight here at the top. Then, as he starts to work in transition, he's going to narrow this arc. That arc is extremely narrow now, where that shaft is very close to his right shoulder.

What we're looking to do, is club head speed usually comes in three feet prior to the golf ball. We see a lot of students that try to put speed in the golf swing too early on, where they try to either get speed into the takeaway. They even speed it up even faster than the back-swing, and then they lose control of the golf club, or they get their wrists fully set at the top of the golf swing, and they really try to add all the speed up here, and they release the right arm, they release the right hand, and then in turn, we run into casting problems, and then the car just kind of runs out of gas before it even gets to the finish line.

We want to make sure that we're building that power up, we're storing that power. And, we're putting the gas on at the correct spot, so you can make it to the finish line. That's kind of the analogy I want you to think of here.

If we take a look over here on the right hand side of the screen with the bullwhip. He's got an angle here in the right arm. And, he's also got an angle up here in the right wrist. Both of these angles are going to be used for leverage, and when he releases this angle, he's basically sending all that power, all that energy from all those two levers. And, he's going to try to maximize speed at the end of the whip here. He's going move it down the chain here.

You can see ... Let me go ahead and freeze Martin, and we'll work over here on the bullwhip side. You're going to see that, as he goes into full extension, so he's full extended, lost both of those angles. Now, out here where I've marked this little red X, that's where the whip is going to be a max speed. It'll actually bread the sound barrier, and make that crack sound.

You can see over here now with Martin's golf swing. He's going to start to release this right angle at the correct time, which is three feet prior to the golf ball. The speed is really starting to increase. Think of it this way, if a tour player goes from 22 miles an hour with a sever or an eight iron in their hands, it goes to about 92 to 94 miles an hour, right about three feet prior to the golf ball. It's done through releasing that right angle. That right arm angle. Then also making sure that you've pulled the power out of the body. And, all that stuff working together is maximizing speed, right at impact.

Also, take notice on how wide Martin stays post impact here. How the left arm stays really straight. Both arms stay fully extended. You can see that he actually keeps that left arm really straight to the top part of his golf swing, and to impact, and then well beyond. That makes just for a very fantastic move at it.

Again, Martin's prioritized his golf swing to where he's putting the speed at the correct spot, and that's what I want you guys to work on. Make sure that you understand the differences between power and speed. Work on building power. You don't need to move the golf club back really, really fast, and get into a good position. You can move it back slowly, make sure you have some good kinesthetic awareness in the body, and then you'll put the speed on. You'll turn that gas on three feet prior to the golf ball. Releasing that right angle, and you'll be able to bomb it past all your friends.

All right guys? So, I want you to check out a couple key videos. The 'Wide Narrow Wide' video, that's in the advanced ... I'm sorry that's in the program section of the introduction. Program introduction section there's the 'Wide Narrow Wide'. Now we have the advanced down-swing section. I want you to check out the, 'Sling Shot Release Technique'. That's a video, where Clay talked about, basically feeling like you're ripping the grip right off the club. That's going to help you maximize speed at the bottom of the arc there as well.

Then always make sure you check out the 'Lag and Release' video. The 'Lag and Release Speed Drills', from the nine to three section. That's in the down-swing as well. So, check out those videos. Put those to use, and make sure you're putting the speed and turning the gas on at the right time, so your car can get to the finish line, and can bomb it past all your friends.

All right guys, I look forward to working more with you in the future. Hope you have a great day, and we'll talk to you soon.