Golf instruction has changed for as long as we can remember. One thing that has not changed in the golf swing in 10+ years, is how to create efficient clubhead speed through leverage. In this video, I'll show you how Rory Mcilroy's current swing, stacks up against Tiger Wood's swing in 2001. 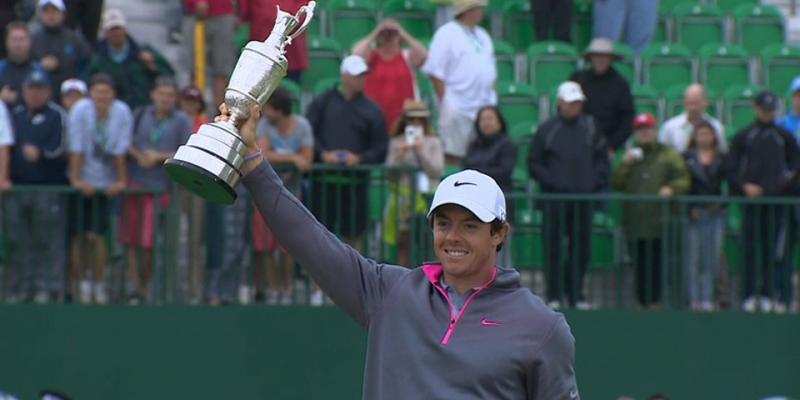 It's pretty clear for as long as we can remember that golf instruction has always changed and followed the best player like a lost puppy dog and never really been able to give you the hows and the whys of the golf swing. At rotaryswing.com, we do just that. We believe in giving facts based information that's going to help you create the golf swing of your dreams. I'm going to do something a little different this week. I'm going to show you how the 2014 golf swing of Rory McIlroy stacks up against the 2001 swing of Tiger Woods. Let's go ahead and get started.

All right. The young 25-year-old Rory McIlroy gets his third major championship of his career. Congratulations to Rory McIlroy on that feat. That is absolutely fantastic. He is absolutely awesome to watch and really great for the game of golf. This week, I know that I started out by talking about how golf instruction has always wavered or changed over for as long as we can remember. One of the things that has not changed over from one decade to the next between Tiger Woods of 2001 to Rory McIlroy to today is where we create a lot of efficient club head speed and that's going to be through leverage. I'm going to show you a lot of the common things that both of these players have in their golf swings in order to make a lot of efficient moves, so you can in turn use that to create speed.

Let's go ahead and take a good close look at things here. I'm going to go ahead and start off with Rory. I'm going to show you guys that maintaining the width between your knees is going to be a critical point in understanding how to use the lower body effectively and efficiently throughout the entire golf swing. I'm going to mark it on both players, then also I'm going to mark a very familiar line for all of you guys and it's right across the belt on both players. Tiger's got his belt up a little bit high. He's got a little bit larger of a shirt on here. Rory's belt is right in this area. Let's go ahead and take a look here as I wind Rory up to the top part of his golf swing, stays extremely wide, makes big, big rotation, but notice that he's maintained the width in the knees there, which is critical for lower body stability and being able to make sure that you're loading up the correct muscles so that when you start to unload, you get good kinesthetic awareness and make sure that your body is anchored to the ground.

As he starts to work in transition, he's going sit into that left side and that's a great way to start to get the leverage ready to roll out of the golf swing is making sure that you get into the left side of the body properly. We have a video on the website called Sitting Into the Left Side. You're going to hear us talk about that video a lot. For all of you lower body people that want to learn how to leverage the ground, it's going to be absolutely pivotal that you use the left side of the body to control things that are going on. There's no better player out there in modern golf that does that than Rory McIlroy. He's known for really being able to stall his hips and then be able to pull the power out of the ground and then in turn turn it into a lot of club head speed.

He's right around 119 to 120 mile an hour range and he hits the ball a ton. You can see as he starts to work down, he's starting to sit into his left side. Now, what you're going to notice here is as his hands start to lower below this belt line that I originally drew, his belt is actually going to start to raise. His hands are going down into the hitting area and his belt is starting to come back up. At this point, he's stalled the hips and he's ready to release through lag and release and then extension through the hitting area, which is absolutely critical for making a lot of speed at the right time. Now, what I want you to notice here is as I work him back down into impact, that he's maintained the exact same width that he started with at the address position.

You can see a lot of players will start to ... That you've heard a lot golf instruction actually say have that right knee kiss the left. What that's doing is it's allowing for you to push off the right side and when you push off the right side, what can happen is your hips will start to come forward, your spine will start to go vertical, and then in turn you can create a lot of mess with ball striking problems, so a very similar style move here to Tiger. You're going to see his belt start to come back up as his hands start to drop below that line and then at the impact zone, you can see that he's also maintained that width beautifully between the knees. We have a great video on the website call Sitting Into the Left Side. We also have How the Lower Body Works. Both of those are in the program downswing section.

We also have another video that deals with lower body stability and the rotary connect. I know that there's a lot of Rotary Swing fanatics out there that have been looking for the rotary connect and I got great news. It looks like we're getting those back in stock here in the next week or two, so we'll be sending out pre-orders for those things. Rotary connect is a great tool to put in between your knees or just above the knees and it's going to help you keep that width between there so you learn how to sit into that left side properly. You can use those left obliques to pull that left hip away from the target and teach yourself how to stall. If you don't have kinesthetic awareness of these particular moves, then you're basically just putting band-aids on things.

You need to be able to make sure that you feel the correct body movements or the correct change within the body to make efficient power and efficient speed. You can see again from 2014 to 2001, both players making right around the same speed. There hasn't been really a lot of change in what they did to make a lot of leverage or a lot of efficient speed. You can see that they both made a small squat into that left side in transition. You can see that they both maintain lag and they also maintain the width in the knees in order to be able to leverage and pull that power out of the ground. All right, guys. I look forward to working more with you guys in the future. Put these videos to use that I mentioned before.

Also, the Straight Left Leg at Impact video, I know that I've mentioned that a little bit in the past. Check those videos out, get that lower body really anchored to the ground, use it for power, then learn how to lag and release the golf club properly and you'll make a ton of speed as well. All right. I look forward to working more with you guys in the future and I hope you have a great day.