Tiger Woods - Back to RST

Tiger Woods - Back to RST

Tiger said in his press conference on Tuesday at the 2015 Phoenix Open, that he is having a lot more fun now because his clubhead speed is back! In the new video, I'll show a great new look to Tigers backswing and I'll show you how it mirrors the RST model swing almost perfectly. We knew that if Tiger wanted his speed back that he must get into a much more vertical position at the top of his swing. This will hopefully save his body in the downswing and keep him healthy for the 2015 season. 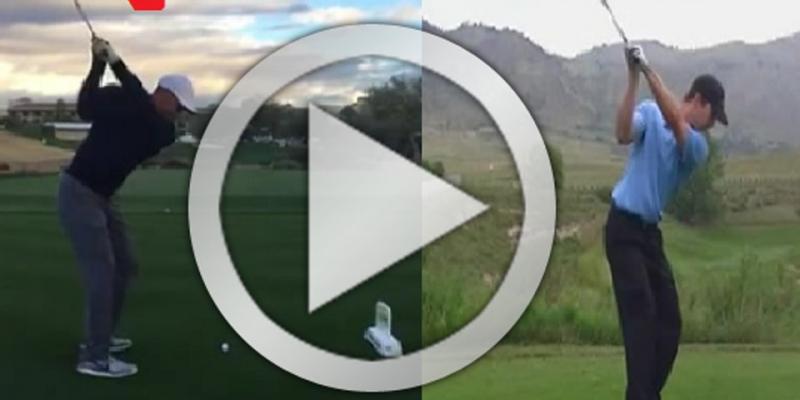 RotarySwing golfers. This is RST instructor Chris Tyler giving you a second look at Tiger's newly built golf swing. And, I got great news for you guys, it looks likes he getting back into almost a full RST form with his swing.

I know in the previous years when we were starting to look at his golf swing, we started to see a little bit flatter, and a little bit deeper, of the position of his hands and his arms at the top of the swing.

He openly spoke about his speed coming back in his press conference yesterday. It's going to be attributed to a really good solid position at the top of his back swing.

This is going to be our second look at his new move here, and I've got to model swing over here on the right hand side of the screen, so you can really see how it's very similar to what we're doing here at RST.

I'm going to go ahead and work Tiger into the takeaway, here. We're going to look at some of the similarities. There's a completed take away. Model swing wise, this is of Chuck Quinton, the founder of RotarySwing.

A couple of key points to take a look at. If you look where the club head is in line with the hands. Elevation point is pretty much spot on. Also, notice lower body. Lower body looks very, very stable at this point. You can see that left leg starting to move just a fraction. Hips have rotated, maybe five degrees or so.

Tiger has always had a ton of lower body stability, and this is a really critical move for you golfers at home that have always noticed that you're seeing too much of your lead leg. End of the take away. That's really going to show you that there's some pelvic instability. Double check to make sure that you're loading up your trail side properly.

This is a position that Tiger's not going to really have to spin his lower body really hard to get out of the way. We were seeing that, and then we were also noticing that he would have to steepen his shoulder plain, post impact to help hold the hands and arms out in front of him. We're really pleased to see this. We're really thinking that Tiger's going to do some great damage with this golf swing, and it's certainly exciting to see his speed come back as well.

A couple of good videos for you guys to check out, is 'Five Minutes to a Perfect Backswing'. That's a great video that's going to show you how to create the same sort of swing shape, just like we're seeing from a model swing. Where you're either going to look like Chuck or Tiger at the top of the move. We also have, 'Five Minutes to a Perfect Backswing Check Points' video.

We also have a pool noodle shoulder elevation video, that's going to talk to you about proper shoulder elevation, and give you a couple of key check points. I'm going to put those video over to the right hand side of the video player for you guys.

Again, I just wanted to give you guys another second look here at Tiger's new RST look. We're excited to see it. Now, lets get out there and put the speed and power back into your golf swing as well. Make it a great day

Get Your Free Membership to Finish Watching "Tiger Woods - Back to RST " Right Now!

Get Your Free Membership to Finish Watching "Tiger Woods - Back to RST " Right Now!