For push releasers, the Tape Drill will give you a good visual for how the club face should work in the downswing. This is best for those who are seeking to fade the ball. 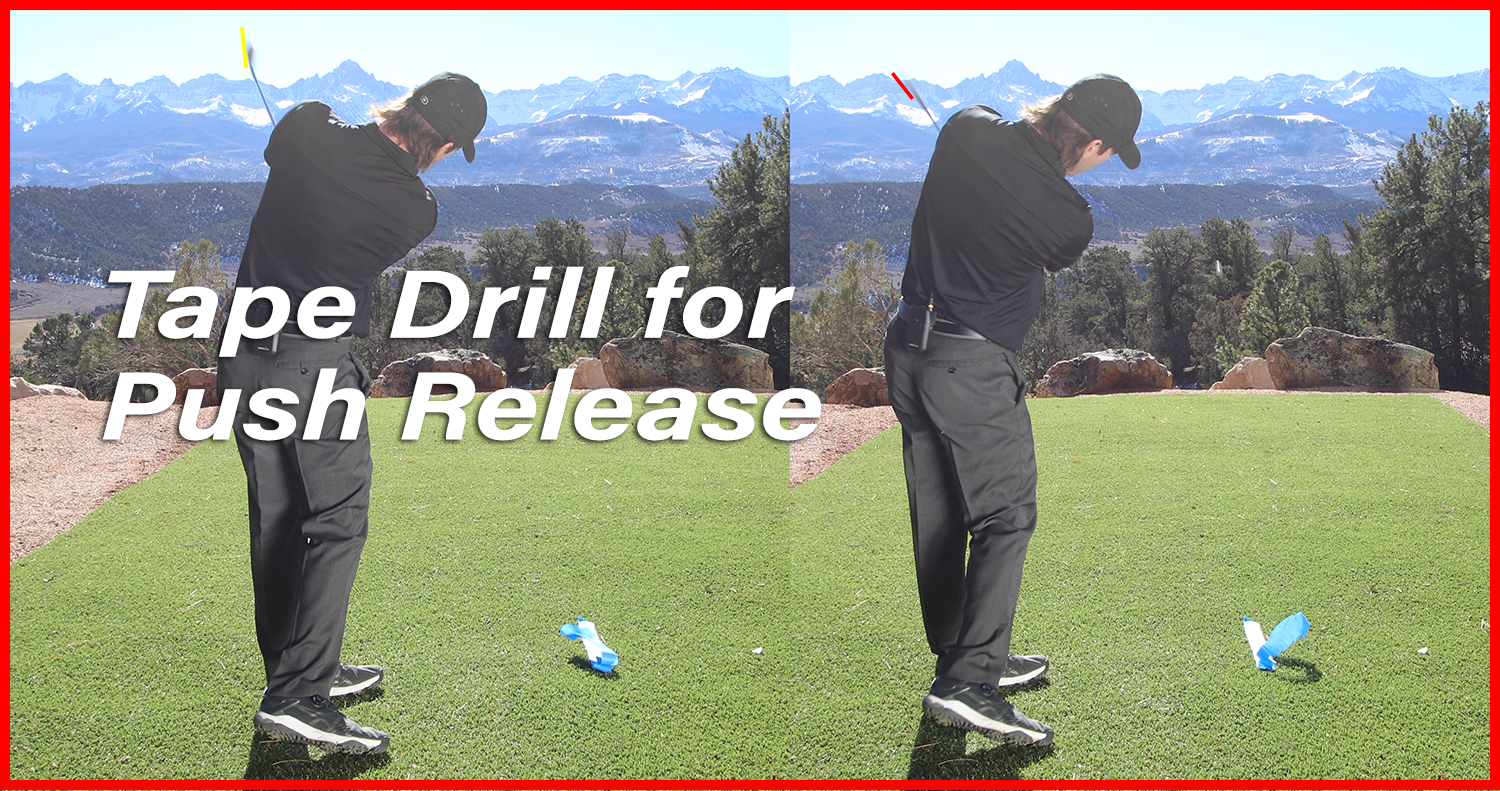 For those of you who are implementing a push release in the golf swing I want to give you one simple drill that'll help you understand exactly  how to use the right arm to add stability to the club face and also to help you understand exactly what you're trying to do with the club. So, first off, let me be clear that when you're using a push release, you shouldn't be going to the top and firing the right arm. Everything else is exactly the same. Your arms still have to be relatively passive to allow them to shallow out first using your hips, using your core, to bring the arms back down to the delivery area. So don't think you're going to the top and then just got free reign to just fire from the top. That's going to still lead to a million different swing flaws.

So, instead understand that the release in the golf swing, everything is basically the same until we get down into the release area. Otherwise we'd just be dominating the swing with the right arm and swinging over the top and slicing and all that stuff. So in order to understand how to release the club properly, all you need is about four feet of tape. Of course, it could be anything. It could be a club laying on the ground, but I like to use tape cause it obviously it lays flat and gives me a good visual path for what I'm going to do with the club. So right arm back, like I talked about in this right arm video to simplify your swing and reduce the amount of elevation in your swing to make it a lot easier to hit these effortless shots. My arms aren't really going to do much. Has I started coming down now is when things are going to start to be able to allow this right arm to start to work.

And this is where the tape comes in and a normal release where you're just a centrifical force where you're letting your left arms be very soft. Your lead side, be very soft and the club just releases. The club will naturally want to rotate a little bit more. That's a lot easier to hit a draw. If that's what shot shape that you're looking for using your body and letting the club release. If you're looking to have more control over a fade, then the push release may be more ideal for you. It's a lot easier to keep the club face from closing down on you and start hitting the ball to go left to, right? If you're a right-handed golfer with a push release and that's really one of its biggest advantages. So if you're looking to hit a cut, what you'll do from this point as the club is coming down at this point is when you're going to start to extend that right arm, the trail arm down this tape line. And what you're looking for

Is for the club, from your perspective to look like it's going straight down that tape with the club face remaining very square. As I mentioned in a, in a normal release where we're just passively letting the club turn over the club would come in square and then begin to close over again. This is what makes it so much easier to hit a draw. But if you're wanting to hold the face to keep it nice and square and, or actually holding it open during the release to some degree again, this is where the fade comes in.

Then using this piece tape, once you get down here. So I've got the tape just about where the ball would be a little bit back in my stance of where the, the tape is a little bit behind where my ball would be, but as I'm working the club down, now I'm starting to use my right arm. And I don't like the word push.

It's not even really a thrust because it's still, it's not an aggressive motion. It's not like you're trying to force it to happen. It's a gliding motion. It's not a right arm shove. I kind of think it was like a right arm glide, but no matter what you call it, as I'm doing this, now I'm beginning to work that shaft or work the club, head down the tape in a square fashion to holding it open. This is again what makes it so easy to hit the cut? So as you're doing this, as you're working at home, a great way to practice is to start hitting chip shots like this, put a ball on the tape. And then as you're working through on your chip video it, or just watch the club go down the tape line and you can see for a chip shot, this is a great release or Romo is really a lack thereof to some degree with a push release to start understanding how to hit these really, really good crisp chip shots and pitch shots, where the club is staying very, very stable. You don't need a lot of power in those.

So you're sacrificing a little bit of clubface rotational speed for the sake of gaining some accuracy or preferring to hit a cut practicing with these short shots, we'll make it really, really easy. So in your home and your backyard, throw some tape on the ground, you got some short grass and start working the club down that line. You'll notice as you do this in order for you to be able to keep the club

Going down the line, as long as you can, without the face rotating over that your right shoulder will need to move with the club. Otherwise you'll run out of something to hit with and you'll run out of right arm. And you'll start having to flip that club face over, which defeats the purpose, the biggest benefit of that push release. So you'll watch that my right shoulder is going with it a little bit through the shot in order to keep that club face, traveling parallel or perpendicular to that tapeline as long as possible. And again, when you're hitting full shots, you'll find that it's so much easier as you're driving through with that right arm and right side to hold the face open to hit that nice little butter fade. So work on the tape drill. If you're wanting to go to a push release, if you're wanting to hit a fade, you'll find it much easier to do so if you're wanting to hit an, a nice little draw as you're coming through that club's is going to release nice and easy and effortless, and you're just going to get out of its way.